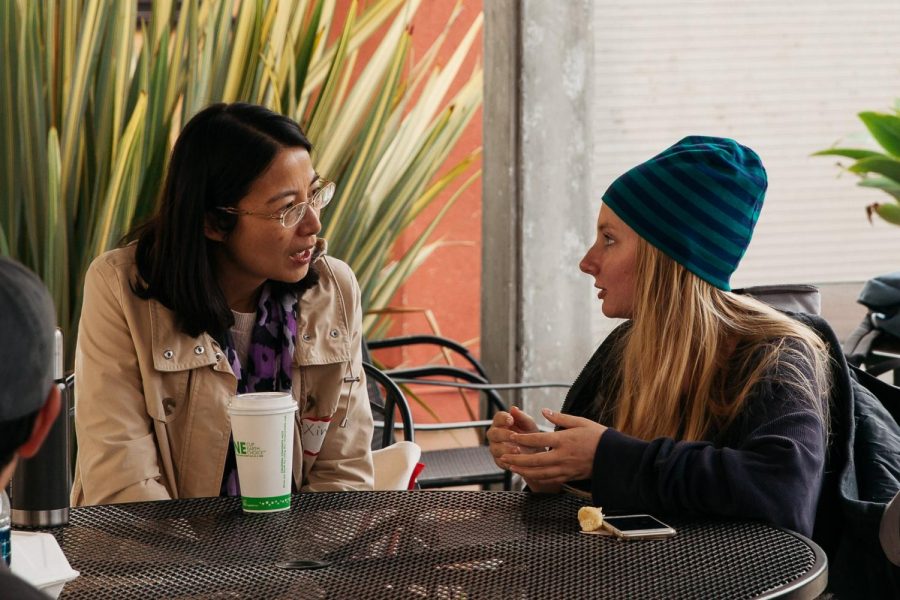 From left, ESL members Xin Zhang and Katenin Gunenberg discuss language at a group meeting on Thursday, Feb. 14, 2019, on east campus at City College in Santa Barbara, Calif. Members of ESL meet with a partner fluent in the language they intend to improve to practice speaking.

The program, which originated in 2005, has been revived in collaboration with the International Student Support Program, the English as a Second Language Department and the School of Modern Languages. The renewed program has already attracted 140 students who are interested in improving their language skills, learning about different cultures and making new friends.

“We want to encourage globalization and unification through language,” Program Lead Bruce Xu said. “This program is a win-win situation for all those who participate.”

This peer-driven program pairs students who are interested in exchanging Spanish, Japanese, Chinese, Korean and English— classes for which are offered by the School of Modern Languages.

Xu said that he wants to create lifelong learners of language and cultures by partnering students with similar interests and language goals based on the questions answered when student enrollment form.

Justin Grounds, a computer engineer student at City College, said his interest in speaking Korean came after a study abroad trip to Korea he took through City College.  He said he hopes to improve his language skills through the program to make himself more marketable for Korean employment while simultaneously engaging in cultural exchange.

“Whenever I learn a language I always try to find a native speaker,” Grounds said. “One of the doors that allow you to step into a culture is through its language.”

International Student Advisor Shelby Arthur said that although this isn’t the first time a language exchange program has been offered in the school, she hopes that the collaboration with the ESL

Department and the School of Modern Languages will allow the program to be institutionalized through the International Student office.

“We are always looking for different ways to support the integration of international students into the SBCC community,” Arthur said. “Connecting people in a way that is going to give them a positive experience outside of their comfort zone is a significant contribution to their education.”

Arthur continued saying that she would like to see more languages offered through the program, specifically the languages that aren’t always available every semester but are still displayed in the City College catalog like Arabic or Portuguese.

Although registration for this program has already closed, monthly mixers are held at the Food Pantry patio on East Campus and are open to anyone interested in language and culture.  Registration will reopen the first two weeks of the Fall 2019 semester.

This story has been corrected to address one error. The ESL program will be offering Portuguese in the future, not Latin due to being a “dead language,” said Shelby Arthur.