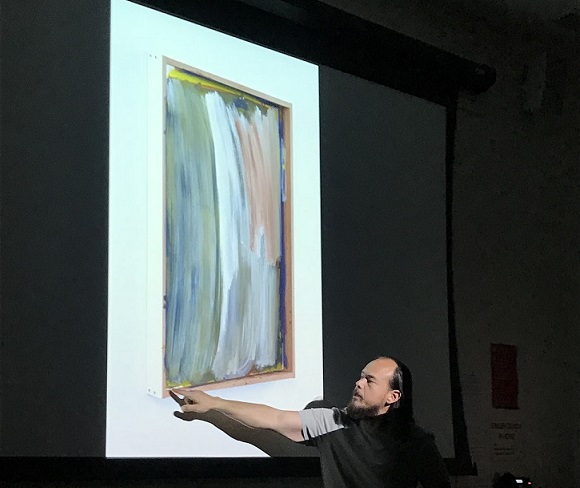 Greg Kozaki explains the details in one of his abstract pieces. Kozaki is a City College art instructor in addition to being abstract artist.

Greg Kozaki, a City College art instructor and abstract artist unintentionally began his artist career with a notebook, a pencil, and an idea that things don’t always have to be complete.

Kozaki spoke Friday on the history and process of the art he makes. He is currently teaching his second semester of art and painting classes and said he enjoys making new pieces in his studio in south central LA— area he calls home. A lot of his work has no rhyme or reason, doodles of vertical and horizontal lines layered on top of each other, with eraser markings indented here and there or contradicting labels that didn’t particularly correlate with the piece.

“When I first started making art I never thought I would use a notebook,” the artist said, pointing at a projector display of twenty six stacked well-used notebooks. “I thought I was above that.” Many of his earlier sketches are what he considers creative output, some simply being lists, notes, and thoughts jotted on paper.

It wasn’t until a two year project he worked on collaboratively for Los Angeles County Museum of Art did he really explore the nature of his inherent fabrication skills. Kozaki said realized he had the capacity and understanding to work on parts of a two-year fabrication project without once stepping foot in the studio. During his free time between teaching classes, he said he wanted to explore his skills more.

One of the biggest projects he worked on was with an author who needed a 10 by 12 foot full wall bookcase installed to their house. Kozaki went through a slideshow of each sketch of the bookcase and walked the audience through his developmental processes.

The bookcase project inspired a hands-on sense with woodwork, which much of his recent art is created with. Although his work varies from home furniture to sketch pads, his current work exists in wooden window frames in which he coats with a transparent glass with painted wood and relies on feeling to disrupt the rest.

As an artist he always has an eye for platform, detail, and abstract experience like when he simply traces the same area or pattern with a sharpie to create sort of a metallic duality on thin paper.

As an early painter Kozaki also refused to use a paintbrush instead using aluminum sheets as brushes to paint. He leaves most of his personal pieces as ‘untitled’ with a few exceptions, but prefers not to complicate the perception of what is being created.

Much of his work,  now inspired by his personal taste, builds “reaction or creating scenarios for myself to react to.. I enjoy that.” Subject matter is a formal element for “breakthroughs” which he often uses to create visually duality in his work where it may be one piece, with two paintings existing in the same nature simultaneously. If a piece appears plain to Kozaki is motivated to disrupt it with another color, creating the dualistic perception with a variety of color scales, aesthetics, schemes, and patterns.

The professor is currently on term for next semester and continues to spend much of his time outside the classroom working on projects for clients or himself.