Chumash Native, activist on the injustices of indigenous people 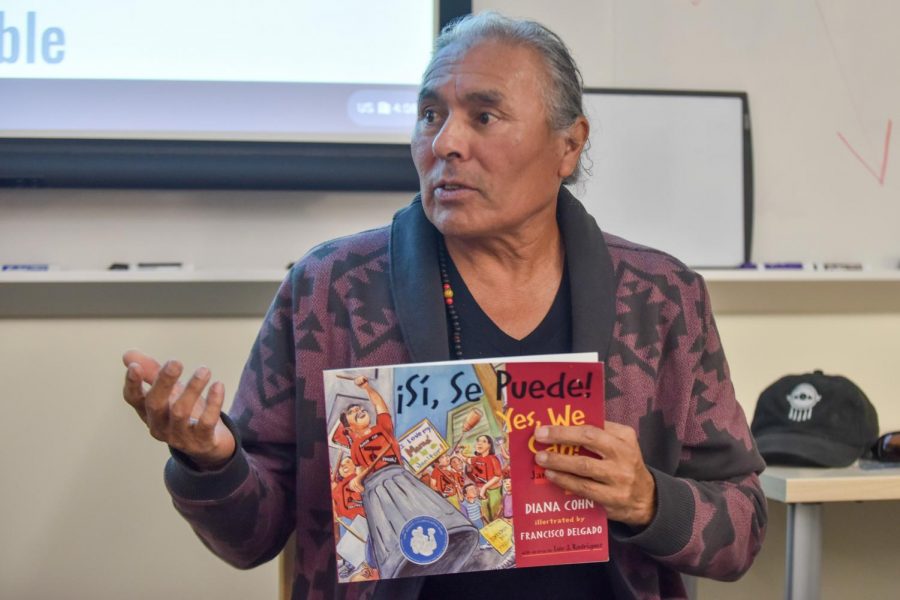 Marcus Lopez Sr. talks to students during the “A Conversation with Exploring Indigenous Self-Determination and its Impact” event on Tuesday, Nov. 13, 2018, at the West Campus Center at City College in Santa Barbara, Calif. Lopez, a former City College student, spent much of his life fighting for equality.

In honor of Native American Heritage month, the Equity Center invited Marcus Lopez, a Chumash Native, activist and public speaker to give a lecture about the history between the American government and Native Americans, as well as his hopes for the future.

Roxane Pate, program advisor for the Equity Center, said that she wanted to diversify the presentations given, and present a wider range of opinions.

“We wanted to bring someone in from the local indigenous community to talk about issues related to reclamation and self determination,” she said.

Lopez spent much of his life fighting for equality, even as a student at City College many years ago. He said that after going to a Chicano club’s meeting with a friend, he was immediately made the president.

After college, Lopez has spent his time trying to educate the public about the reality of what the American government has done, all while protesting the continuing inequality and fighting for their rights.

“The American government has a history of extermination and elimination of the native,” he said. Additionally, Lopez said, he hadn’t learned the true story about how America was “discovered” when he was in school.

He told stories about how land was not only taken, but the natives were brutalized and painted as savages and that during the gold rush, people could even turn in the scalps of natives in exchange for money.

Lopez said that as time went on, he saw a change. Chumash natives went from farm workers and laborers to lawyers, teachers, and doctors. There were issues within the community for some time, small differences between the tribes, but that they needed to be put aside.

“We need to forget about our individual issues and put our collective issues at the forefront,” he said.

In addition to his speech, he suggested everyone read the book “Sí Se Puede” (Yes we can) by Diana Cohn, a book based during the Janitor Strike of 2000 along with many other books from inspirational Native poets and writers, to books detailing the horrors enacted by the American government onto the natives.

Lopez said that he looks to the youth of today for hope. He recalls so many young people standing by him when fighting for standing rock, or fighting to prevent climate change.

“A new social consciousness is being born,” he said.

Lopez advised students to never give up hope and find to ways to stay motivated, and that to solve or address a problem, organizing would be their greatest tool.