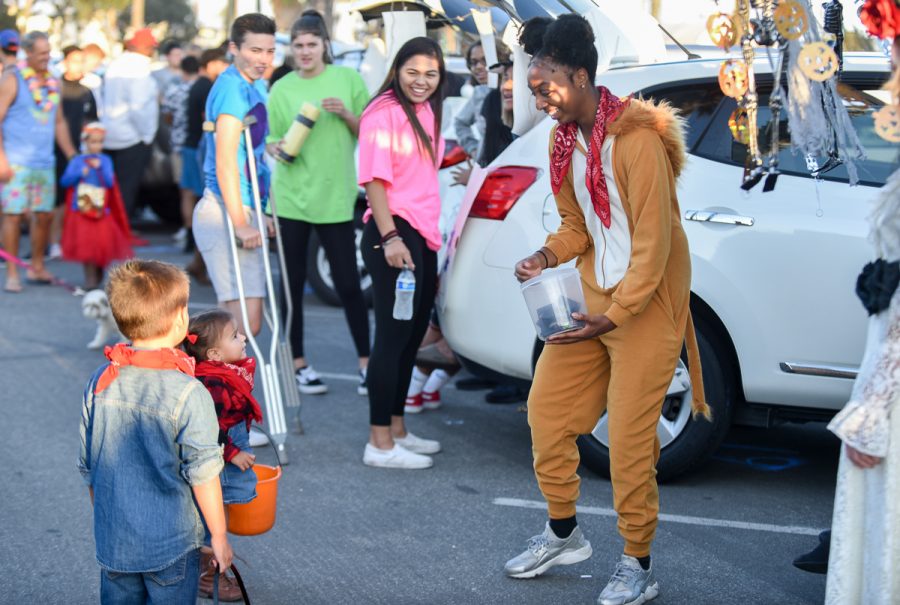 Megan Moore, dressed up as lion, passes out candy to Mila Boardman during the second annual Trunk or Treat event held at the parking lot adjacent to La Playa Stadium on Friday, Oct. 26, at City College in Santa Barbara Calif. The free event was hosted by the City College Athletic Department to give children a safe place to trick-or-treat.

The athletic department and the student ambassadors organization teamed up for the second year to host the Trunk or Treat event in parking lot 2-C just outside of La Playa Stadium Friday night.

Fourteen out of the nineteen sports teams on campus were able to participate in the event, where student athletes were happy to offer up their cars for decoration to host local trick or treaters. With just hours to prepare, students’ cars were painted with pumpkins and covered in webs, stickers, plastic bugs, ghosts, ghouls, ribbons and gravestones.

Together a batgirl, a lizard and a fairy stole the dance floor as they took on the cha cha slide with the cheerleading team dancing, singing, and guessing the identity of each others’ costumes throughout the night.

Athletic Director Rocco Constantino said the student ambassadors and some professors donated the candy for the event. He added that this year’s turnout was higher than expected and his favorite parts were seeing the kids’ creative costumes and having the athletes represent the school.

Early into the event, the captain of the women’s basketball team, Lauren Noggle, offered to pick up more candy when it was running low. “We’re really happy to be doing it here,” Constantino said. He added that last year’s turn out was so high they ran out of candy.

Noggle, dressed as a bluebird, said she heard about the event through the sports captain council, where all the captains from each sports team try to meet once to twice a month to discuss events, activities, and fundraising for the athletic department.

Two year old power ranger Olivia Cole could be seen running full speed around the event with a smile. Her mother, Nicole Dominiquez, said her daughter was really excited to be there. A facebook advertisement had sparked her initial interest to come.

Many families at the event also plan on going trick or treating on Halloween night, and most kids said they were already on their second or third costume of the season heard.

Even passerbyers came to check out the event. Curious about all the commotion surrounding their normal exercise spot, community members Raul Roger and Reagan Erdman both agreed it was a fun event and a nice opportunity for kids to get candy.

Parents Tiffany and Justin Rizzo-Weaver dressed up with their three kids to come out to celebrate with their “nana” Sonia Rizzo, who was visiting from Northern Yosemite.

“I don’t get trick or treaters up in the mountains, so this is awesome,” Rizzo said.

The family had heard about the event through a Starr King parent-child workshop and Tiffany  Rizzo-Weaver said, “it’s a great way to get both students and kids involved.”