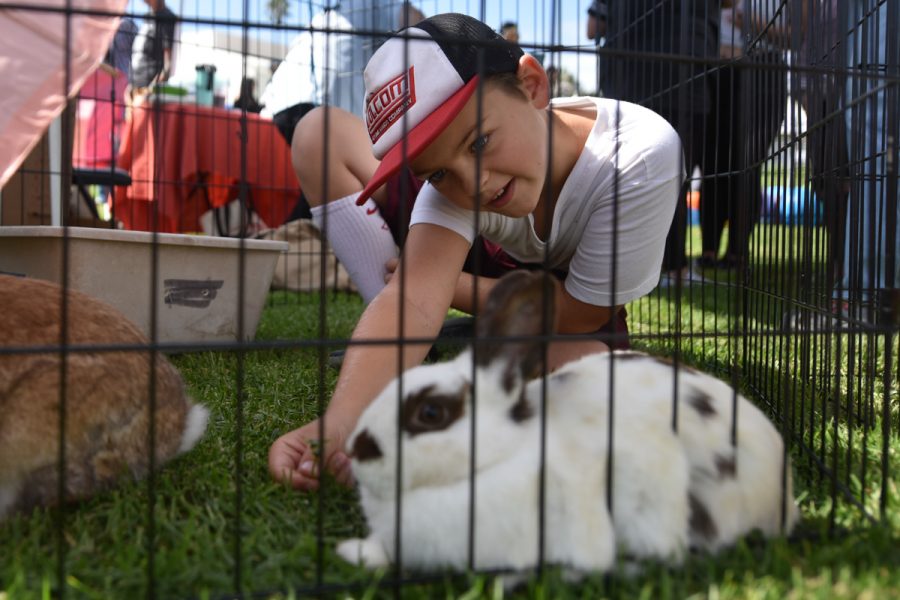 Nine-year-old Taylor Herald plays with a bunny named Pearl at the 10th annual Wags n’ Whiskers Festival on Saturday, Oct. 13, 2018, at City College in Santa Barbara Calif. The bunny, along with many others, is available for adoption through Bunnies Urgently Needing Shelter at the Santa Barbara Animal Shelter.

“Wags n’ Whiskers is a festival with the purpose of bringing the community together to support the animal shelters, reduce animal overpopulation and to find forever homes to some of the animals,” said Isabelle Gullo, festival organizer and co-founder of C.A.R.E.4Paws.

Every once in a while, the visitors could hear the sound of bells ringing from the stage. The bells were an indicator that a four-legged friend had found a forever home. On average, 30-40 animals are adopted at this festival every year, according to Gullo.

“The animals that are up for adoption at the shelters are usually donated by previous owners or rescued from the streets,” said Julia Samuels, a volunteer at C.A.R.E.4Paws.

The festival offered more than adoption possibilities. It also offered a series of different activities and shows. Among the activities offered were lotteries and a dunking booth featuring firefighters, a dog haute fashion show, animal x-factor, a “pawparazzi” photobooth and a dog agility show.

This year the festival shined a little extra light on the first responders to the mudslides and the Thomas fire that was raging through the county from December through mid-January. The reason why the organizers choose to do this is as a reminder that the firefighters not only just saved us humans but also our pets and wildlife animals.

Four-legged animals were not the only ones offered for adoption at the festival. It also offered the chance to fill out an application form to be able to adopt birds, however they could not be adopted on-site.

Besides the basic requirements that all 25 animal shelters ask before adopting a pet such as having a lifestyle fit for the specific animal an adopter is interested in, the bird sanctuary also had additional requirements. For example, they must live within a 60-mile radius from the sanctuary. There was also opportunities to fill out a form of interest in adopting a reptile from Ahimsa Animal Rescue.

Ginny Hunter, one of the employees at Ahimsa Animal Rescue, was showing off her 10-year-old Ball Python named Monty and said that in order to be able to adopt a reptile you need to prove you have the appropriate equipment to take gear of one, such as an aquarium where the reptile can live comfortably and happily for the rest of its life.