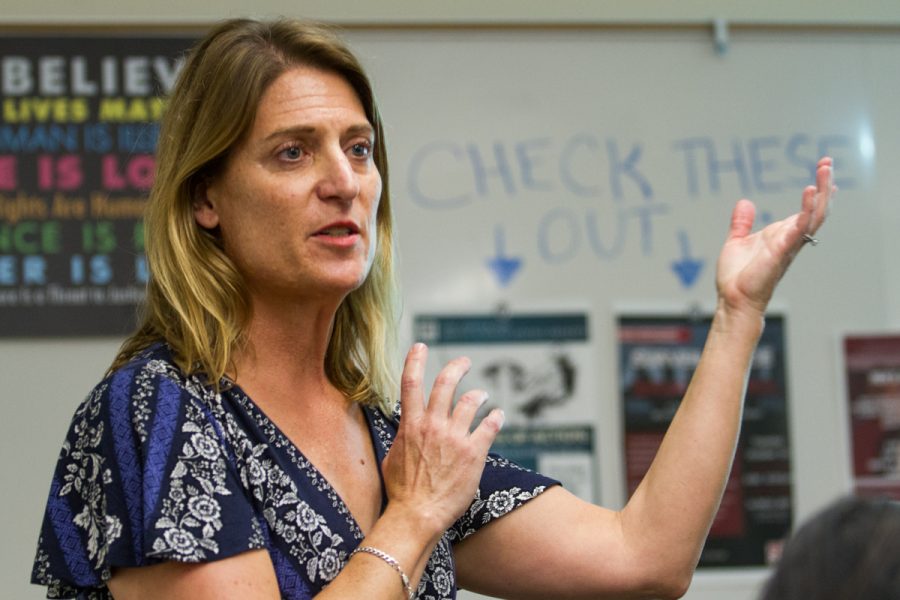 History Professor Danielle Swiontek gives a lecture on “20 Minutes of Action: The History of Rape Culture in the U.S.” at the West Campus Center at City College in Santa Barbara, Calif., on Thursday, Oct. 12, 2018.

An event titled “20 Minutes of Action” discussed the issue of rape culture in a historical context using current cases to illustrate points during a lecture on Thursday in the Equity Center.

In wake of the recent nomination of Judge Brett Kavanaugh, students gathered for an event which explored the history of rape culture and provided a space for discussion. The lecturer was Danielle Swiontek, a feminist and history professor who specializes in women’s studies.

The event was presented by The Center for Equity and Social Justice at SBCC, a group which puts on lectures about social issues such as race, gender, class etc. on a regular basis.

Politics aside, the discussion sought to to answer one comprehensive question: how do we change the culture around rape?

“There are a lot of ways we could slice into the nomination hearings, but I’m just going to use it as a frame for looking at rape culture on display,” Swiontek said.

Historically, rape has been perpetually redefined by the dominant lawmakers of the time, particularly in early America. Under a legal system dominated by white males, the issue of rape was advertently muted.

For instance, prior to the civil rights movement, in many states American marriages adhered to the laws of coverture, a doctrine which granted men sole ownership over their wives. In addition, validity of sexual consent was contingent on citizenship, or otherwise ignored.

Swiontek suggested that “black women speaking out on sexual assault helped fuel the civil rights movement.” In a nation poised precariously between white male dominance and female subordination, rape victims of color such as Recy Taylor (1944, Abbeville, AL) lifted the voices of the unheard.

Primarily, it is the reigning societal structure of the time that shapes rape culture. Sexual assault has been an issue throughout all of history but in 2018 it is still one of the major social issues discussed.

By nature, situations of rape are complex and difficult to define, thus easily circumvented by perpetrators. There are little guidelines for prosecuting the accused without empirical evidence.

Without formal boundaries, crimes are neglected, victims are silenced and criminalization is evaded.

“When a person is a victim of sexual assault, their life is impacted forever, but we negate that. We dismiss it,” said Student Program Advisor Roxane Pate.

“That is a steep price to pay for 20 minutes of action out of his 20 plus years of life,” wrote Dan A. Turner, in a plea to judges to reconsider sentencing his son to prison. “His life will never be the one that he dreamed about and worked so hard to achieve.”

The quote prompted Swiontek to join forces with Pate to create a series which “gives a voice to the underrepresented individuals and communities.”

After a national scandal, the conversation about sexual assault is at the forefront of society, which has “awakened the beast,” she said. They are left “feeling triggered, and in a way assaulted” in regards to the Kavanaugh verdict.

During the latter half of the event, the audience engaged in an emotionally charged discussion.

Most agreed to effectively resolve this issue, children must learn to establish a sense of ownership over their bodies early on.

“We need to start educating everyone, not just boys, but girls as well, to understand what consent means from a young age and to continue that message throughout their educational period” said audience member, Zoe Donnenfield.

Swiontek agreed, adding “I never forced my kids to kiss their grandparents.”

According to the presentation, “1 in 3 women are assaulted by the time they are 18.” In the same breath, Swiontek reaffirmed the popular hashtag #NotAllMen.

Swiontek cited that only 10 percent of men are assaulters and the ones who are tend to be serial predators, often having already raped an average of seven women before being convicted. In which case, research accredits such behavior to a low capacity for empathy.

These statistics reflect the alarming prevalence of sexual violence within our culture. What’s more, every 98 seconds, an American is sexually assaulted. These norms infiltrate the fabric of society and dilute the severity of sexual violence.