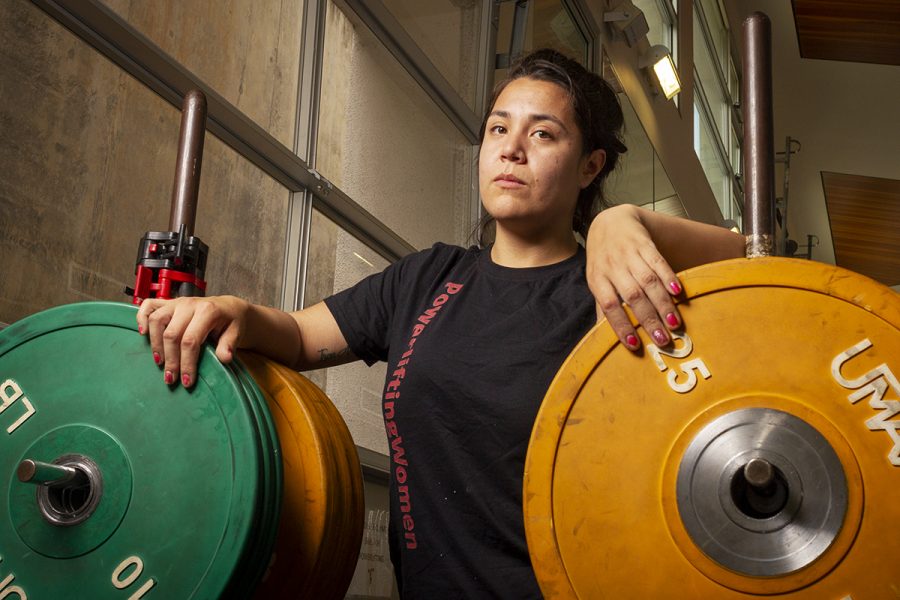 Krissy Sanchez on Tuesday, May 1 in the Life Fitness Center at Santa Barbara City College. Sanchez is empowered by lifting weights and says it changed her outlook on life.

We all hit a point in life that we feel insecure about ourselves, but what defines us is how we respond to it.  Kristine Sanchez not only responded, but turned her life around on a journey that is truly inspirational.

Sanchez’s journey started four and a half years ago when she realized she wasn’t happy with herself or life in general because she was overweight and didn’t know how to change.

“I just felt really off,” Sanchez said. “I knew I wanted to look better, I know that I wanted to feel better but I didn’t know to get there and I felt stuck. It felt like I was in a really dark room and I didn’t know how to get out.”

Sanchez decided to register for a PE class in the Life Fitness Center at Santa Barbara City College. She said she never intended to come back to the center daily once the class ended, but after her first completed workout she said she felt awesome  and that is what sparked her to continue to come back.

Early on in her journey Sanchez met Sandrine Krul, the women’s basketball coach at City College. She became Sanchez’s mentor.

Krul has known Sanchez for two years now and said she has seen major changes in her.

“At the start it was a struggle for her because she realized for her to get mentally and physically healthy she has to change and do a complete overhaul of her life,” Krul said. “She wanted it so quick, so we would talk about doing it one step at a time.

“Now fast forward two years later not only has she hit every weight loss goal and strength training goal, but she is also hitting the goals for her academic path.”

Once Sanchez started working out on a daily basis she was starting to see results but her journey, like any journey, has not been an easy one.

There have been roadblocks and she has not always received the results she wanted right away, but she didn’t let that stop her and she continued to challenge herself mentally and physically because she knew that she had to see it through to the end.

“I restricted a lot of my eating for awhile because I had a fear of gaining the weight back,” Sanchez said. “ I was sexually assaulted in September 2016 and that has been my biggest challenge on my journey.”

She said going through that affected her journey to health because she became uncomfortable in her own body which almost led her to quit exercising altogether. But, during that time Sanchez credits Krul for introducing her to power lifting and that is how she began to enjoy working out again and to take control of her own body and health.

“Through power lifting I found myself again and it reignited my passion for fitness,” Sanchez said. “No matter what has happened the barbell has and will always be there to bring comfort. The iron is honestly the greatest antidepressant.”

Sanchez has also gotten to know Melissa Gutierrez, who teaches multiple PE classes at City College such as spinning and kickboxing. Gutierrez has also become a mentor for Sanchez and has been a big influence for her.

“She has become a completely different person,” Gutierrez said. “I’ve seen a level of self confidence that has not been there, I feel like physically that she is not only more healthier but in better shape and she has matured and is not the same women that came here four years ago.”

Krul and Gutierrez have been Sanchez’s biggest supporters on her journey. Sanchez has lost more than 50 pounds since she started working out. She has become a power lifter who competes in power lifting competitions across the state.

She also competes in 5k races around the state like the color run. But, the biggest races she competes in are the spartan races which are obstacle courses which are mostly held in mountains. Some of the obstacles for a spartan race include climbing over 12 foot walls and carrying heavy buckets filled with rocks.

She has also become a peer mentor and a trainer for athletes on campus. She is learning to become an athletic instructor as she is an intern for the PE department and is interning to learn how to teach spinning and kickboxing classes.

“I didn’t expect that at all,” Sanchez said. “It’s definitely a surreal experience because I never expected that to happen and it’s the best feeling ever. Working with athletes has to the most rewarding thing.”

Michaela Berber is a member of the women’s basketball team who was trained by Kristine last semester.

“She was super inspirational and very motivational,” Berber said. “She taught me that no matter how big the obstacle to just keep pushing yourself because eventually you will get through it.”

Sanchez has learned almost every aspect of conditioning and is applying it to athletes for multiple sports. She sometimes still can’t believe that the person she once was has become the person she is today

“Sometimes it doesn’t feel real,” Sanchez said. “It’s been such a big transformation inside and out, it makes me feel grateful that I am not who I was or how I looked like four years ago. I just feel really blessed that I was able to do this and I did a lot of it on my own so it feels good.”

Sanchez will graduate City College in two years with her associate in science in kinesiology. She wants to transfer to either San Diego State or Long Beach State and get her degree in kinesiology with an emphasis on physical education and get her minors in exercise physiology. She said she eventually wants to work up to obtaining her masters and also become a strength and conditioning coach for athletes.