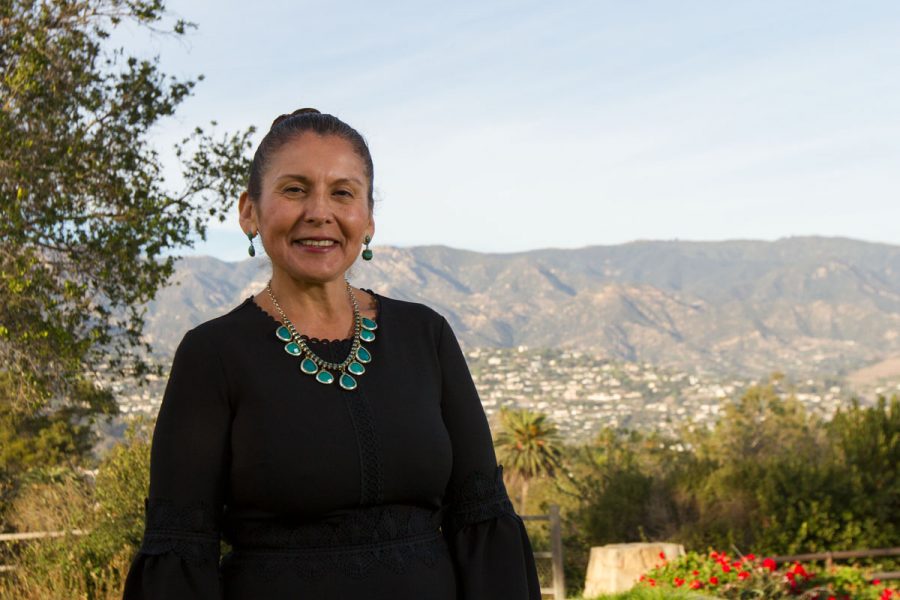 Monalisa Hasson, the new Human Resources vice president, Monday, Nov. 13, at the Winslow-Maxwell Overlook. Hasson is replacing Patricia English, who retired at the end of June.

Monalisa Hasson is the new vice president of Human Resources. The Santa Barbara native often reflects on the journey that took her from being a college dropout and newly married 19 year old to having one of the top five positions at this prestigious two-year college.

“I always think, ‘Gosh, how did this happen to this little girl,’ from where I came from and the things we went through,” she said.

As head of human resources, she oversees the welfare of some 1240 employees at City College. She is hoping that her personal background, professional experience and ongoing engagement in higher education will help her help employees do a good job working with students.

But her return to Santa Barbara is special.

“My dream was always to come back here and finish my career at the college,” she said. “And it’s like I never left.”

Santa Barbara is her birthplace, and her family has been a part of the community since the 1700s. Her father grew up, went to high school and was later buried here.

“When we walked State Street, everybody knew him,” she said. “He would be stopped everywhere we went.”

“This was their home.”

Hasson’s father owned the restaurant “Cielito Lindo” in Carpinteria. The regulars at the restaurants were temporary migrant workers, mostly Mexican men, who sought out the restaurant because it gave them a sense of home. Hasson’s parents cooked the meals they were used to eating with their families they had left behind.

The family eventually decided to move to El Segundo, and the restaurant closed down. The father died shortly after the move and suddenly, her mother was left running the household’s finances and bringing up seven children on her own. Hasson’s mother, who was a migrant worker from Mexico and didn’t speak English, had to turn to her children for help.

“When my father passed away I was just about to turn 8,” she explained. “I had to grow up really fast.’’

Hasson remembers sitting down with her mom and helping her with the bills.

“I saw her determination and her tenacity, demonstrated through all that, and I thought ‘wow.’”

Having to guide herself though her school years, she found support in the “social capital” her school provided, such as teachers and mentors. This is something she brings with her to her work in human resources.

“We need to have that [support] for those students that are like that, and that don’t have that,” she said.

“It was a good thing for me to have, because otherwise I don’t know if I would have made it.”

She later attended El Camino College, but working night shifts and going to school in the daytime quickly became too difficult. She still remembers her mother’s reaction when she told her that she might have to quit her job, an important puzzle piece in her family’s financing.

“She didn’t say anything, but her face just dropped.”

Hasson ended up dropping out of school instead, and getting married at 19.

When her children got older, she went back and attended community college. She later transferred and completed both her bachelor’s degree and master’s degree while her three kids were in their teenage years. Hasson attended to one of her dream schools for her master’s degree, Pepperdine University. She received her doctorate at University of Southern California in 2011.

Inglewood Board Member Carol Raines Brown worked tightly with Hasson while they were on the board together. Brown describes Hasson as someone who is “worth their weight in gold.”

“She is an incredible person who has the desire to see students, and people, succeed,” she said.

“She allowed her staff to also take leadership roles.”

Hasson describes her own leadership as being focused on involving her co-workers in how, and why, something should be done.

“I think it is important that your team understands the importance of your work,” she said. “Everything we do in human resources is connected to the students.”

“The title [vice president] is great, but the work is more important.”