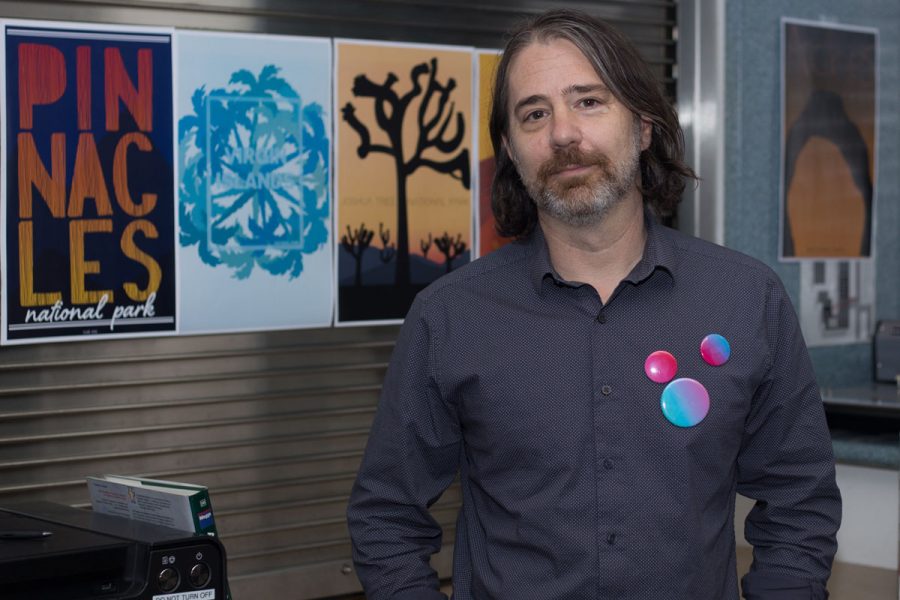 James Vanarsdale stands in his office with some of his students work Wednesday, Oct. 18, at City College. Vanarsdale is a Santa Barbara based graphic designer who was brought in to rebuild the graphic design program.

City College’s new head of graphic design James Van Arsdale’s office is scattered with eye stimulating visuals from his and his students’ projects as he explains how he plans to equip his students with the necessary skills of the modern marketplace.

“I have a lot of experience in my field. I have been working professionally for more than 15 years now,” said Van Arsdale. “What I offer to the college is my real world experience in graphic design; how does it feel and what it means to work everyday on different projects with different clients.”

Van Arsdale has a community oriented agenda as he hopes that his stay at City College will help the aspiring artists to advocate change, and in turn, benefit the community as a whole.

“SBCC is a great asset to this community,” he said. “Being part of this institution allows me to be a supportive member of the arts community.”

The graphic designer pointed out that the goal of the programme is to provide students from different majors with creative problem solving skills, which he says is essential in today’s marketplace.

“Graphic design is very powerful. It enables you to communicate with the world and create culture. [The] ability to create ideas and convey them has become influential today because of the internet,” he said.

“It can also be a way to enrich lives of people coming into contact with your work, by conveying important messages and influencing people to make the world a better place.”

Van Arsdale is an ardent believer in the power of visuals and their ability to impel people’s minds.

He said that it is an artist’s responsibility to connect people, create culture and give back to community. He encourages his students to do the same.

“It is really cool because he is allowing and encouraging us to express ourselves,” said Melena Sagschneiderm, a graphic design student from Germany.

“The class is very fun,” added Renate Sjoevik of Sweden, another international student enrolled in a Van Arsdale’s class. “It is easy for us to understand him. He gives us an insight of what and how the clients need their products, something that will definitely help us in this profession.”

The Colorado-born graphic designer has been an artist for most of his life. He was part of different rock bands in his earlier life such as the Indie rock group The Coral Sea, which he recorded 2 albums, 2 singles and an EP with. He is also the founder of music collective-psych rock space band Heavy Cosmic Kinetic.

“I always played music. I feel a void if I don’t,” said Van Arsdale.

Van Arsdale was born to a father with a military background. His mother made a living from photography.

“I get my technical side from my dad and the artistic side from my mom,” he said, adding that they are the two elements that make up a good graphic designer.

He attended Brookhaven Community College in Dallas, TX, which is another reason he believes in the importance of a city college system.

“I started in a community college and I want to give back,” he said. “I want my students to be excited about their projects, [by] mostly creating projects that speak to their taste. It is good for communicating their messages.”

A previous version misspelled the subject’s last name as “Vanarsdale.” The article has been updated to correct the mistake.