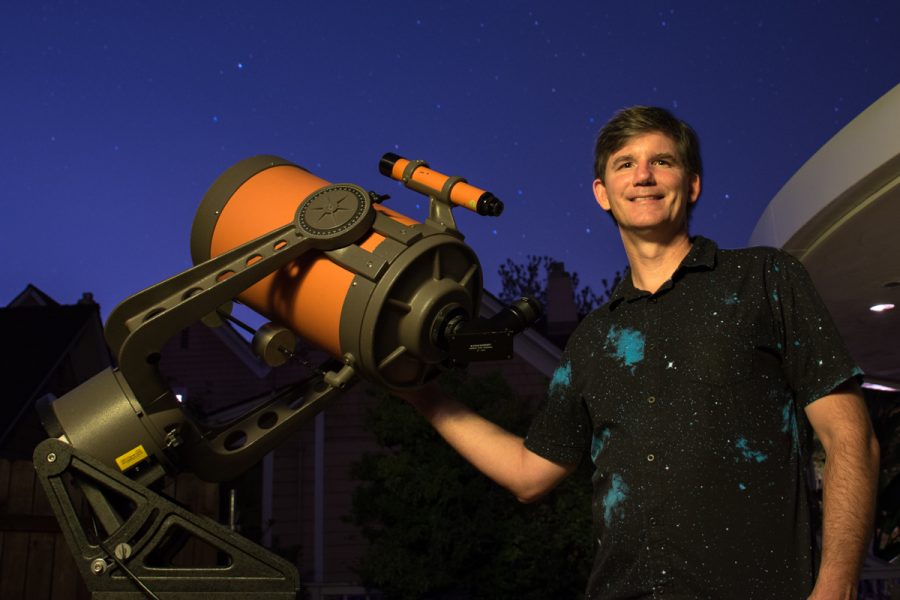 City College astronomy instructor Dr. Sean Kelly outside the Palmer Observatory Wednesday, Oct. 18, at the Museum Of Natural History in Santa Barbara, Calif. “Astronomy is beautiful, and I think that human beings too often see the ugliness, but this is a beautiful science that gives us a sense of how small we are.”

Dr. Sean Kelly was 8 years old when he thought to himself, “I want to become a nuclear physicist.”

Kelly, who teaches astronomy, the astronomy lab, the physics lab, and the seasonally offered astrophysics class will light up when asked a question regarding space.

“I’ve always loved science fiction,” Kelly said. “I still dream about going into space. I hope I’m not too old. But [students] are young enough now that they’ll be able to take a vacation to orbit, or to the moon, or to mars.”

He said his scientific interests sparked as a child, after an expert explained to him how the sun functions. Once he found out that nuclear physicists tend to work in nuclear power-plants, he decided against his dreams, yet his love for the physics remained.

The Santa Barbara local struggled with physics in high school, but his interest resurged after taking a physics class at City College.

“I wasn’t very good at it in high school,” he said. “I was kind of bored. But I came to City College in the summer before senior year and I loved it. It was so much fun. We did experiments, and it was everything I had hoped it would be.”

The full-time tenure-track professor carries a bachelor’s degree in physics from UCSB, and a doctorate in solid-state physics from Brooklyn College.

Kelly said he applies his personal college studies into his astronomy lectures, to help students grasp a more thorough understanding of planetary sciences.

“I always try to give the benefit of my experience,” he said. “I think that adds to it, and lets [students] understand that there’s a deeper connection to the basic things we learn”

He said he particularly enjoys teaching his astrophysics class when it is offered, because it is more quantitative.

“I really do enjoy getting to the nitty-gritty,” Kelly said. “I love the messiness of the work. One of the things a physicist learns to do is to embrace that, and to not be afraid of it, and to just enjoy the fact that it is complex. It makes it more beautiful, not less beautiful.”

Jessica MacFarlane, president of the physics club, and former student of Kelly’s said his passion for space shines through in the classes he teaches.

“He is super inspiring,” MacFarlane said. “He is a great teacher. He really dives into the subjects and he loves every single bit of teaching.”

Kelly is also involved in the Santa Barbara Astronomical Unit, and is adviser of the astronomy club.

“I have the best job ever,” Kelly said. “Even though it’s introductory, I’m getting to share with my students for the first time this knowledge that’s amazing.”