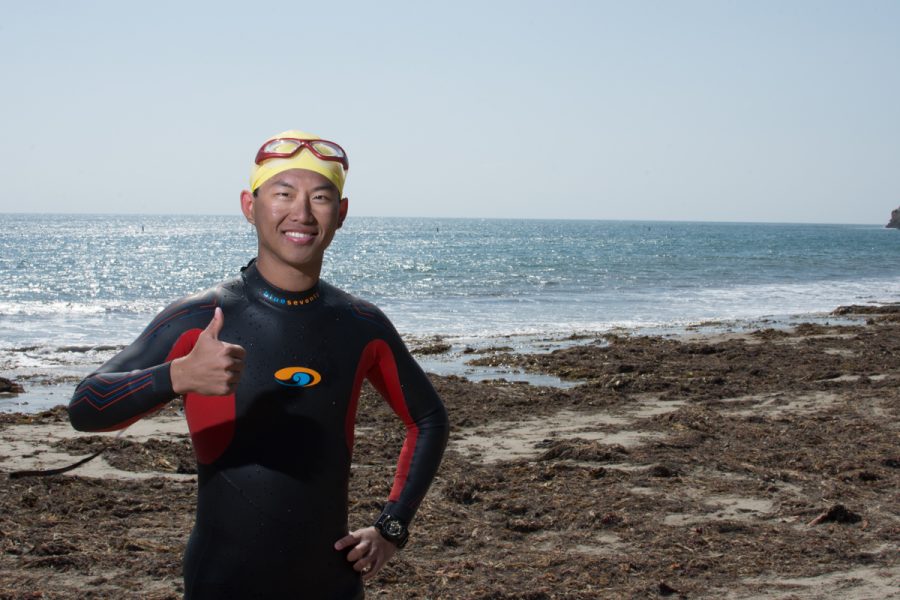 Gordon Xia, a City College international student, during his swimming class Oct. 12, at Leadbetter Beach in Santa Barbara, Calif. Xia is majoring in computer science and plans to transfer to UC Berkeley or UCSB.

This is a simple story about a young Chinese student who came to Santa Barbara and learned how to swim.

The student failed his PE class swim assessment before attempting and completing a 1000 meter ocean swim for the first time.

Liangchen Xia, who goes by Gordon, came to City College about a year and a half ago. He began taking swim classes because of his desire to learn to surf, after his teacher informed him he would need to pass several tests in a pool before moving to ocean swimming.

“Gordon is an incredible and gracious student who is so eager to learn,” said Ingrid Schmitz, Xia’s swim instructor. “His enthusiasm to improve is infectious and the other students are in awe of his progress.”

Having never taken a swim class prior to arriving in Santa Barbara, Xia started from scratch learning freestyle swimming to prep for his first ocean swim as well as his goal of surfing. He has been able to take advantage of one on one instruction with Monica Jones, one of the professional volunteers working with the swim program.

“He has done everything we have asked of him and he is reaping the rewards,” said Schmitz. She has helped Xia to pursue his new interests in swimming by pushing him not to quit when he felt challenged.

The Channels met with Xia to discuss his experience in Santa Barbara. The interview has been paraphrased as he is still learning how to speak English.

Xia discussed how excited he was to study in America because of all the new things he is able to try. Speaking to the attitude of people in his hometown of Shanghai, he said it was common for people to spend most days inside studying and working, rather than getting outside and being active.

He voiced that he appreciates how busy his schedule keeps him, from early morning classes to swimming in the afternoon and studying at night.

When asked what drew him to Santa Barbara, Xia talked about how he considered studying in Los Angeles, San Francisco, and New York before finally settling on City College. He spoke about how his family wanted him to choose a safe city to study in, and how he felt the people and environment that Santa Barbara provided were exactly what he was looking for.

Having studied international business in China, Xia spoke about how confined it felt to be stuck on a serious business path so young, as he would have continued his studies through highschool and university before finally getting a job in that field. His choice to study abroad opened up many new opportunities for him.

While currently studying english, reading and writing, Xia is majoring in computer science with plans to transfer to UC Berkeley or UCSB. He said he hopes to turn his interest in video games into a possible career designing and producing them.

Additionally, he is currently participating in kickboxing and training at the gym. He expressed how good it feels to be active and involved in different sports having not participated in extracurricular activities back home.

Going forward, Xia said he may study music and learn to play the piano or guitar, while he advances his education in computer science.