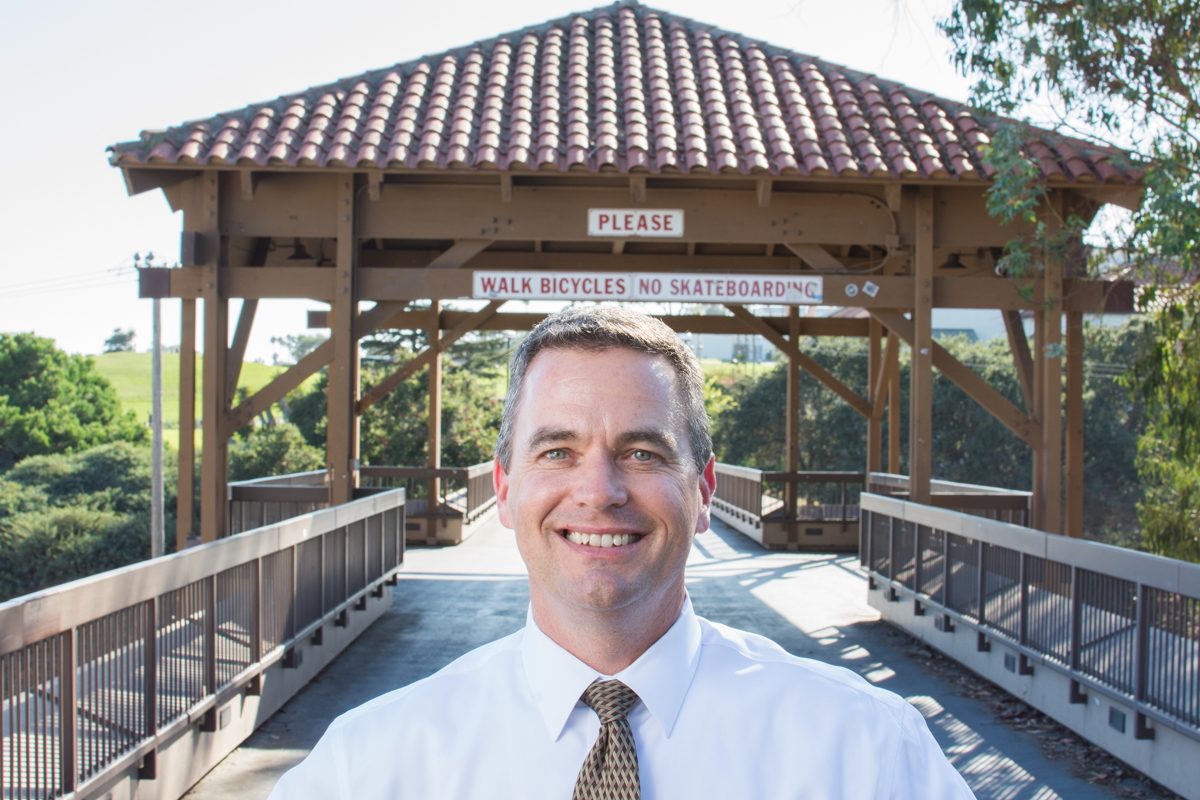 David Saunders, the new justice studies professor, on the bridge Sept. 27 at City College. Saunders is the new Justice Studies instructor and was awarded Outstanding Investigator of the Year by the Ventura County District Attorney’s office in 2002.

After completing a full circle from City College graduate, to law enforcement officer, to teacher,  new full-time justice studies instructor Dave Saunders has taken the lessons he learned in his life with him in the classroom.

“I’ve learned in my journey that you get better results through positive reinforcement rather than negative,” said Saunders.

“So [I am regularly] recognizing and rewarding good work, so there’s often opportunities for bonus points in my class.”

Saunders, a father to two teenage daughters, completed his master’s degree in public administration at the California State University Northridge. He aspires to use his teaching to change the attitude towards law enforcement.

“There’s this huge crisis in America in terms of the breakdown in trust for law enforcement,” said Saunders. “One of the best ways is just starting a whole new generation of people. So the people that come into my class, I get to touch and help influence in a way and hopefully they’ll trust the law enforcement and the system.”

After high school, Saunders attended UCSB which is where he first caught interest in law enforcement. He then switched schools and came to City College in order to get his general education requirements completed. He began taking “Introduction to Administration of Justice”, which he teaches today.

Saunders’ perspective on school changed once he switched to City College.

“I really struggled with school at the time. Then boom, it just clicked,” said Saunders.

Samantha Saavedra, Criminology major, has taken his class prior to this semester and compares him to her other Justice Studies teachers. She says that he frequently uses videos to thoroughly explain what he’s teaching.

“Mr. Saunders really demonstrates what he’s talking about,” said Saavedra. “I feel like he makes his class really fun.”

“He makes it so that we really understand what we’re learning.”

Saunders always makes sure to get to know everybody’s story. He said he believes that everyone comes from different paths in life, so everyone gets a different form of support.

“He’s really a great teacher and a great guy and I feel like he really loves his job,’’ said Saavedra.

“He really makes us feel like we will succeed in life.’’

Saunders was hired by the Santa Barbara Sheriff’s Department while finishing up his bachelor’s degree at the University of Laverne online. He took on an accounting job while working for the Sheriff.

His effective multi-tasking sparked the Ventura Bureau of Investigation’s interest where he later got hired.

“As a person he’s very personable, friendly guy,’’ said Ellis. “He’s very interested in the success of those that he is teaching, but in my case when I worked for him he was interested in my success as his subordinate.”

In 2000, Saunders was awarded Outstanding Investigator of the Year by the Ventura County District Attorney’s office, as well as received awards for his service by the Special Enforcements Team and the Santa Barbara Deputy Sheriff’s Office.

But the awards are not the most important achievements in Saunders eyes.

“My greatest satisfaction is stuff that’s inside me and knowing that I’ve done my best,” said Saunders.