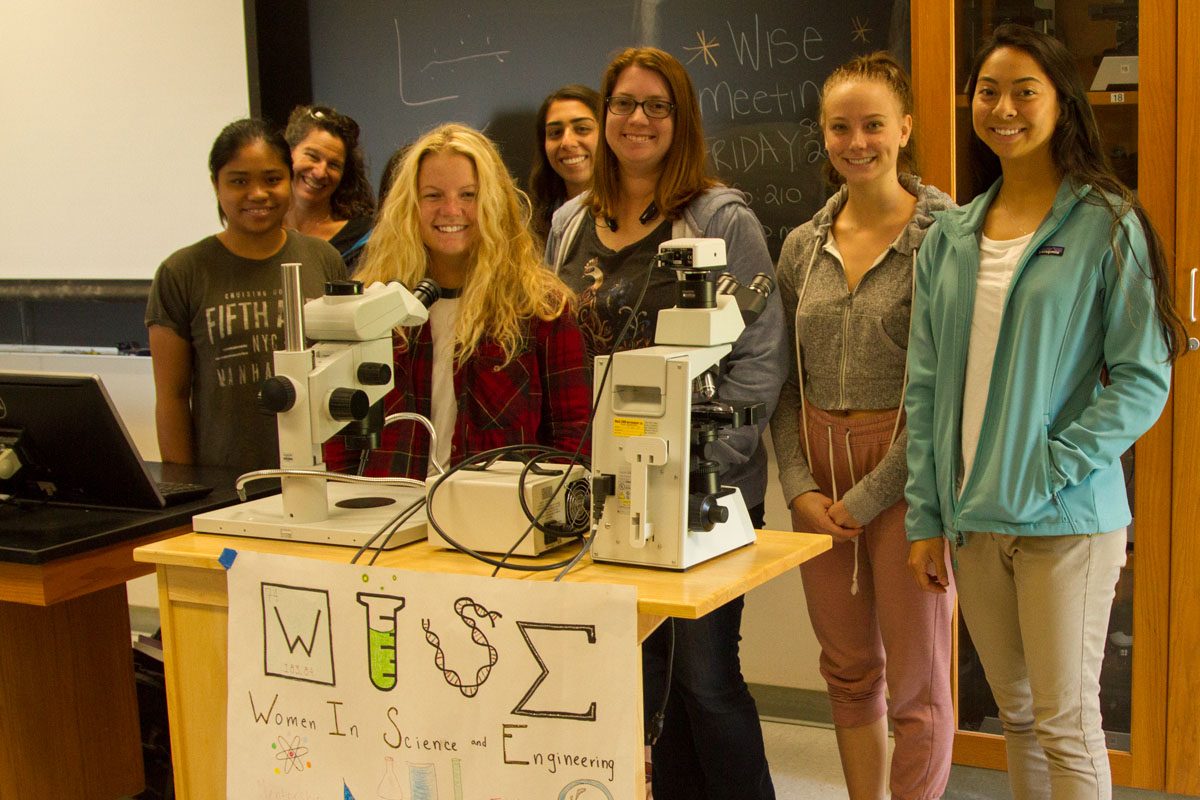 The Women in Science and Engineering club meeting Friday, Sept. 22 in Earth and Biological Sciences Room 210 at City College. The club was meeting to get a workshop for writing their STEM resume and cover letters.

The Women in Science and Engineering Club sets out to address the serious global issue of profound sexism in the vast domain of science, technology, engineering and math, at a community level.

The club is engaging in the ceaseless battle to fight the gender gap and sexism within the field, dubbed as STEM. It provides a space for students to connect and support each other in their academic pursuits, and gain the skills necessary to succeed in the world of academia.

“Even though we’ve made a lot of progress, women are still highly underrepresented in the sciences, particularly in engineering and math,” club advisor Dr. Michelle Paddack said.

Paddack said women often do not enter the field because they do not feel welcome and supported. The club, which calls itself W.I.S.E. sets out to change that paradigm by creating an inclusive community for people to express their interests and ideas.

W.I.S.E. meetings are designed to help provide students not only with not only a community of like-minded people, but also with the skills that aren’t often provided in classrooms, in areas like networking and particularly, leadership.

“I think what we’re seeing a lot in our political world shows up how a leadership style can matter, and how clearly, gender matters,” Paddack said.

Paddack said her role as a female science professor and researcher has complemented her role as the W.I.S.E. club advisor. She also explained the impact the gender gap in the STEM field had on her own academic experience.

“When I was an undergraduate, I knew I wanted to do science. I had great amazing mentors, and none of them were women.

“I wondered if there was a place for me in science, if those faces that I was looking to were all men. I realized over time that I never felt equal to them. I realized then that I was holding myself back with that mindset.”

The student-driven club hosts workshops for making resumes and writing college application essays. It also works with the W.I.S.E. Club at UCSB to connect City College students with mentors in their academic field.

The club aims to take at least one field trip per year. In past years they have visited labs at Cal Poly San Luis Obispo, UCLA, science museums and Vandenberg Air Force Base.

Club Co-President Emily Walker said she wants to let women know that there is a place for  female students in STEM to feel supported.

“Since women in science [fields] are lacking, places like W.I.S.E. give women a ground where they don’t have to feel insecure or intimidated in their classes or in answering questions,” Walker said.

“W.I.S.E. gives women a place to can come together and build each other up and support each other, while we get through our classes and overcome these difficult challenges.”

W.I.S.E. meets at 1 p.m. on the second and fourth Friday of every month in the Earth and Biological Sciences Building Room 210.

The club is welcome to anyone regardless of their major, interests, and especially, gender. Male students participate in the WISE club, which Paddack says is critical in influencing change.

“If we’re going to change society and the way we address things, we can’t just have that conversation in a closed group. It really needs to be in an open group where everyone comes to the table,” she said.