Vocational nursing director to retire after 18 years at SBCC 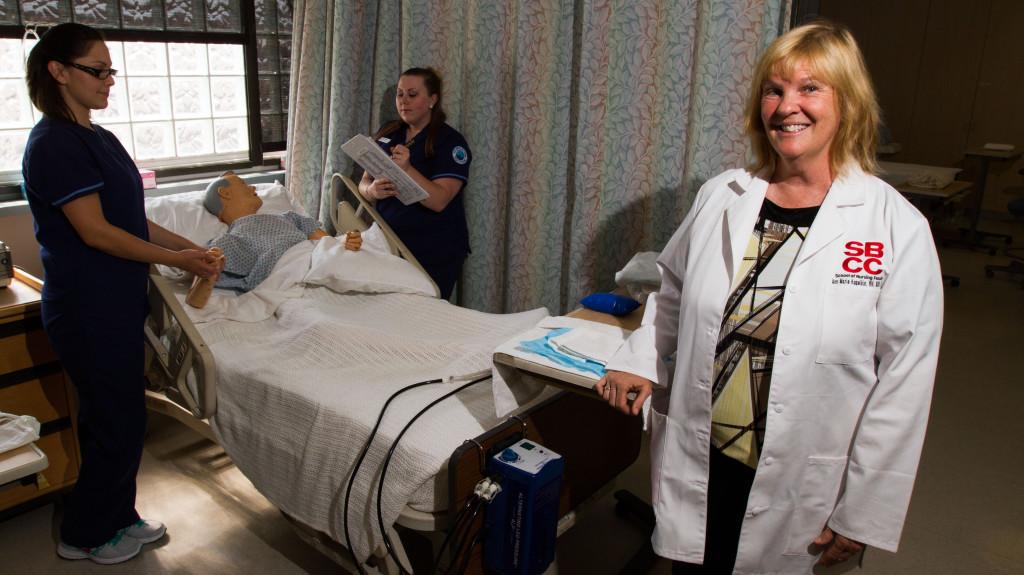 Channels File art of Ann Marie Kopekin with her students, Samantha Hernandez and Stephanie Davison, in the nursing department of the MacDougal Administration Building at City College.

Bouquets of roses and farewell cards surround her desk as Ann Marie Kopeikin, director of the vocational nursing program, prepares for her final semester after 18 years at City College.

Kopeikin is retiring this semester as part of the Supplemental Early Retirement Program.

After being hired in 1996 to develop the Certified Nursing Assistant program’s learning objectives and tests, Kopeikin began teaching vocational nursing at City College in 1999. She has been the director of the program since 2001.

Kopeikin is teaching her students about leadership, mental health and simulation. She also makes sure she teaches her students to balance out compassion with efficiency because a nurse must bring with them “a healing presence.”

In 2013, Kopeikin was one of four in the nation that was presented with the Nurse’s Touch Award, an online curriculum that allows students access to better their professionalism skills for a year and a half. She said she was glad to give her students this opportunity.

Charmaine Pejarro, a former City College international student, is one of many that has been influenced greatly by Kopeikin. In 2011, Kopeikin gave Pejarro a chance to finish her vocational nursing license before her visa expired, but under one condition: she would tutor for the program while she was enrolled in it.

“It was hard to get in the program,” Pejarro said. “I had just arrived from the Philippines and Ann Marie made it possible for me. I owe a lot to her.”

Pejarro graduated from City College in December 2016 and currently works at Santa Barbara Cottage Hospital as a nurse.

Kopeikin explains that she will be focusing on three goals after retirement: family, friends and community service. She will dedicate at least six months to spending time with her family and building relationships. Kopeikin also believes it’s important to give back to the community. She plans on reading to children at Isla Vista Elementary School. She would also like to dedicate some time to animal shelters because of her love for them.

“It was great for the community and great for my students, because the more competence you get in something, the more confidence you get,” she said. “You see this push of efficiency at the cost for compassion.”

Kopeikin is known by her colleagues as being the “most compassionate person” and is always willing to help her students.

“She will be dearly missed,” said Rosette Standberg, assistant director of the vocational nursing program. “She is the most amazing human being on the planet.”