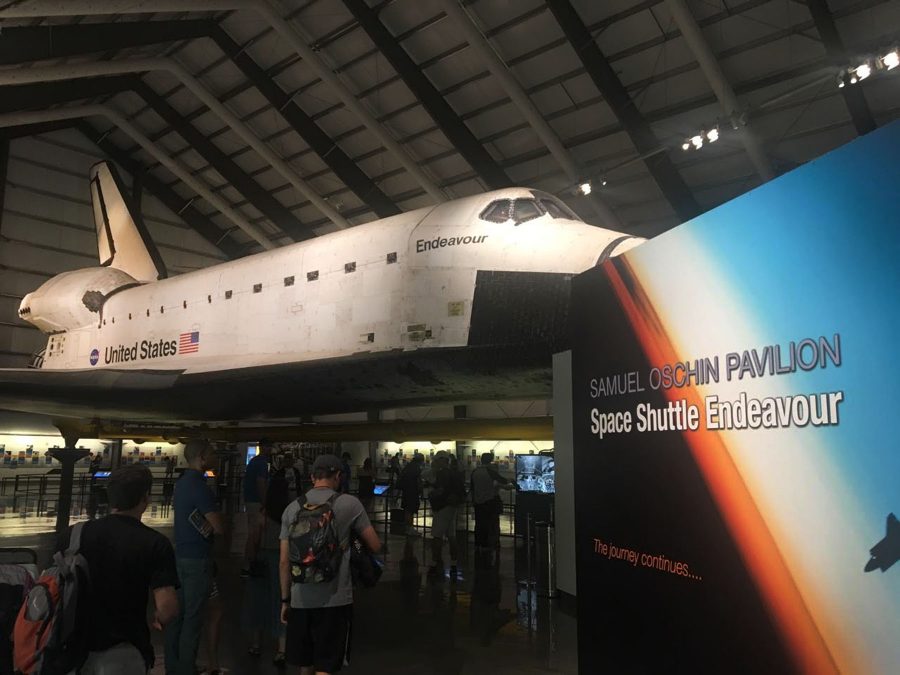 The Space Shuttle Endeavor on April 23, at the California Science Center in Los Angeles. The Endeavor has taken 25 trips outside of Earth's orbit since its first launch in 1992.

Earth and planetary science students had the opportunity to jet away with the Astronomy Club on its field trip to the California Science Center on USC’s campus.

On the journey to the center, the group got to watch a 3-D film in IMAX, see the different exhibits on display and take a tour of a retired NASA space shuttle.

“[The field trip] is a good affirmation of what we learn in class and what SBCC really tries to instill within us,” said Matthew Esguerra, an introductory astronomy student. “It sparks some curiosity and inspiration to go out and learn.”

The film “A Beautiful Planet,” narrated by award-winning actress Jennifer Lawrence, documents astronauts on their arrival to the International Space Station.

The astronauts shared with the camera the way they do everyday tasks like exercise, take a shower and store food and necessities in outer space.

“It was pretty inspiring to see astronauts just weightless,” said Nicholas Currie, an introductory astronomy student. “My favorite part was when they would release their shampoo bottles and they would just float there.”

Footage of Earth from outer space emphasized the importance of sustainability. Shots of California painted a picture for the audience of how serious our recent drought was. Other shots of Africa highlighted the issue of deforestation on our planet.

In between the film showing and tour of the space shuttle, students had the opportunity to explore the science center’s current exhibits and write about them for extra credit in their given classes.

One exhibit, “Earth in Concert: Protecting the Planet through Music,” spotlighted famous artists who have made efforts to spread the message of sustainability through their songs. Jack Johnson, Ziggy Marley and Sting were among these musicians. They all had special guitars, albums, shirts and even a Johnson-signed ukulele on display.

Johnson does a lot to try to prevent plastic pollution on the beach. Marley and Sting use their fame to bring attention to the rain forests.

Visitors of this exhibit could listen to playlists with sustainability-themed music, including “Big Yellow Taxi” by Joni Mitchell.

“Earth in Concert” also focused on the different sounds made in all ecosystems of the wild. Wildebeest calls and whale mating sounds were heard on speakers throughout the room.

The Space Shuttle Endeavour is homed in the Samuel Oschin Air and Space Center.

“My favorite thing is to realize that the space shuttle was a vehicle that took astronauts up to outer space and we can be right next to it and see the immensity of it,” astronomy instructor Sean Kelly said.

The Endeavour has been on 25 missions to space, with flights dating from 1992 to 2011. According to NASA, the Endeavour costed approximately $1.7 billion to build.

Whether it was a spark of inspiration from the film to live more sustainably, more knowledge of our human race’s space expeditions or a NASA sweatshirt from the gift shop, all the students on this trip took something special back to Santa Barbara with them.