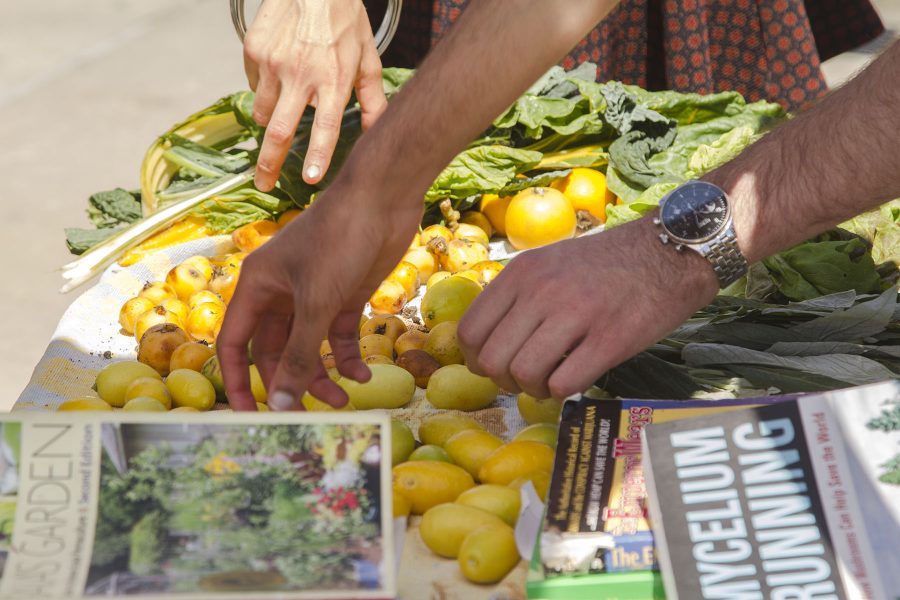 Students who attended won prizes, sampled free healthy snacks, made their own smoothies by riding a bicycle and even got to pet baby swell sharks, all while learning more about the environment.

“Today has been awesome,” City College student Austin Maciey said, while checking out the festival. “I really wish we had events like this on campus more often.”

The global celebration of Earth Day is actually April 22, but City College started the weekend of environmentalism early.

“Everyone here is having a lot of fun and getting interested in the bigger picture,” City College student Anthony Barbero said. “The earth is important and this is a casual setting where people can educate themselves about what the real issues are.”

Earth Day was first established in 1969 in response to a devastating oil spill on the Santa Barbara coast.

In 1970, the first Earth Day was celebrated by over 20 million people. This huge initial success led to the creation of the Environmental Protection Agency and the clean air, clean water and endangered species acts.

Today, the holiday is celebrated in almost 200 countries around the world with millions of participants doing their part to sustain and protect the planet.

Organizations from all over the Santa Barbara area, like the Museum of Natural History, tabled the event alongside City College clubs in front of the Luria Library.

Clubs such as the Student Sustainability Coalition and Vegan Club were in attendance. The coalition’s table offered students free organic fruits and vegetables, and the vegan club sold vegan-friendly baked goods for a dollar.

Jackson Hayes, Associated Student Government commissioner of sustainability, was one of many Student Sustainability Coalition members present and said he was happy to see so many people show up and get involved in the festivities.

“Everyone really came out today, which is great,” Hayes said. “Today is bringing attention to some amazing organizations around Santa Barbara.”

Near the end of the event, Santa Barbara Mayor Helene Schneider spoke to the students and faculty celebrating Earth Day.

Schneider said that events like this one hosted by City College help to create a ripple effect that positively influences the surrounding community.

The mayor also said the city is committed to working towards simple everyday solutions, such as switching to eco-friendly lightbulbs, that will help create positive changes for the environment.

“There are lots of things we can do as both as individuals and organizations, but we have to do it together,” Schneider said.