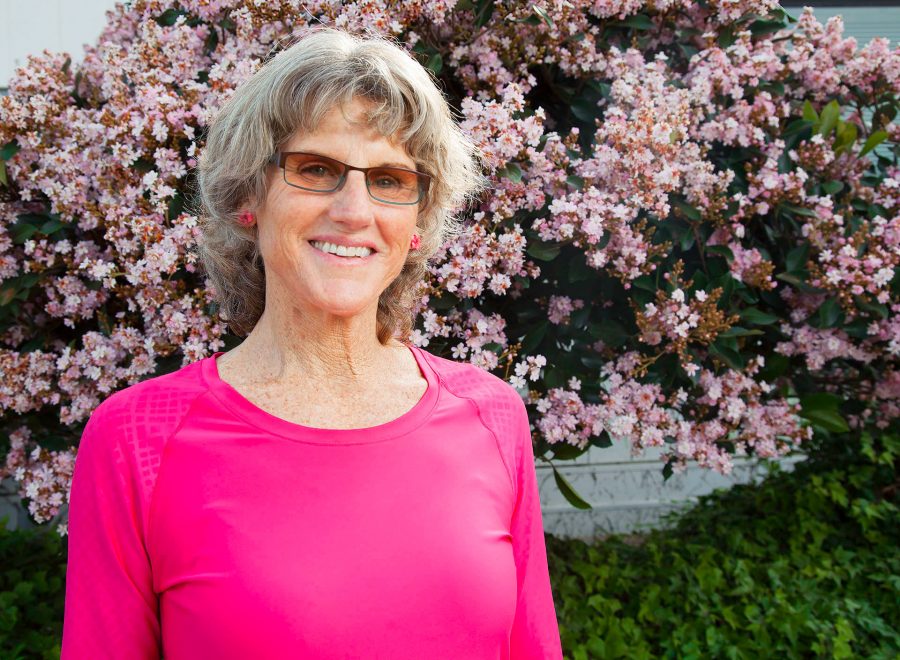 Sally Saenger, physical education instructor, on Tuesday, April 4, outside of the East Campus Classroom buildings at City College. Saenger has been chosen by the Academic Senate for California Community Colleges as the recipient for the 2017 Hayward Award.

This year’s Hayward Award for Excellence in Education was granted to physical education teacher Sally Saenger, the tenth City College employee to win since it was first established in 1989.

Each year the award recognizes four faculty members nominated by their peers from California community colleges who have shown outstanding commitment to their students, profession and college. Recipients of the award receive a plaque along with a $1,250 cash award.

“I feel honored to be chosen as one of the four recipients of the Hayward Award,” Saenger said. “The recognition that comes with it is a bit overwhelming, but very welcome.”

Saenger said that she is very proud to have won this award for more than just the recognition itself, but for the recognition as a part-time faculty member. After winning the Part-Time Faculty Member of the Year award in 2012 and now receiving the Hayward Award, Saenger said she realized it was a part of her DNA to advocate for part-time faculty members.

“Part of it is that I don’t believe in injustice,” she said. “I just want fair and equitable treatment, no matter who it is and it can be challenging as a part time instructor to get that.”

Saenger has been teaching at City College since 1982 as an instructor in the physical education department. She has been actively involved with the Faculty Association Board and served as president for the Continuing Education Instructors’ Association Board for eight years.

In 1996, Saenger founded nonprofit organization Access to Lifelong Fitness. She has also worked with the Arthritis Foundation and Page Youth Center.

Saenger said that the winning of this award hasn’t changed who she is and she still wants to ensure that she is a part of student success whether it’s credit or noncredit.

“I’m grateful for the support that I get and the college itself and that I’ve been able to work within the community college system,”Saenger said. “I feel really fortunate and grateful to be working here and to be recognized in such a nice way.”

Saenger, who teaches the swimming for conditioning courses with beginning, intermediate and advanced classes, said that she loves teaching and seeing the growth in her students throughout the semester.

Biology major Bailey Maldonado said she is taking Saenger’s advanced swimming for conditioning class for fun as well as to stay in shape after playing water polo and being on the swim team in high school.

“Sally is very upbeat, friendly, and approachable,” Maldonado said in a phone interview. “She encourages us to become stronger and faster swimmers during every class.”

Maldonado said that some students go into the class not knowing how to swim very well and after class with Saenger, they show a lot of growth and improvement.

Maldonado said that she loves the class and finds everyone very friendly and enjoys starting her mornings with them.

“The water is a great equalizer,” Saenger said. “All levels can be in there and still be able to get along.”

Saenger said that her father and mother are her two greatest teachers in life. She dedicated her award to her father who passed away six months prior to her winning it.

“Public service, to him, was a really big deal and he’s the one that instilled that in me and he was a good role model,” Saenger said. “I wish he was here for that.”

Correction: April 6, 2017:
This story includes grammatical or spelling corrections to a previous version.

Correction: April 18, 2017
This story was updated to specify phone quotes.