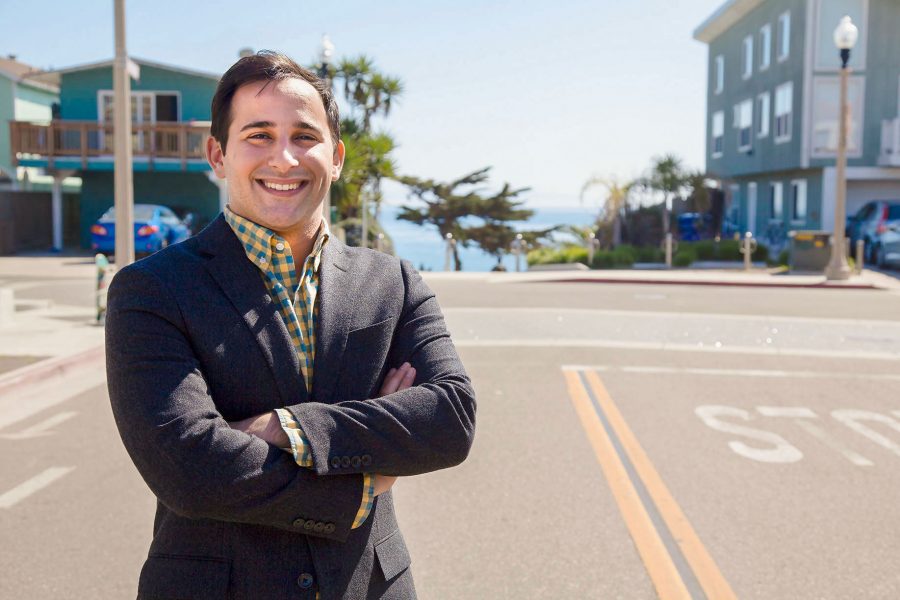 Jonathan Abboud, vice president of the Board of Trustees, on Thursday, March 16, in one of his favorite places in Isla Vista, at the corner of El Embarcadero Rd and Del Playa Road in Isla Vista. Abboud went to the Community College National Legislative Summit to advocate for City College.

During his last trip to Washington D.C. in 2014, Trustee Jonathan Abboud was arrested with UCSB’s student government, after blocking the sidewalk on Sallie Mae, a student loan organization.

In his recent 2017 D.C. trip, Abboud attended the “Community College National Legislative Summit,” and arrived back to City College to enlighten The Board of Trustees with guidance to enhance students’ education. There were no handcuffs involved this time around.

His passion for legislation lead to his vice president position on the Board of Trustees and his newest position as the board’s legislative liaison.

“Now with his new legislative liaison position, he’ll be there to represent us at the national state level,” Superintendent-President Dr. Anthony Beebe said in a phone interview.

Abboud attended the three-day summit to get City College more involved and informed on active legislation.

“We’re the number one community college so we should definitely make our voice heard on these things,” Abboud said.

Over 1,000 community college leaders from around the U.S. were brought together at this event to be educated on federal policy issues that impact colleges and their students.

The most important thing Abboud learned at the event was the possibility that the federal government may impose risk sharing on colleges. This means that colleges would share the responsibility for their students’ loans. According to Abboud, if risk sharing is voted upon and approved, colleges could be on the hook for over $1 million in students’ loan defaults.

“Either we take on the risks and are financially burdened by the loans or we start saying no to people because they are too risky of a student to accept.” he said. “Why should we ever be in that position?”

The idea of year-round pell grants was also discussed at the summit. This would give students the ability to receive financial aid over the summer. If this idea passes, students will be able to take the classes they need without the burden of financial stress holding them back from finishing their education sooner.

According to Abboud, Congressman Salud Carbajal is supportive of the possible addition of summer pell grants and plans on supporting it in Congress.

“We think, even with the Republican Congress, we can get this through within the next year,” Abboud said.

The Santa Barbara Democratic Party will recognize Abboud’s activism in the community and will honor him at its annual dinner on April 8.

From being UCSB’s student president to promptly being elected onto City College’s Board of Trustees, Abboud has no plans to stop progressing anytime soon. He plans to go back to UCSB in the fall to get a master’s in technology management. After that, he wants to attend law school.

Currently, Abboud is also taking on the role as a community organizer with Isla Vista Self-Governance, which had its first meeting on Tuesday, March 14.

He dedicates his life to figuring out and acting on innovative ideas that improve City College and the community.

For example, even before Bernie Sanders, Abboud and his group of colleagues worked on researching how to make tuition free for students. In May, they will travel to the “California Democrat State Convention” in Sacramento to endorse the idea of eliminating student tuition for all colleges in the state of California.

Fresh out of college himself, Abboud is able to bring an educated, yet empathetic perspective to the board and the community that acknowledges the interests of students.

“Because of his youth, he represents the future of Santa Barbara,” Beebe said.