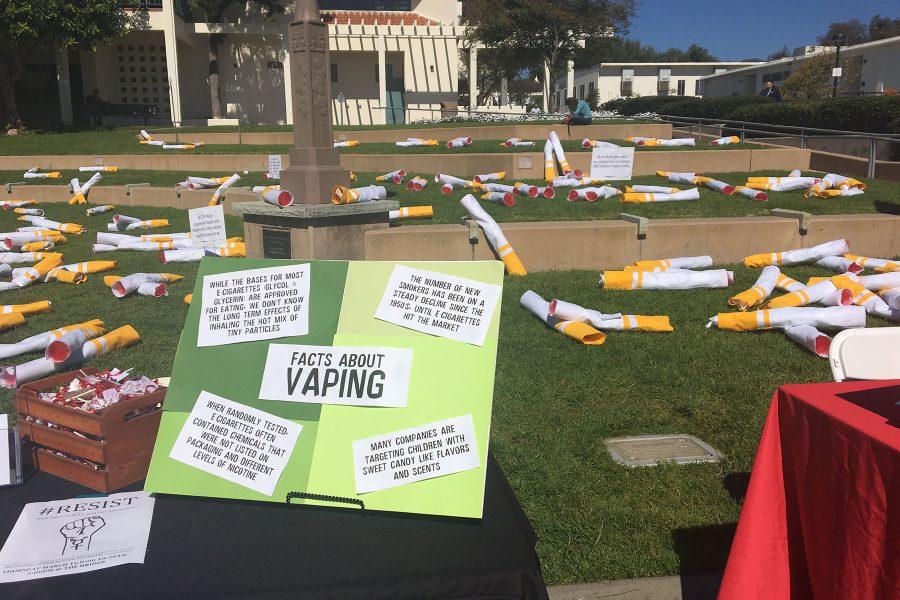 Oversized cigarettes littered on the ground demonstrating butt pollution as a part of “Kick Butts Day” on Wednesday, March 15, at the Friendship Plaza at City College. The event is meant to inform students about tobacco and related products.

Students were unable to look away at the array of 130 oversized cigarettes scattered around Friendship Plaza Wednesday.

The oversized cigarettes were part of City College’s first annual “Kick Butts Day,” which aims to spread awareness and information about tobacco and related products. The Alcohol and Substance Abuse Program and Wellness Connection placed the giant butts to symbolize the 1,300 daily deaths in the U.S. related to tobacco.

According to a 2012 report by the Center for Disease Control, 17.3 percent of adults aged 18 to 24 years old are smokers, which is the age that most people are attending college.

City College student Stephen Grinager, who smokes said that he believes college is a big factor of addiction to tobacco and non-smoking products.

“Tobacco is definitely more prominent on campus, but I think the use of vapes and e-cigarettes is rising [and] we don’t know their major effects yet,” Grinager said.

Pate and Kathryn Magnani, substance abuse program coordinator, received a grant from Center of Tobacco Free Youth to put on the event. They also wanted to make sure they touched on all forms of tobacco and non-cigarette forms of smoking as well.

“I feel like it’s really important to touch on new trends in the tobacco industry and spread awareness,” Magnani said.

Vaping and electronic cigarettes are on the rise as substitutes of smoking but research shows that companies still do not know the full effects or the exact chemicals, according to the event’s vaping posters.

City College specifically put vaping in its policy of being a smoke-free and tobacco-free campus to ensure no loopholes could be made.

About 1,700 colleges are totally smoke-free and about 100 include smoking and vaping marijuana in that clause, according to No-Smoke.

“On campus, we can lower the impact environmentally and clean up butts and encourage ones who do smoke to dispose of them properly,” Pate said.

Although the coordinators said they believe the smoke-free policy is widely respected on campus, just outside the grounds there is still an issue with disposed butt pollution on the ground.

Pate and Magnani even offered students gift cards to pick up 20 cigarette butts on campus and bring them back to dispose of properly as one of the interactive events they had going on.

Students could also guess how many butts there were in a jar, write their connections to tobacco use on cards to place in a giant butt and even spin a wheel of facts and fiction to spread the knowledge about tobacco use.

Magnani and Pate both said they know they can’t get everyone to quit but they want everyone to know their risks and provide any information, counseling or assistance the students seek.

“We want them to be more informed about their decisions,” Magnani said.

Nicotine is the main drug in every form of tobacco and is the most addictive and heavily consumed drug in the U.S., Above the Influence reported.

Conrad Lightfoot, a non-smoker and officer of the Student Sustainability Coalition, said that he thought the event made a “really big statement” and credited vaping and electronic cigarettes as the new enemy.

“I’m happy that I get to come to school every day and breathe fresh air without second hand smoke,” Lightfoot said.