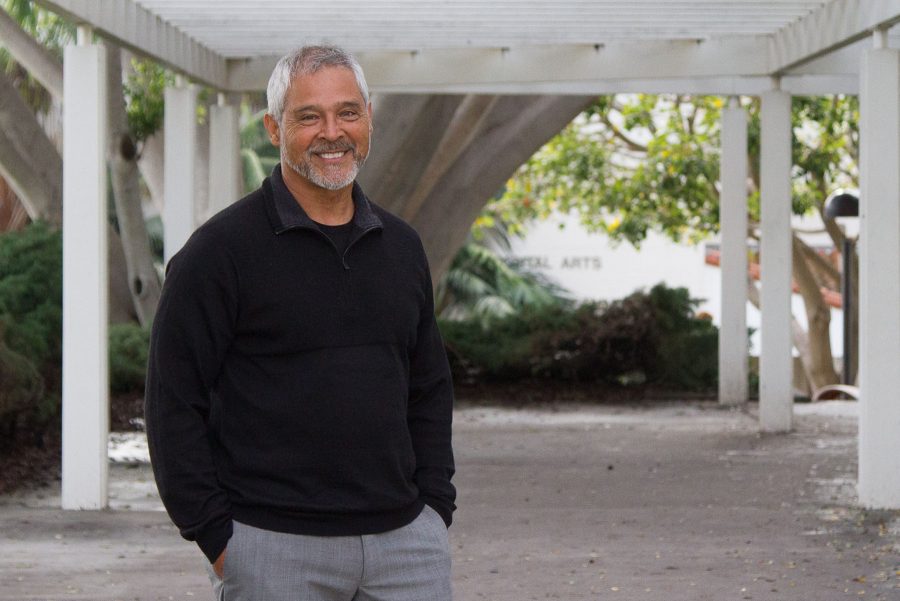 Academic Counselor Oscar Zavala on Thursday, Feb. 9, outside the Student Services building. After 29 years as an Academic Counselor to students, Zavala will be retiring through the Supplemental Early Retirement Program.

Students trickle into the Academic Counseling Center with a slew of questions for the counseling staff as the spring semester gets into gear.

Academic counselor Oscar Zavala, 62, eagerly stands up behind his window plastered in colorful campus fliers to greet the students with a bright toothy grin. He takes his time to answer all of the students’ questions to make sure they are completely satisfied when leaving.

Guiding students in the right direction comes naturally to Zavala as he has worked as a counselor for nearly three decades. Now after 29 years of service at City College, Zavala is retiring as part of the Supplemental Early Retirement Program.

“Doing something big like this and having these opportunities; that’s just what I so appreciate about this college,” Zavala said.

The youngest of four children raised by a single mother, Zavala was the first to attend college. He graduated from UCSB with a bachelor’s in sociology.

At UCSB, Zavala said he worked with a friend who started one of the first transfer centers in the state to bring in diverse students from all over to the college.

Zavala said he developed his passion for students and community colleges here and eventually decided to permanently stay in Santa Barbara to be close to his wife and his job.

Zavala joined City College 29 years ago as an intern with the counseling department where he simultaneously worked to get his master’s degree at Cal State Northridge and was part of the two percent of Latinos in the country to receive their master’s. He was immediately hired after he received his degree.

Zavala started as the English as a second language counselor and then the transfer center director. He embraced being one of the younger staff members at the time and could see the rise of technology that would take over.

“One of my strengths is I’ve always embraced technology and I take a lot of pride in that because I feel that I was one of the moving forces back then,” said Zavala.

Zavala persuaded the dean to get on board, saying he could really see the direction technology was going in and fully accepted the advantages of having technological systems be an asset for the school.

He took over the international student program for three years while working with individual students as well. During his time as director, Zavala said he doubled the program’s number of students. He later hired a full time director for the program.

“That’s the framework. I go in there and I do this stuff to build it and then make it adjust so that it can continue to sustain itself,” he said.

Zavala helped establish the Express to Success program in 2011. For five years, he worked to develop the student services portion to expand the program so he could pass it on to a full time director. He said how proud he was that the program brought so many funds and more importantly—diversity.

He had the experience and status to really pull it off and was driven to keep that momentum going.

One of his more recent programs he helped create and implement plans for was the Equity Committee where he helped allocate over $1.6 million in three years with executive presidents Jack Friedlander and Marilynn Spaventa. Zavala said he admired how committed and remarkable the two were and that they “live and breathe this institution.”

“It was one of those things quite honestly that just fell in my lap,” Zavala said.

His latest program was Student Success and Support Program where he helped students prepare early for college while bringing in funding for the school. This is what drove counselors to really pull through the obstacles and improve every student’s college experience.

Zavala said he and his colleagues faced obstacles when they challenged the school if they derived something wasn’t “fair or equitable” towards the students.

“It was always fun to be a part of that group of people that go out and make those changes,” he said.

He served on the Academic Senate for three years and the department chair of counseling four times where Zavala said he was delighted to shed his influence on others while also serving as the voice for underrepresented students and non-instructional staff.

“I have just met him this year and he’s a such a nice guy that I relate to a lot,” William Gama, 18, said. “He really gets things into perspective for me.”

Gama said he got in touch with Zavala through his father, who is a mutual friend of Zavala’s, and Gama met with Zavala whenever he needed to for any advice he sought.

Zavala hired and trained many counselors that he said he was proud to be a part of helping students utilize their skills to the maximum and said that he felt that he “contributed a lot to the changes in our department.”

“I’m hoping that the department will hire me just a few hours a week to work at whatever capacity with students,” said Zavala.

Zavala said he is bittersweet about his last semester at City College but hopes to stay in touch with the school and students even for a few hours weekly next year.

His plans for retirement include attending his fourth Semester at Sea program with his wife and two daughters. He said he believes it’s the “perfect transition” for him and his family. Zavala is a big traveler and is excited for this next trip. He said he also enjoys surfing during the summer and being outdoors.

Meanwhile Zavala is waiting for the results from the Stanback-Stroud Diversity Award that he was nominated for by his colleagues that he can hopefully add to his list with the Faculty Excellence Award from 2009.

“I have influenced the careers of a lot of people and helped their careers along because I knew they were the best people and would serve the students best,” said Zavala. “That’s what I think my legacy is.”