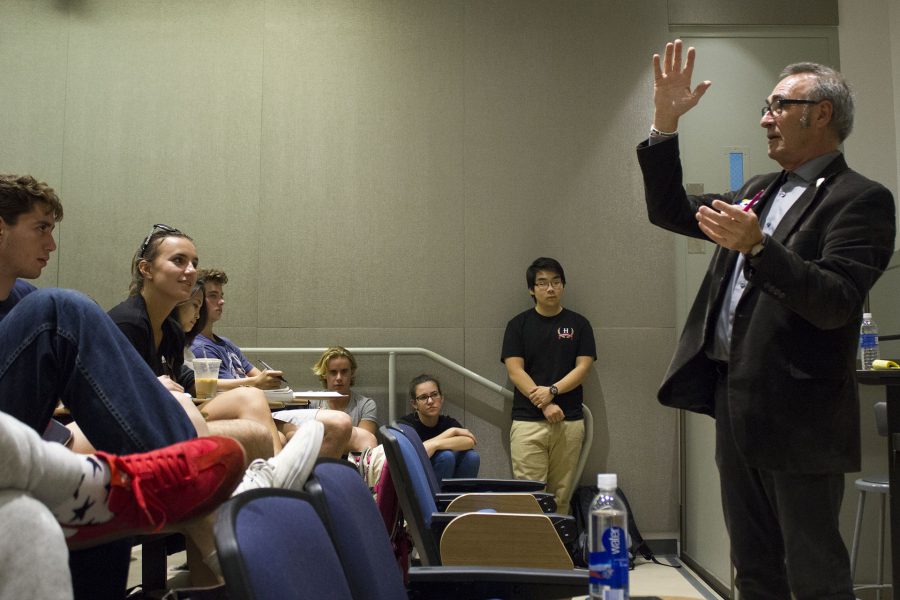 Philosophy Professor Joe White debates Environmental Science Professor Adam Green on morality during the annual Prof-Off on April 14. White will be retiring at the end of this semester.

“It seems like the right time,” he said commenting on his retirement.

He is one of the 25 faculty members who will be retiring at the end of the academic school year.

White has been working at City College for around 32 years. He started as a part-time faculty member, but in 1991 he was hired full-time as a chair of philosophy department.

“Joe White is without a doubt the most impeccable professor I have had during my time at SBCC,” said James Becker, a former student of White. “His devotion to knowledge and the interest he takes in his students really makes for a terrific classroom experience.”

“Joe White and his teachings have left a significant mark on me. I’m beyond grateful for that,” he continued, saying White was the reason he chose philosophy as his major.

White is known for being substantially involved on campus. He served on many hiring and evaluation committees, hosted study abroad programs, and taught an array of classes, most of which are no longer offered at the college.

He also used to be a chair of social science division, which no longer exists.

White was an executive director of  Center for Philosophical Education from 1997-2005, which used to organize many conferences with speakers from all over the world.

He started “STOA” in 1998, the only international undergraduate journal of philosophy.

Many top-rated universities, including Oxford, Stanford and Harvard participated in the program. The last issue was released in 2009.

In 2011, White started 2020 A Year Without War, an international non-profit organization. The organization was established at City College with a mission to make the year of 2020 a year of global ceasefire. This semester the organization moved to the new office on State Street. White will continue to be the executive director of the organization as it grows and develops.

“We are taking the next step,” he said. “Right now we are hiring stable staff for our main office on State Street, and hoping to add another office by this Spring.”

“Professor White has always been incredibly supportive of students who volunteered to work for AYWW. I am going to take his Philosophy class next semester due to my experience of working with him,” said Yulia Abdulmanova, student and a secretary for the organization.

White summed up his years at City College with a quote from Beethoven’s Symphony No. 9, “Allegro ma non troppo, un poco maestoso; I tried to move fast, but not too fast, but the burden of philosophy is to bring a little majesty.”