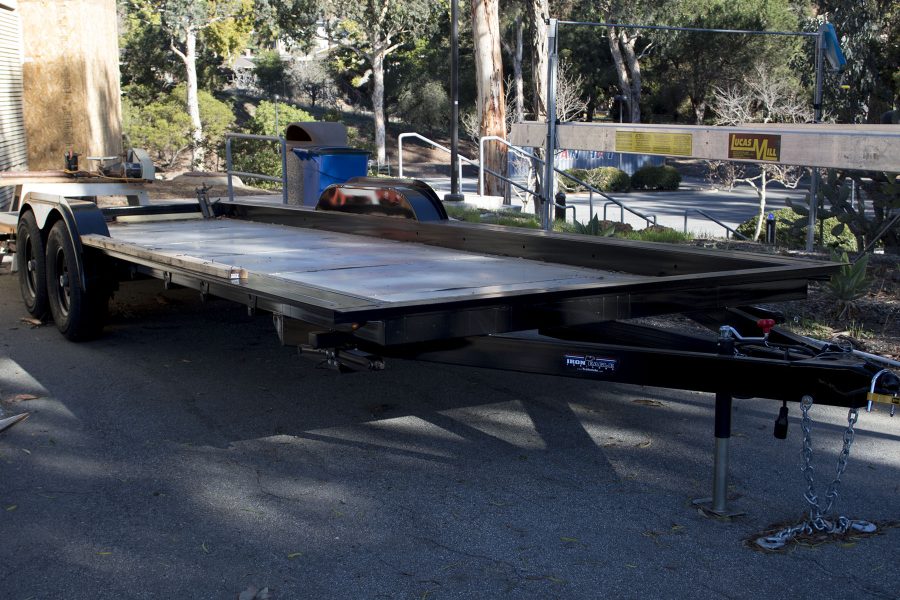 The trailer framework is the first step in the City College construction academy tiny house project, Thursday, Nov. 17, at the City College Wake Campus. The academy is using their recently awarded grant money to build an entire mobile tiny home with shrunk down features and multi-purpose appliances.

Little homes on wheels, filled with foldable dinner tables, staircases that double as dressers, and beds that pull out of the wall are the latest trends popping up all over the world.

The City College Construction Academy recently bought a trailer to completely design and create its own tiny house, hopping onto the trendy bandwagon.

The 24-by-8-foot trailer will be used to create a 192 square foot home, which is about the size of a small motor home.

“We’re right at the beginning of this kind of housing revolution—and this is one phase of it,” said Patrick Foster, head of the academy.

Tiny houses can be anywhere from 100 to 400 square feet and are mobile, allowing the owner to move anywhere they please. Many people are downsizing for environmental and financial reasons, or even just for more freedom.

“People are improving their quality of life because they aren’t spending every single day trying to pay for this giant house,” said Alicia Hahn, a student of Foster’s who is working on ideas for the house.

The academy was awarded $25,000 as a grant from the Perkins Act, which is a federal grant specifically for career technical education. The money will be used for all of the supplies, with the students doing the labor. Eventually the academy will sell the finished product to someone looking to live the tiny life.

“It helps a lot of people downsize and be more sustainable in their lifestyle,” said Hahn.

Although the project is still in the early stages, students and instructors have been working together to come up with some concrete ideas. One thing that’s been decided is to include a $1,000 composting toilet.

Foster is a green specialist, and wants to ensure all aspects of the tiny house are as environmentally friendly as possible. He’s emphasizing solar panels as a source of energy, with an optional hook up for other electricity.

Once the framing is done students can move on to the design aspect which Foster anticipates will be the hardest part. They want to make something somewhat neutral that will appeal to a large range of people, although that’s easier said than done. Tiny homes are highly customizable, and can be anything between a nautical style tiny home to “The Hobbit House,” which was completely modeled after “The Lord of the Rings” movie.

“People just want something they can make their own. These are perfect for that,” said Foster.

Another reason the houses have become so popular is because of financial instability. Buying a full sized home may not be an option for some people, but a tiny house is.

“There’s just a lot of issues out there that need resolving,” Foster said. “It’s a medium solution—a really poor person couldn’t afford this, but a medium income person could.”

He hopes to have the house completely finished by summer or fall of 2017.  Foster doesn’t think this will be the last project of this kind for the academy, but that the tiny house trend will only grow bigger and bigger.