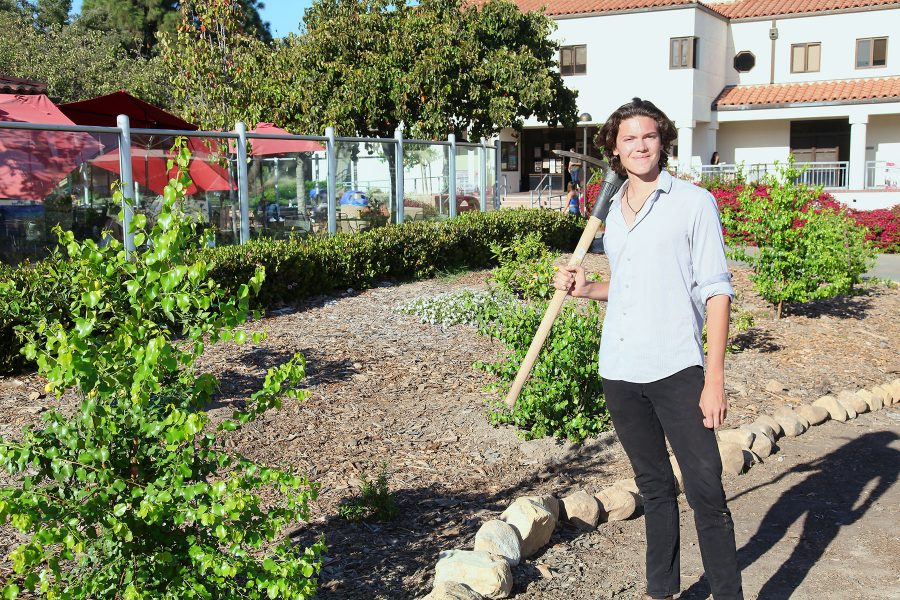 Jackson Hayes, student sustainability coalition president, stands in front of a new garden on Tuesday, Nov. 15, outside the City College West Campus Cafeteria. The gardens are made to make a more sustainable campus.

Freshly planted fruit trees on West Campus’ new garden not only provide organically, sustainably grown food for students, but flowers for pollinators and a home for critters.

“Once we started this project I started seeing tons of lizards here, lots of bees and monarchs,” said Jackson Hayes, president of the Student Sustainability Coalition, a club focused on protecting the environment.

“I saw hummingbirds, and there’s been a ton of crickets,” he said.

The garden is one of the many projects the Student Sustainability Coalition has been able to accomplish at the college since forming 13 years ago. The club recently received the statewide Green Colleges Leadership Award in the category of “Student Engagement,” during the Community Colleges Summit awards ceremony in Pasadena.

“I took this as the result of all of the years of student activity,” said Adam Green, club adviser and associate professor of the biological sciences. “This club has always been about getting projects done.”

The club started back in 2003, and Green took over after being hired in 2004. Since then, students have worked on a variety of projects using the City College as a workshop. One of the first projects was a six-week series featuring a new speaker every week, and the most current project is the permaculture garden that can be seen on West Campus by the snack bar.

“This is what you would see in nature,” Hayes said. “You would see a bunch of plants that work well together, all sort of in this symbiotic relationship.”

The base for the garden is corn, beans and squash, which create a harmonious balance for each other. The corn grows tall, taking in nitrogen. The beans grow up the corn, giving nitrogen. The squash has prickly leaves, keeping animals from crawling in and eating the food. Everything down to the sunflowers originally planted to break up the soil, has been recycled and chopped up to decompose.

Green has been throwing around a variety of ideas on how to use the crops. He’d like to have volunteers help in the garden and be able to take fruits and vegetables home with them. Another option is to provide fresh food for the JSB Café. They are using a trial and error method to see what will grow best, but have plans to expand in more areas on campus.

“They could come back in ten years, twenty years and see that garden still there. And they made that happen,” Green said.

The idea for the garden started in Environmental Studies 200, “Projects and Sustainability,” taught by Green. In the class, students pick, design and implement a project on campus.

“It took years,” Green said. “When I first showed up, I said ‘I think we should remove some lawn over there and put something better in its place,’ and I was told, ‘Not in your lifetime.’”

Green and the club continue to push for more sustainable options on campus. They have supported installing solar panels, bike racks and art displays showing the impacts of plastic. They have also worked to improve composting. Another current project is Drastic Plastic, which will collect plastic from trash cans all over campus to make a display to raise awareness on the correct way to recycle. An educational video is also in the works and will show students how to live sustainably while on their own.

The next event that will take place is a work day where anyone can volunteer from 10 a.m. to 2 p.m. on Dec. 2 in the permaculture garden.

“These are the skills they aren’t getting in other classes,” said Green. “As an instructor, it became very clear very quickly that this was a really valuable experience for students and that’s been a lot of my motivation behind it.”