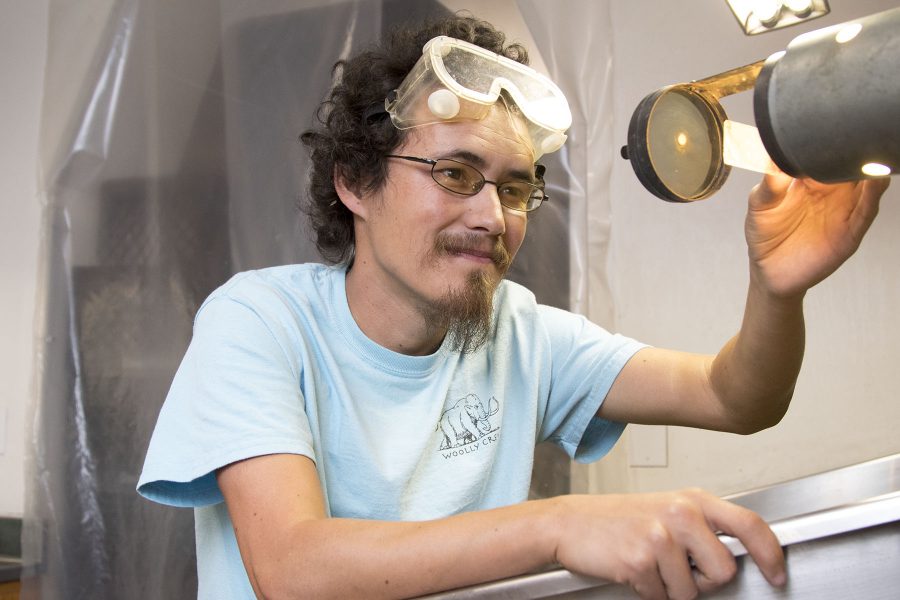 Aquivo Lowen-Diaz, geology and other sciences tutor, holds a thin slate of rock up to a polarized light to reveal the colors associated with the rock minerals on Wednesday, Nov. 9, in the rock shop at City College. Lowen-Diaz is a former City College geology student and is now a tutor and teacher’s assistant for the department.

“You never know what the rock will look like until the thin-section is done.”

Part-time employee and former City College geology student Aquivo Lowen-Diaz slaps a thin-section, a rock slice fitted into epoxy, back onto the pottery wheel to grind.

Big machines with saws that can cut bits of boulders, and grinders that can thin stones to less than the width of a human hair fill the room. The smells of paint and chemicals make their way through City College’s rock-cutting shop, which is supervised by Lowen-Diaz, set up for geology students.

He said he appreciates the few moments when he’s in the rock shop by himself. He’s made coasters with painted volcanos that he’s gifted to some faculty, and a rock slice that when held up to the light, shows a “Woolly in a snowstorm.”

Lowen-Diaz used to study music as a classical pianist. A car accident in 2007 left his right hand shattered in more than thirty places, and his ribs, skull, and jaw were injured on his right side.

In the next three years after his accident, he underwent 10 surgeries and physical therapy. He was forced to leave Kansas University and enrolled at City College in 2010.

Thirty-year-old Lowen-Diaz immediately became a rock within the geology department, taking almost every course offered and then working, tutoring and volunteering.

“He’s a good example about what our whole department is about—of our culture,” said Geology Professor Jeff Meyer. “He’s gotten things from the department and he’s giving back.”

Lowen-Diaz attributes Meyer for getting him into geology. Because of the retirement of a teacher, and the later sabbatical of another, Meyer managed to have Lowen-Diaz for a year-and-a-half straight.

“He was just quiet,” said Meyer. “It’s funny, because you would see students come more and more to him.”

Lowen-Diaz learned quickly in difficult courses like mineralogy, and when he did, he wasn’t hesitant to help others, Meyers said. He has been tutoring for almost all the geology courses since 2013, and has been in the rock shop since 2014.

All along the way, he has helped maintain and organize lab equipment, fossils and the rock collection, while also volunteering at numerous departmental events and field courses whenever he can.

“He just supports the whole department,” said Kevin McNichol, lab and field technician who’s been working with Lowen-Diaz for two years. “He’s willing to pitch in wherever he’s needed.”

Lowen-Diaz has received numerous awards for his work. The most recent is a $1,500 Minority Student Scholarship from the Geological Society of America. He has also received the departmental Spirit of Geology Award that’s only been given out a half-dozen times in the past fifty years, said Eiko Kitao, lab and field technician.

“[The award is] above and beyond academic merit and need based,” said Kitao. “It’s beyond just being smart and intelligent. It’s seeing something you love and putting your love and passion behind it.”

Although Lowen-Diaz excels at school, normal brain regeneration is hindered because of scar tissue, causing intermittent memory loss. If health permits, he hopes to transfer to Northern Arizona University for geology.

Lowen-Diaz still plays piano, but on an electric. It’s easier on his fingers, compared to the heavier keys of his grand piano. His favorite composer is Chopin.

“A part of me will always miss music,” he said. “But I’m happy with geology.”