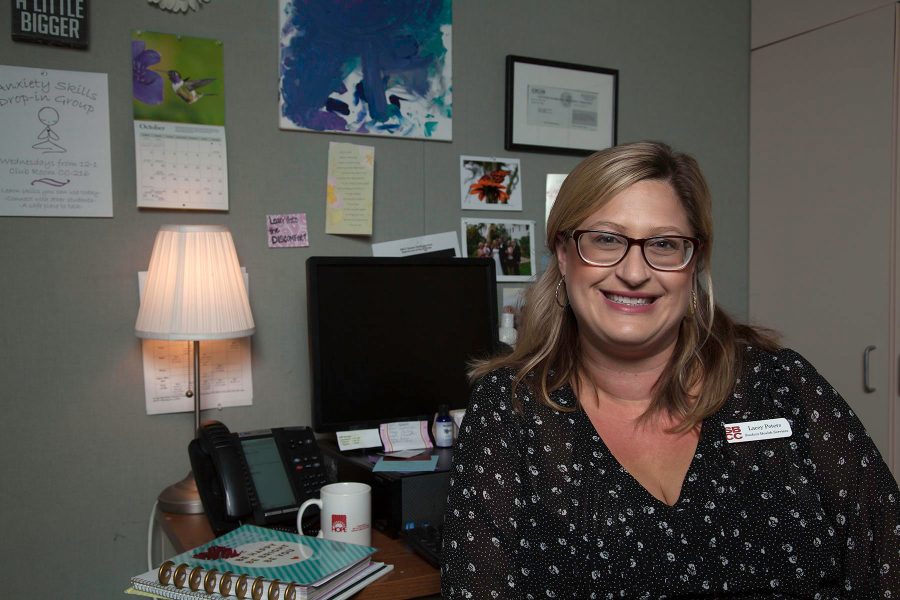 Mental Health Counselor Lacey Peters sits at her desk on Monday, Oct. 3, in the Student Health Center at City College. Peterson was hired this semester as the second full-time mental health counselor at the college.

After several years of having only one mental health counselor available to over 30,000 students, City College’s Health Services Department has a new addition.

Lacey Peters, 36, was recently hired as the second full-time mental health counselor. Peters is a personal counselor with the Student Health and Wellness services, as well as a licensed marriage and family therapist.

When she is not at home or spending time with her daughters, she is in her office from 8 a.m. to 4 p.m. counseling students.

Framed quotes and butterfly paintings cover the walls in her quiet office, which is accented by amethyst crystals placed on tables.

Peters attended Northern Arizona University in Flagstaff, Arizona, where she majored in health promotion with an emphasis in community health education. She originally wanted to be a health educator and worked in the health center at the college. As a 20-year-old student she hosted lectures on sexual education and worked with Planned Parenthood.

After graduating she migrated to Colorado and later made her way to San Diego, where she called home for some time.

Shortly after visiting a friend in Carpinteria, Peters knew she wanted to live in Santa Barbara. She got her masters in clinical psychology from Antioch University, and worked with several organizations through Cottage Hospital, Academy of Healing Arts and Casa Serena, a women’s recovery home.

Peters said she already feels welcomed by the students and faculty.

“Lacey is already a powerful member of the team,” said Laura Fariss, director of Student Health Services. “Lacey’s enthusiasm for the work she does is what stood out the most about her. She is positive and eager for the day.”

Peters spent nine years working at UC Santa Barbara in the drug and alcohol program before taking the position at City College.

“It has always been a dream of mine to work at the City College,” Peters said. “I enjoy working with the collegiate population because it is such a passionate time for people.”

Her goal at the college is to create a safe place, where students can have more access to health services and feel encouraged to talk about their mental health.

Whether it’s just listening for an hour, or being a support figure throughout their entire time at City College, Peters hopes to help students go through this period of their lives because of the challenges in school.

“Why I chose to work with students in college is because there is a lot of mental health issues that can arise throughout the age of 18-24, since it’s a vulnerable age,” Peters said, noting that students often experience their first mental breaks during college, and are often diagnosed with anxiety or depression.

“I’m really passionate about helping people become the best version of themselves,” Peters said. “Sometimes it just takes one person to care about you, and I’m glad I’m here to be that person for some people.”

Peters said since coming to City College she sees up to 25 students per week in her office.

She recently started a new group on campus, which aims to help students with anxiety. Peters plans to create more groups throughout the semester through collaboration with the greater Santa Barbara mental health community.

She also sits on the college’s Behavioral Intervention Team with other health services faculty, which allows students and staff to fill out a student concern form online if they are concerned about another student. The team receives the notifications and addresses them by showing support to the student of concern.

Peters said she intends to become a link within the community and become closely connected with Cottage Hospital and UC Santa Barbara.

“I don’t want students to be just successful academically, but also mentally, spiritually, and emotionally,” Peters said. “I also hope to positively impact their identity.”