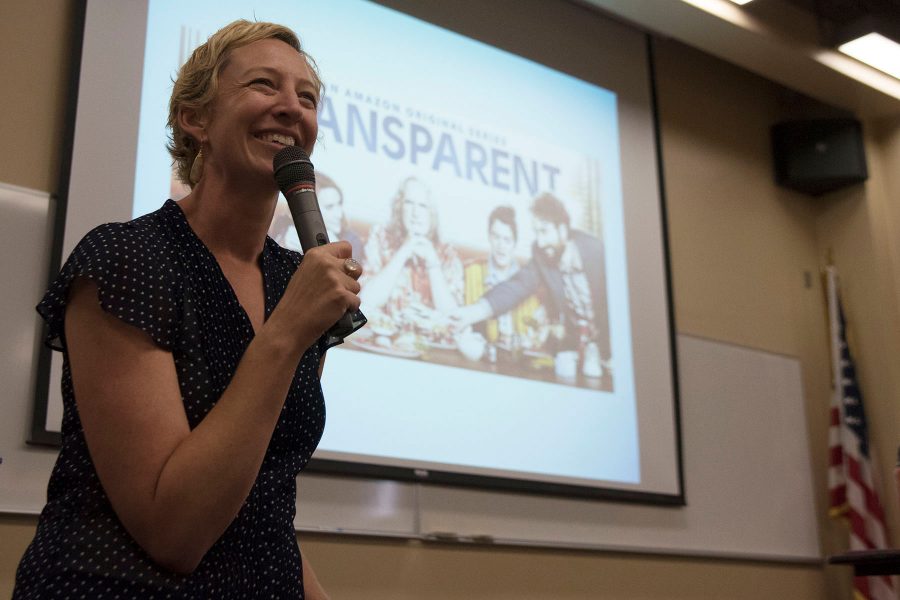 Rachel Gloger, executive director of the Santa Barbara Transgender Advocacy Network, speaks to City College students and employees about transgender issues and concerns on Friday, Oct. 7, in the MacDougall Administration Building. Gloger was on campus to explain the differences in assigned sex, gender identity and sexual orientation as well as how to address transgender individuals.

Nearly 100 City College employees and students gathered on Friday for a workshop on gender identity and expression in education in the Administration Building Room 211.

Rachel Gloger, 38, who is the executive director of the Santa Barbara Transgender Advocacy Network, hosted an hour and a half workshop on the topic of transgender males and females. Gloger’s workshop was aimed to help people learn the proper ways of communicating with, and respecting transgender people, especially those who are in “transition.”

“As we approach being allies, it is important not to be offensive when trying to be inclusive,” said Gloger, the mother of an 8-year-old transgender daughter who also gives speeches on the matter. “The idea that we’re going to support people at a young age is new, but the idea of being transgender is as old as human history.”

Gloger was invited back to the college to speak as a follow-up to a workshop held earlier at the college called, “How to be an Ally for Transgender and Gender Queer People.” The workshop was aimed at employees, however everyone was invited.

Transgender men and women identify with a different gender than their sex assigned at birth, according to the network’s website.  The site also explains the difference between assigned sex, gender identity, gender expression, and sexual orientation, and says that gender identity is normally recognized between ages 3-5.

Gloger touched on student safety in vulnerable settings such as bathrooms and locker rooms, where a majority of bullying and other issues arise. Her presentation showed a sketch of two bathroom doors showcasing the dilemmas: if a transboy goes into the girl’s restroom, his assigned sex, he has the fear of getting yelled at. If a transgirl goes into the boy’s restroom, her assigned sex, she will have the fear of getting beat up.

Transgender children and even adults who do not feel comfortable enough to use a public bathroom can, and have, developed health issues, Gloger said. Due to the circumstances, they simply would not go to the bathroom at all, which can cause issues like dehydration.

Gloger described aspects that are often missed, or simply ignored because of the fear people possess when it comes to something as sensitive as gender transition. She also spoke about the proper use of pronouns when speaking to a person who is transgender.

A transman is born female, but identifies as a man so the proper pronouns are he, him and his when speaking to, or about him. The same goes for a transwoman, who is born male, but would identifies with she, her and hers.

“It’s wonderful to obtain the information to be more inclusive in our transgender community,” said  Cynthia Munoz, extended opportunities program and services technician who attended the workshop.

Toward the end of the workshop, Gloger recognized City College and the Santa Barbara Unified School District, complimenting them for their positive involvement in the transgender community, but said that medical Santa Barbara is not as progressive.

“There’s still a lot of transphobia in Santa Barbara’s medical department,” Gloger said. “Our schools are actually much more progressive than our health care.”

The network trained over thirty organizations in Santa Barbara. Gloger commends the communities getting involved, and keeping an open mind with transgender education and training.

“There is some work that has been done,” said Loren Mindell, City College library technician who also attended the Gloger’s workshop. “But much more that could be done.”