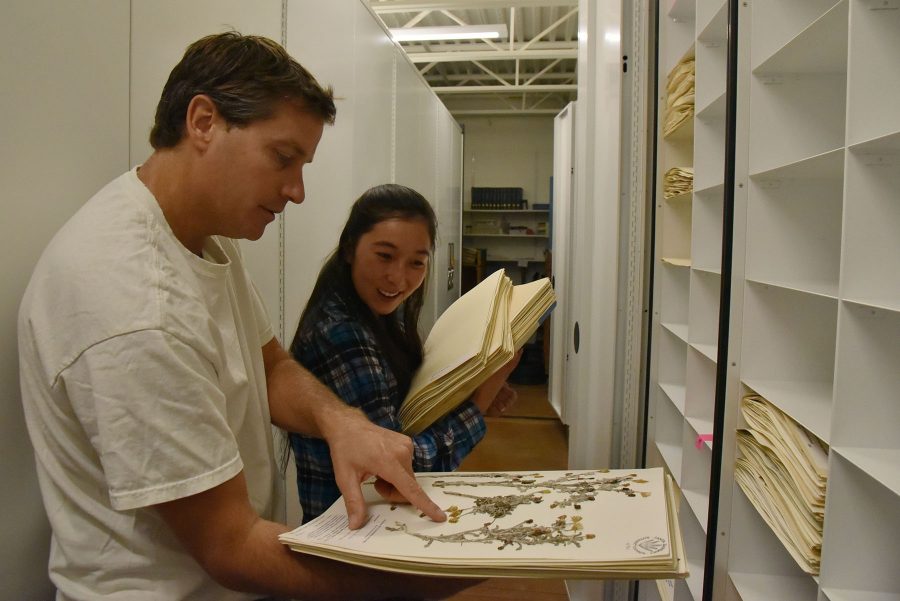 A student pulls out one of the many manila folders stacked inside wood crates that fill the underground lab as other City College volunteers begin their work.

With over 100 thousand individual specimens to move, the Santa Barbara Botanical Gardens was glad for the help. The gardens needed their entire herbarium collection moved into the new Pritzlaff Conservation Center.

“SBCC students were critical,” said Matthew Guilliams, the herbarium curator. Without that kind of volunteer aid, “we wouldn’t be able to do what we needed to do.”

In just six days, volunteers from City College’s Biology Club and others helped move the gardens’ entire herbarium collection into the center. This is the first of many community outreach activities the club plans for the coming semester.

Downstairs there is a storage area where students help file the folders away.

“I’ve never been in a storage lab like that before,” said Kara Kang, a botany student who helped organize and store piles of folders. “It’s just crazy how many plants were there.”

The herbarium has some of the best examples of specimens from North America, the Channel Islands, and central coast, along with the largest lichen collection in North America. Its entire database is online and they have plans to photograph the entire collection.

For Marjorie Mitchell, who likes to go by Jorie, the biology club president, the gardens have been a source of education. Field trips and volunteer projects like Frog Watch have created a sustained connection to City College already. In fact, Guilliams has had a few City College interns.

Mitchell and the co-president, Madison Gibney, want to create lines to the community beyond pure academic needs or resources.

She views the herbarium event as the first step to creating stronger ties with the community.

The club’s calendar is filled with events for this coming semester. They are planning a tide pool beach walk this weekend, and later on hosting a keynote speaker from the Oiled Wildlife Care Network, and have plans for a science night at the Chicano community center Casa de la Raza.

“We’re not half-hearted,” said Gibney. “We’re doing as much as we can do.”

The club acts as its own community, accepting any and all students with any amount of interest in the biological world. It helped Mitchell adjust to Santa Barbara after moving in from out of state.

Mitchell describes the club as an “outlet to make dreams of mine come true.”

The club’s diversity is also prompting the presidents to try and start events that student interested in biomedical science, zoology, and botany can all enjoy and delve into. You don’t need to be a biology major to join the club, Mitchell said.

“We’re doing things that are for everybody.”

Correction: Sept. 26, 2016
This story includes grammatical or spelling corrections to a previous version.