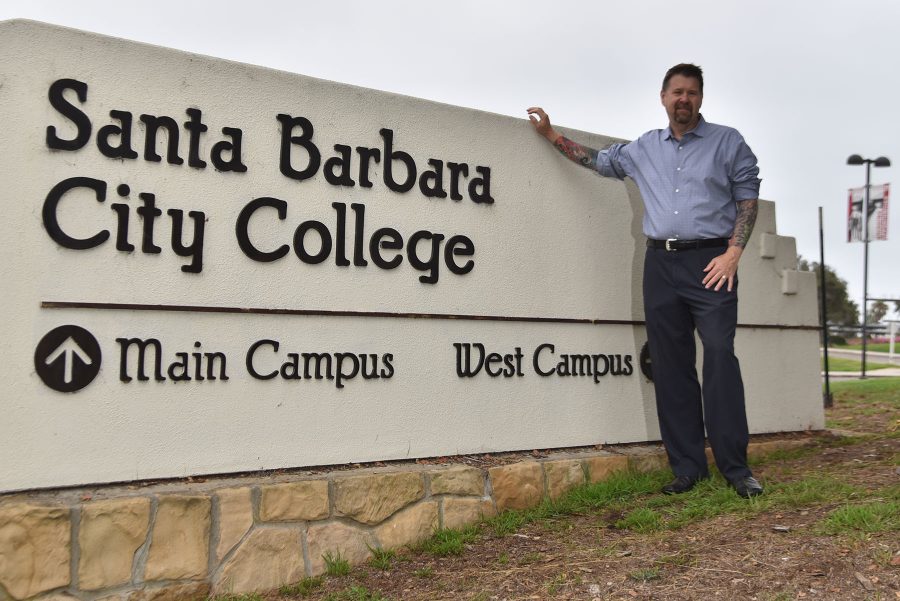 Dr. Paul Jarrell enters with a warm smile as jokes and the smell of fresh coffee tuck the meeting room in coziness. Faculty find their seats and shuffle papers for the College Planning Council.

“I’m motivated to provide the same opportunity to success for everybody,” he said. “That’s what drove me to Santa Barbara City College.”

Jarrell, the new executive vice president of educational programs at City College, has been on the job for the past two months, overlooking faculty and counselors with tentative plans of his own. He brings his positive outlook, empathy for disadvantaged students, and humor to the table.

“He’s a Big Lebowski fan,” said Phyllis Johnson, an administrative assistant to the vice president. “That’s what all the bobble-heads in his office are for.”

Jarrell, in addition to his bobble-heads, hides an array of colorful tattoos under pressed shirts and suits. His left arm has a dragon and koi fish melding into each other among lotus flowers, representing transformation. His right arm is adorned by a phoenix.

“I like the symbolism of opportunity and second chances,” he said. “And they make me a badass.”

Jarrell’s humor reaches back to the foothills of the Appalachian Mountains in southern Ohio, to the one-street town he called home. He left there to attend college, and was the first in his family to do so.

Moving to Pasadena, he began working for over 20 years, first as a professor at Pasadena City College and later as a dean. Both his daughter and son are in graduate studies, while his wife works as a hospice nurse.

“He’s very moved by the power of education,” said Priscilla Butler, president of the Academic Senate.

She described a memorable meeting when Jarrell was speaking about a previously incarcerated student at City College who kept repeating, “I feel like I don’t belong here.”

“And when Paul was talking about it,” she continued. “Jarrell said ‘He belongs here more than any of us do.’”

One of Jarrell’s main goals is to connect programs likes iPath and Express to Success, and many more. He offered pizza to faculty as an incentive to work on the difficult goal.

Despite stacking issues of decreased enrollment, reduced revenue, and a retirement program, Jarrell has maintained a noticeably optimistic outlook. City College issues “allow us to pause, reflect, and project moving forward,” said Jarrell. He said it always allows them to ask, “Can we be better?”

Jarrell returns to his office throughout the day and makes sure to keep the blinds on his windows up as he sends out emails or makes phone calls. He glances out as students, faculty and groundskeepers stroll by.

“Every student belongs here equally,” Jarrell said. “Maybe I had a long day because of lots of meetings, but when I get home and look back at the difference—God, that’s a great job; the best job on the planet.”