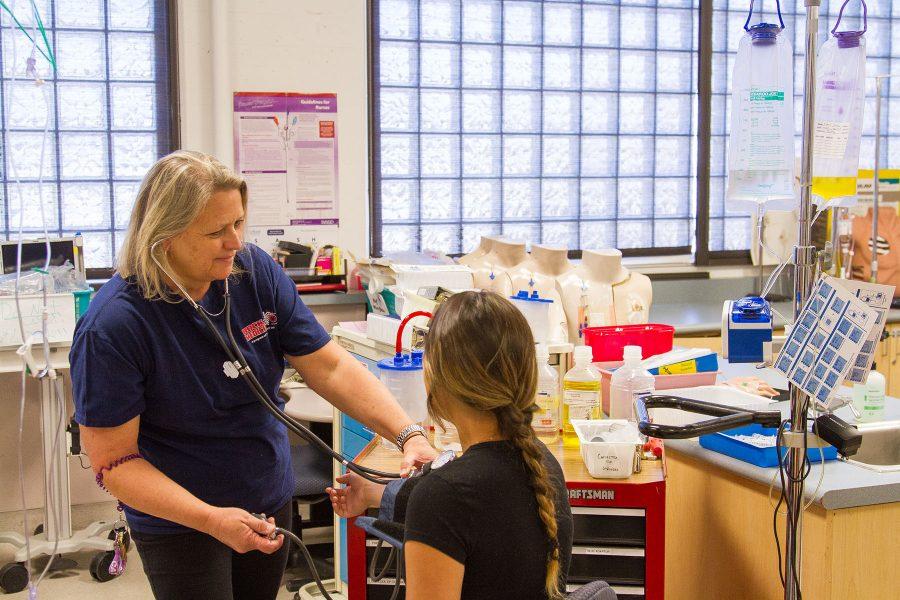 Cathy Schermer, nursing instructor at City College, demonstrates the proper technique for checking a patient’s blood pressure in the nursing school lab on Thursday, April 28, at City College. Schermer is a volunteer nurse for Rock Medical, which supplies non-judgmental medicine for events like Burning Man in the California desert and Lucidity at Live Oak campground off of San Marcos Pass in the Santa Ynez Valley.

Among an oak-tree grove decorated with colorful art pieces and filled with dust-covered people sits a tent with a hand-painted sign reading “Medical Center.”

“I wanted to expose the students to a different type of nursing,” said Schermer.

As part of their community health course, Schermer gives her fourth semester students the opportunity to volunteer at the festival, an annual three-day gathering which attracts families and people of all ages and is centered around music, dance, art and community building.

Over the semester, the students in the course are expected to complete 54 hours of credit doing medical work of their choice out in the community. Each year a handful of the students choose to invest their time at Lucidity.

“They really like it,” Schermer said. “The students who came with me this year were waiting for a whole year to be able to have this opportunity.”

She added that first- and second-semester nursing students approach her to ask about working the festival in the future.

Schermer has been attending the festival as a medical volunteer since it started, five years ago. She also volunteers at different festivals around the west coast through an organization called Rock Medicine, or Rock Med for short.

Rock Med is a nonprofit that provides free medical care at events such as festivals, concerts and sports games. The organization runs on equipment donations and volunteers, who must have basic medical training and certification.

Since Lucidity festival takes place far from any hospital or urgent care center, the on-site medical tent must be well stocked with supplies for a wide variety of ailments and be ready to serve those in need.

“It’s very random and you never know what’s going to come up,” Schermer said. “From something as simple as a splinter in their finger to a full on suspected heart attack.”

Schermer and the other volunteers saw both of these at Lucidity this year, as well as an accidental stab wound, a baby with pneumonia, at least a few ankle injuries from dancing and some substance overdoses.

“We did have several [patients] come in who were very intoxicated with unknown substances to the point where they were non-responsive and needed to be monitored,” said Megan Snider, one of Schermer’s fourth-semester nursing students.

Drug use is very common at these events, and is “just the culture,” according to Schermer.

As the number of festivals and festival-goers increase, there is more need for medical aid.

That’s where Schermer, Snider and other Rock Med volunteers come in.

“I wasn’t familiar with rock medicine before, but it’s something I’m going to continue to do because I really was inspired,” said Snider. “ I have several festivals I plan to work over the summer.”

Snider and Schermer both plan to volunteer with Rock Med at California Roots festival and Northern Nights.

Schermer is also planning on working at the Kate Wolf Festival, Symbiosis festival and hopes to get her Nevada nursing license so that she can work at Burning Man this year.

“I’ve sort of been a bit of a nontraditional nurse,” Schermer said. “You know, the sterile hospital environment isn’t really my cup of tea.”