SBCC graduates start cookie company out of their kitchen 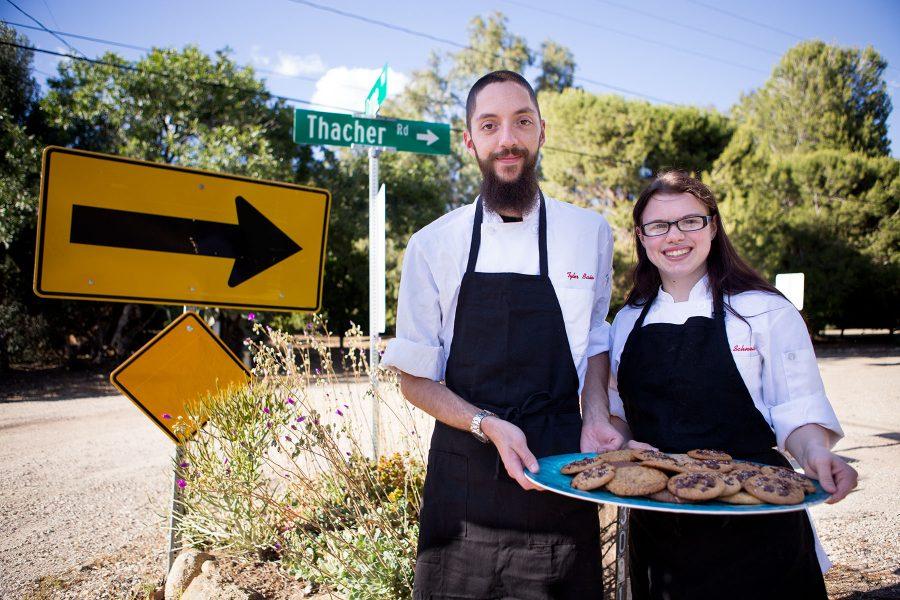 City College culinary program graduate Tyler Baio, 23, and his girlfriend and fellow graduate, Anna Schneider, 21, created the company. They founded it out of Baio’s home kitchen in Ojai, California, 14 months ago.

Their appeal is simple, Baio said. It’s all about taste.

“That’s what we hope sells our cookies all the time, the taste…” he said. “We want people to say ‘Now that’s a damn good cookie.’”

That’s been the overall reception so far. Although their company is fairly new, they are already vendors at several locations, including the Ojai Certified Farmers’ Market, several local coffee shops and City College.

Schneider said her favorite vending location is the farmer’s market because she really enjoys being able to interact with their customers. The company always provides samples and Schneider says, “It’s really fun to see people’s enjoyment of our cookies.”

Their current cookie recipes are blends of those they have created, along with some passed down from Baio’s mother, all with various tweaks to make them unique to the company.

In three or four hours they are able to crank out about 300 cookies.  They both agreed that the process is as rewarding as it is demanding.

“After everything’s said and done… seeing the cookies all stacked and packaged… you see how much we just did in three or four hours, it’s really a sense of accomplishment and it feels good,” said Baio. “You really can’t beat a home-baked cookie.”

The company’s name came from the name of the street where he grew up, which is also where all the preparation and baking is done.

Baio founded the company after he learned about the cottage food law during a sanitation lesson at City College.  He explained that it allows people to distribute home-baked items from their personal kitchens, as long as the food does not require refrigeration.

Because Baio and Schneider can work out of their residential kitchen in Ojai, they were able to start out really small and build from there, Baio said.

The inspiration for the business venture came from a staff member at the College, Baio said. Kendra Wise, a culinary program instructor, gave him the idea that sparked their entire business model, by teaching him about the cottage law.

“If it wasn’t for what Kendra said that first semester, I doubt I’d even be doing this,” he said.

Schneider and Baio have several plans to expand their company. Baio projects they will be operating out of a commercial kitchen within a year and a half, to two years.

Along with finding a different venue, Schneider said they’re hoping to switch up their recipes in the future.