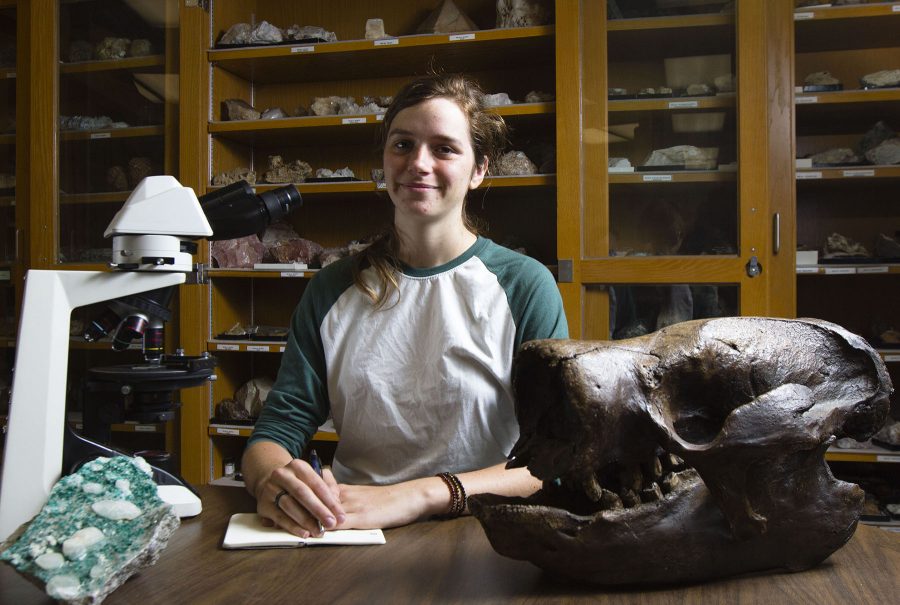 City College student, Amanda Allen, finds herself at home in the geology department on Monday, April 11, at Earth and Biological Science building at Santa Barbara City College, Santa Barbara. Allen’s favorite things in the department are the giant sloth skull and the plethora of crystals that line the walls.

Once met with discouragement, an aspiring City College student shot for the stars and now, she’s researching Mars.

Amanda Allen just completed her second internship with NASA, spending the past few months working on two separate projects in the Jet Propulsion Laboratory. She shared the work she did in the lab during a lecture last month in the Earth and Biological Sciences building.

“Looking back recently at so many key points when I was starting to go down this path,” said Allen. “I would be talking with someone about it and they would be like, ‘oh that’s not for you or you wouldn’t like that.’”

She now has an associate’s degree in geology from City College and is transferring to UCSB to earn her bachelors in earth sciences.

Allen wasn’t always such an ambitious student. She said she was not fully engaged in high school because she was frustrated from being placed in remedial classes. Although she was eligible for more demanding ones, she was not placed in them because of scheduling constraints.

“It wasn’t ever that I didn’t care about school, I just didn’t ever feel challenged,” she said.

Allen enrolled in classes at City College for the first time in 2012.

She was living in low-income housing where she had the option to go to school full time instead of paying rent, and she accepted.

She said she originally intended to take fun classes, but her sister recommended that she enroll in Jeff Meyers’ geology class. Since then, she’s been fully engaged in geology.

Last fall, Allen spent sixteen weeks working on a project for an internship at the Astrobiogeochemistry Laboratory at JPL.

The project’s aim is to amp up focus on some existing isotopic analyzing technology. Such technology is used to help discover new information about Mars by applying the science researchers have learned from Earth to other planets. NASA has plans to launch another rover to Mars sometime in the 2020’s, which will retrieve core samples, which will lead to more research.

The team Allen interned with worked to decrease the size necessary for a sample to give feedback on their tools and had success when Allen completed her internship. This summer she intends to return to the lab.

In the spring, Allen worked with leading researcher Dr. Serina Diniega to observe the active systems on Mars, mainly the geomorphology of sand dunes. Dr. Diniega said, “I found Amanda’s art background different but it was definitely useful for our research, it’s part of what attracted me when she emailed me about the program.”

Their team is using the Mars Reconnaissance Orbiter to take high resolution photos of the surface of  Mars’ to calculate the movement of sediment among other tests. This is the same way water was confirmed to be on the planet’s surface for the first time last year in September.

The team Allen was working with will be able to use this information in the short term to guide their decision when picking locations to send the new Mars rover.

Allen says she, “really enjoys teaching,” and she’s been on every geology class trip so she’d make a fitting addition to City College as a geology teacher she jokes. She’s tutored for historical and physical geology classes in addition to tutoring for each of the field study trips.

“One of my favorite things is that moment,” said Allen, “when you say something or explain it in a certain way and the students’ like ‘Oh! I get it!” She likes encouraging people she says, and finding different ways to relate to people.

She also loves making art and is “trying to get to a point where art is synonymous with whatever work [she] is doing.” Like in her last internship she was able to “advertise” her art skills as part of what would make her an asset to the dune project.

She’s currently experimenting with making her own paints by crushing rocks she finds and using them for their pigment which she just learned to do.

After all, she’s always learning. It’s what’s important to her, and her success. In her own words, “It’s not about the grades, that’s not my focus, it’s about whether I’m learning.”