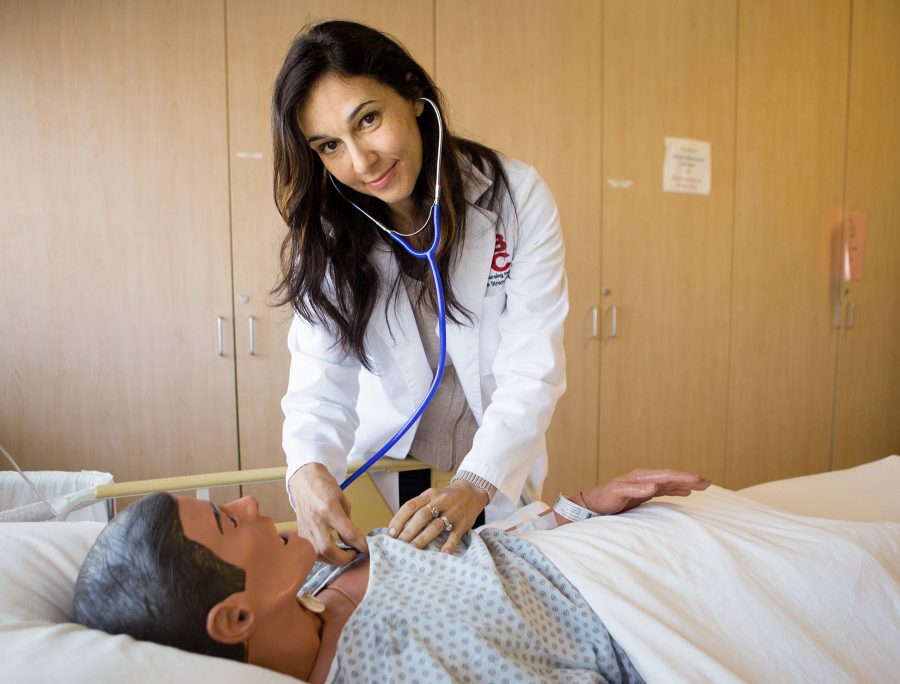 Nursing Instructor Rosette Strandberg uses a stethoscope one of the practice mannequin in the nursing lab on Tuesday morning, April 12, in the Health Technology Building room 277 at Santa Barbara City College. Strandberg also volunteers for Operation Smile, a nonprofit which offers surgical repair to children born with cleft palates.

The organization is a nonprofit dedicated to providing free medical surgeries to children born with cleft lips or palates in poverty-stricken areas worldwide.

“In a lot of these very poor, uneducated areas that we go to, people believe that a child born with a deformity is a punishment from god,” Strandberg said. “If they have a facial deformity they get shunned in those areas.”

Educated in Australia, Strandberg came to the United States as a traveling nurse in 1992. She worked in a variety of different settings with responsibilities ranging from surgical care to pediatrics.

She came to Santa Barbara three years later and started working at the Cottage Hospital Intensive Care Unit and has been a full-time assistant professor at City College for about 15 years.

“The students are inspired. She inspires by example,” said Ann Marie Kopeikin, associate nursing professor. “They see her pictures from Operation Smile. It gives these budding nurses this idea that [they] could do this too.”

When she first heard about Operation Smile from a Cottage Hospital co-worker Strandberg applied right away. By the time she started at City College, she had already been on a few missions with the organization as a recovery room nurse.

It’s estimated that every three minutes, worldwide, a child is born with a cleft palate. In the United States, cleft palates and lips are not uncommon, though, the availability of surgery makes them unnoticeable.

Untreated, cleft lips and palates can have consequences for the child’s ability to speak and eat. When the ability to eat is compromised, it can lead to severe malnutrition and those born with an open palate are prone to infections.

Besides all of these medical reasons, the children are also up against social ramifications as well.

“They can’t work, they can’t find a life partner, they can’t get married, have a child,” Strandberg said. “So that deformity is really depriving them of a human right, I believe.”

Strandberg’s job is to help stabilize the children who have just completed surgery and closely monitor them for complications.

So far she’s been on five missions. Her first three were to Brazil, Columbia, and Siberia, which took place throughout three consecutive summers.

After taking a break to have her son, Erik, she joined a mission to Alexandria, Egypt, right before the revolution.

Her most recent trip was to Vietnam in 2014, the country was celebrating its 25th year with Operation Smile.

“You could just see how it is developing as a country,” said Strandberg about Vietnam. “It was really interesting to see the modernization of that country, but then to also see how it’s still very rural and there’s a lot of poor, underdeveloped areas.”

By bringing her experiences to the classroom, Strandberg hopes to inspire her students and show them that they can make a difference.

“There is a world outside Santa Barbara and, more importantly, a world outside the United States,” said Strandberg. “We’re part of a global community and we have to think that way. We need to think about not only us, but how [we] affect others.”

There isn’t a shortage of volunteers for Operation Smile, partly because the organization spends a lot of its time and money, which is solely from donations, training doctors local to the areas it serves to be able to perform the surgeries themselves.

Strandberg plans to do her next mission as soon as she is available.

“Now that my son is getting older I find that I have more time,” Strandberg said. “I’d like to go again next year. Wherever they ask me.”