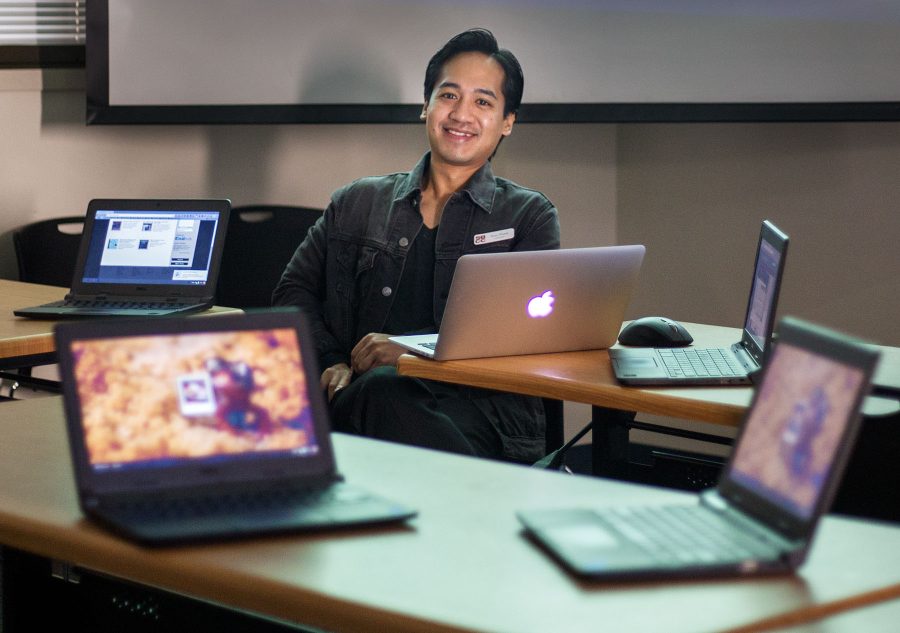 Sean Flores, systems and technology librarian, sits surrounded by some of the library’s computer resources on Friday morning, April 15, at the Luria Library in Santa Barbara. Flores maintains all of their electronic resources including the official webpage database.

In Fall 2015, the Luria Library strengthened its current roster of faculty and staff with a procession of young librarians.

Sean Flores is the newest faculty member, and was hired as the systems and technologies librarian. He is in charge of managing anything on the web such as resources, the library’s website, social media and the Luria Library’s Facebook page, and even runs research workshops for students in the library.

Flores was born in Agana, Guam, in the 1980s. He lived there with his father, mother and two older brothers until age 5.

“My dad was in the military, so that is where we happened to be when I was born,” Flores said. “It was only a coincidence.”

Flores spoke of his two brothers.

“We are all different which helps complement each other’s differences, but we do share the same sense of humor,” he said.

At age 5, Flores and his family moved to San Diego where his father was next stationed. This is where Flores was raised before attending University of California, Riverside, where he majored in business administration and worked on campus as a peer advisor.

After attending grad school at San Jose State University for two years, where he earned his master’s degree in library and information science, Flores moved back to San Diego and began his career at the San Diego Public Library.

“That was more focused on the library’s website and marketing,” Flores says. “Working here is much more intense but very rewarding. I love working with the students on a more personal basis like I do here.”

Flores said he wasn’t planning on leaving his job in San Diego to work at City College, yet since coming here, he has appreciated the work ethic of his fellow employees.

“We’re a small staff and everyone works really hard,” he said. “We need to be able to communicate and handle a large amount of responsibility, and that is just what we do.”

Flores talked about the importance of students and people working hard to better themselves, and how fortunate he is to be part of someone’s endeavors towards their future. He said he has found a new home in Santa Barbara and is enjoying working at City College.

“Like the overall mission of the school, this job had all the room for long term,” he said. “Working at City College is great, I am very fortunate to be here.”