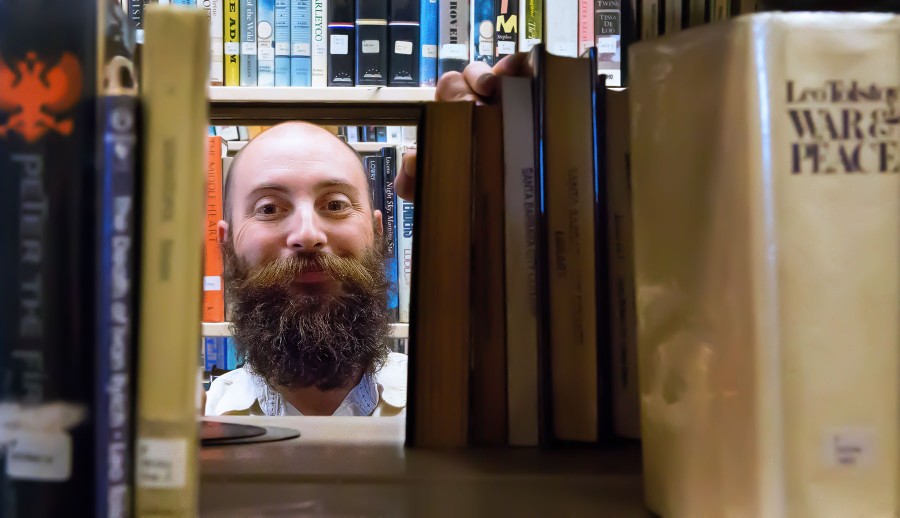 Library Assistant Loren Mindell stands with the book collection written by one of his favorite authors, Leo Tolstoy, on Thursday afternoon, April 7, at the Luria Library in Santa Barbara. Mindell is one of the newest staff members at the school’s library.

His quiet demeanor and long brown beard may have grabbed your attention while checking out a book at the front desk of the Luria Library.

Loren Mindell, 31, is the Luria Library’s newest library assistant and staff advisor for City College’s own Bernie Sanders Club. Mindell was hired eight months ago after graduating from Eastern Michigan University, where he majored in history and minored in political science.

“I just love this school. I have never seen another school with as many resources to check out books, computers and anything the students need,” said Mindell. “Plus every day I come to work I get to drink coffee, which is very exciting to me.”

Mindell was born in Provo, Utah, before his father’s career relocated the Mindells to Israel, Boston, Lubbock, Texas, Cincinnati and then Ann Arbor, Michigan from age 10 to 24. Mindell lived in Ann Arbor for the next 14 years and worked as a line cook while in college at Zingerman’s Restaurant.

“I have a great passion for food,” said Mindell. “I love to cook it and I love to eat it and that made my job easier. It helps to be around the people and places you have some sort of connection or passion with.”

Mindell also has a passion for the Russian writer Leo Tolstoy, but claims “there is nothing about me, not even my beard, that is at all like Leo Tolstoy, nothing.”

However, Mindell said that now he is most passionate about City College’s Bernie Sanders club, which he co-founded with City College student Arianna Rose.

Mindell is the staff contact for the club and handles voter registration and phone banking, “where I try not to get into arguments,” said Mindell.

“Bernie Sander is not the normal candidate. I mean, look at all of them. It’s like someone summoned Beetlejuice,” Mindell said, referring to the wild campaign and Tim Burton, his favorite film director since Pee-Wee’s Big Adventure, 1985 and Edward Scissorhands, 1990.

“The right wing has done a great job at getting people to come out to vote,” said Mindell. “The Sanders campaign depends on the young person’s vote so we want to make sure the young people get out and vote so the wrong person doesn’t get elected.”

His knowledge of politics and film is extensive and when a certain republican candidate was brought up, Mindell’s face turned to a shade of scarlet and he said, “no comment,” followed by a closed mouth grin and two quick lifts of the eyebrows.

Mindell loves his job and loves the city of Santa Barbara where he has made new friends and co-workers.

“Yeah, I’m going to be here, hopefully for awhile,” he said. “I have no plans of going anywhere.”