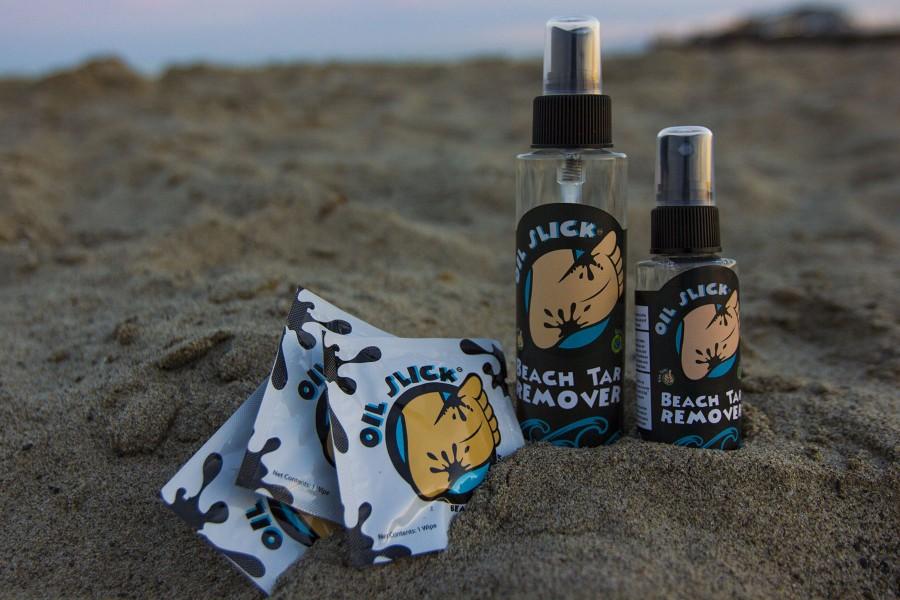 The oily Santa Barbara coastline can make it difficult for beach goers to get tar off their feet, surfboards or dogs, but help from Oil Slick eases the process of removal.

Former City College student John Harmon pitched his idea of Oil Slick last spring at the Scheinfeld Center New Venture Challenge to a panel of investors and bankers who acted as judges. Harmon was inspired to create the non toxic spray when he saw a mom cleaning off her children’s feet with gasoline at a beach.

Harmon’s father John Sr said that Harmon became passionate with this new field of study, but at first “like all entrepreneurs, he struggled in finding a product or service that people needed or wanted.”

With the help of chemistry teachers and college friends, Harmon created what became Oil Slick straight out of his kitchen. Experimenting and mixing different household ingredients eventually led him to creating an eco-friendly and citrus-scented product.

His invention won first place in the competition and he received a $5,000 scholarship to use towards starting his business. Since the competition, Harmon expanded his brand to more than 20 retailers in Santa Barbara and Ventura. One retailer is City College’s Campus Store.

Harmon is currently studying social entrepreneurship and international marketing with Semester at Sea. Harmon’s father, John Harmon Sr., gave a glimpse on Harmon’s life since winning the challenge and how it has continued to help him in achieving product placement.

Harmon has also expanded his endeavors as a philanthropist. Harmon created “Cookies for Ghana,” which bakes and sells cookies on campus to raise money for villages in Ghana, Africa. Along with Harmon’s exciting new ventures comes the difficulties of running a business as a “one man show”, his father said.

When Harmon returns he plans to pursue a business entrepreneurship degree at Antioch University and would like to create a program at the school that would help to expand Oil Slick.

This year’s registration for the 6th Annual New Venture Challenge has begun. Coordinated by Julie Samson, executive director of The Scheinfeld Center, this competition encourages students at City College, colleges from Santa Barbara County and high schoolers from the area to submit a pitch of a business plan or idea.

There are two tiers to this event, a high school and a college level competition. Ten finalists from each tier are invited to pitch their ideas at the challenge. More than $15,000 in cash or scholarship prizes will be awarded to the winning contestants.

The competition will take place at 2 p.m. on Friday, April 29 in the Scheinfeld Center.