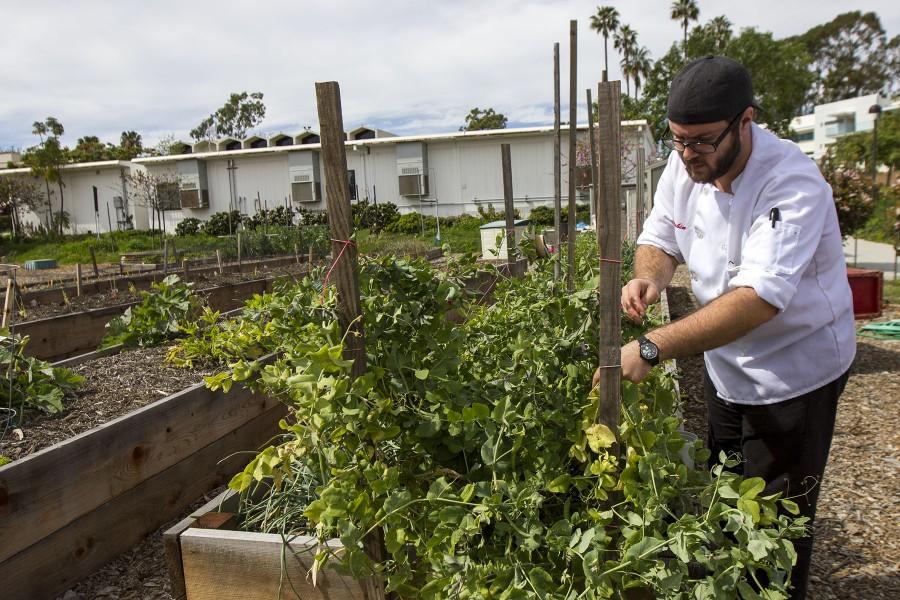 Culinary Instructor Charlie Fredericks makes cooking a fully immersive experience from the planter to the plate in his gourmet dining course at City College.

The community garden behind the portable East Campus Classrooms was created two years ago as a collaboration between the Culinary, Construction Technology and Environmental Horticulture programs. All vegetables and herbs grown in the garden are used by students in the Culinary program.

“Find the best ingredients and then half your job’s done,” Fredericks joked. “The second part is, if I get the best possible ingredients, all I gotta do is not screw it up. “That’s it. And if you grow them, you will respect them more and take better care of them.”

Currently, 25 percent of the produce is being harvested by the Culinary program for their Gourmet Dining class. By fall semester, Fredericks wants that number up to 75 percent.

He said one of the most important things for people working in the culinary industry is to be connected with the food they are cooking. He sees the garden to be worthwhile, despite it being more costly than a grocery store.

“That connection to food and where it comes from, I think, is severely lacking in America. People are way distanced from their food, it’s all supermarkets, prepackaged,” he said. “I want people to understand seasons, when food happens and the challenges of getting it to the restaurant.”

With the upcoming demolition of the Campus Center, Fredericks talked about the future of the Culinary Arts classes and the garden.

His class could potentially be taught in an outdoor wood-fire kitchen.

“We’re literally going to have a kitchen, a dining room and a garden all in one little area,” he said. “And that’s the full circle of closing the loop that I’m trying to get to. We’re close.”

Fredericks said by next year the restaurant developed by the Culinary Department will become completely sustainable. However, he hopes to one day have a surplus of produce and be able to feed needy families in the Santa Barbara community.

Culinary student Sacco Nazloomian,who was instrumental in the creation of the garden, had a view similar Fredericks’, “Part of our longitudinal vision is to also create a demonstration garden for the students and even people from the community to come and see what is possible here in Santa Barbara,” said Nazloomian.