SBCC course hits the waves instead of the books 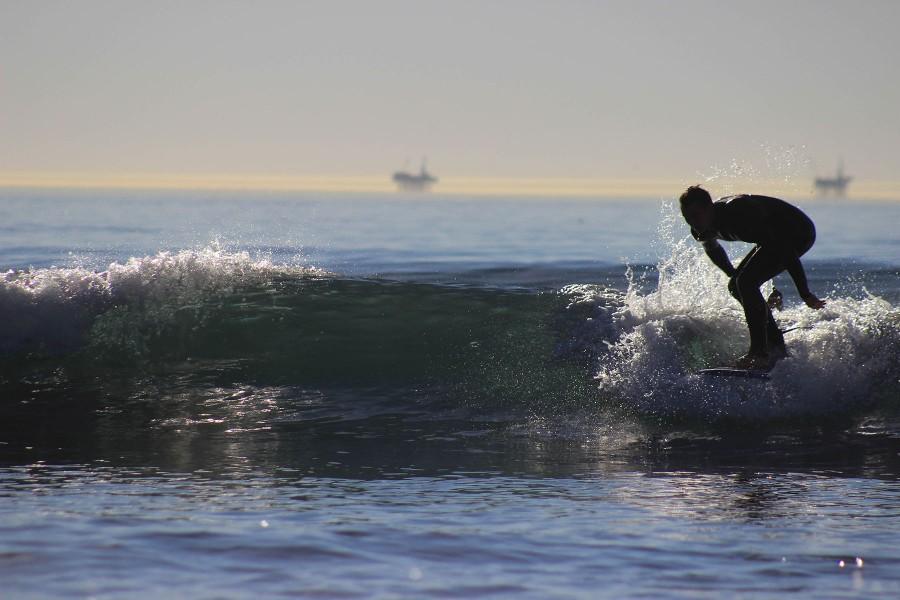 Estiban Belikan drops in on his fifth wave of the morning during his surfing class on Tuesday, Feb. 16, at Leadbetter Beach in Santa Barbara.

Most City College students are still fast asleep at 8 a.m. on a Tuesday. Some are already on campus sitting in their first class of the day, feeling groggy and unmotivated.

However, one group of eager students looks forward to their first class. Students in the Beginning Surfing course head out early to surf every Tuesday and Thursday morning. It is one of the most unique courses offered at City College because students earn 1.5 CSU and UC transferable credits for surfing.

“It’s hard to think that you’re in a class when you’re out there,” said student senator Mark Unger. “It’s way better than any of my other courses.”

The class meets at the picnic area at the North end of Leadbetter beach for updates on conditions and some quick advice from their instructor, Scott Fickerson.

“We’re dealing with a fading swell, but there are still some remnants out there,” said Fickerson. “Good news is there’s only one other person out there.”

After a short tutorial about the proper techniques for paddling out and standing on a surfboard, the class moves down to the beach for warm-up stretches before hitting the waves.

Students are also learning about surfing safety and culture.

“We didn’t go in the water for the first two weeks,” said student Noah Torjesen.

“We learned about surf etiquette, safety, tidal movements, how storms affect the waves, general oceanography, and wildlife and how to react to it,” added Unger.

A pod of dolphins swam along shore playing in the waves before approaching the class as they paddled out.

Van Duzer stayed on the beach with floatation devices, a backboard and a radio to call an ambulance. His partner paddled out with the class on a soft top rescue board and waited to the side of the waves.

“We’re city lifeguards so normally we would be working in a tower on the beach but during the off season the city contracts us out to the school and we watch over the class,” said Van Duzer. Leadbetter beach is known by locals to be a slow, forgiving point break, which makes it an ideal place to learn.

“It’s a great beginner wave,” said Van Duzer. “It’s super mellow and an easy paddle out. Occasionally it will get crowded but everyone is respectful.”

The course is a great start for anyone interested in surfing. It provides a relaxed, informative environment for students to try it for the first time.

City College provides students with foam longboards, which are the safest and easiest boards to learn on. The boards are durable so students don’t have to worry about dings or cracks like they would with a traditional fiberglass board. The only equipment students need to provide is a wetsuit.

High-end used wetsuits typically cost between $100-$150, but are considered to be well worth the cost.

Students interested in taking the class next year should make sure to register early, as it is one of the most popular courses offered at the school.

“I’ve been waiting three semesters to get into this class,” said Unger.