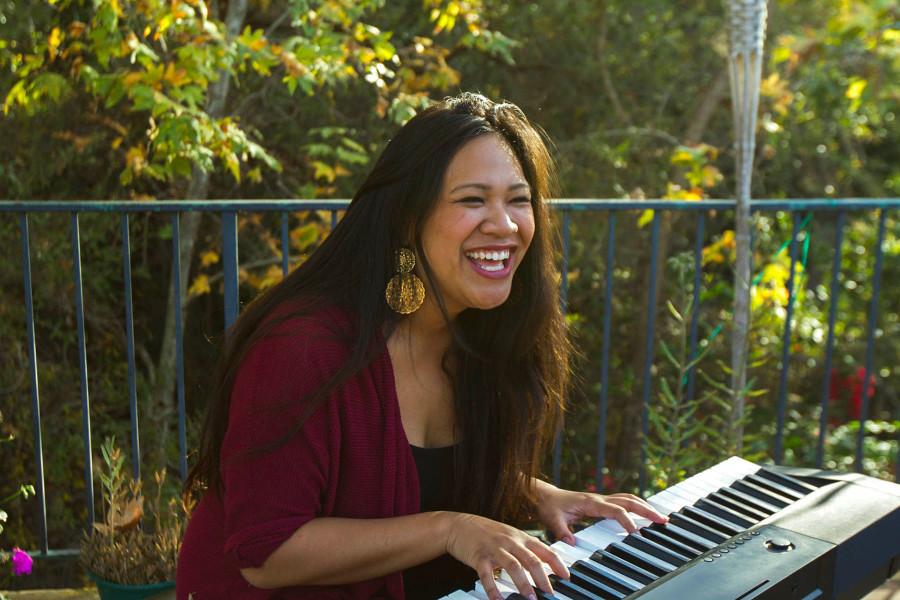 Leana Movillion sang with a voice and musical talent that won her the City College Encore Singing competition, pictured Sunday afternoon, Nov. 22 at her home in Santa Barbara. She is running her own business on the side while pursuing her musical passions.

Leana Movillion won the Encore Singing Competition that City College Ambassadors hosted at 7 p.m. on Saturday, Oct. 24, in the forum of the Business Communication building.

The 24-year-old majored in music with an emphasis in piano, and minored in education. Since graduating from University of California, Santa Barbara in 2014, Movillion has taken a handful of music courses at City College for personal enrichment.

“I really went into it just for fun, and have more performance experience because actually performing at the piano and singing is something that I don’t do very often,” said Movillion. “I enjoy doing it, but it’s not something that I’m pursuing all the time. Seeing [The Encore Singing Competition] as an opportunity, I jumped on it and I’m happy I did.”

Movillion grew up in Daly City of San Francisco, California. She began learning to play the piano at the age of six, and started performing only two years later.

“I do come from a musical family,” Movillion said. “My dad loves to sing, and my mom played piano and other instruments growing up as well, so I have that background.”

Her uncle is a professional keyboardist, who played in various funk, R&B and soul bands. Movillion believes his influence is the reason she developed an ear for other genres.

Movillion took piano lessons consistently throughout her childhood, in addition to participating in the National Guild for Community Arts and Education, and the Certificate of Merit. In high school, she joined the jazz band and won a soloist award for one of their competitions.

After starting college at UCSB, Movillion continued to build up her musical resume by getting involved in various organizations in Santa Barbara.

“Leana and I did Girls Rock together,” said Christina Apostolopoulos, one of Movillion’s close friends. “It’s a program in Santa Barbara that teaches instruments to young girls and they write a song together and perform it at the end of the session.”

Movillion interned at Kindermusik with Kathy and Friends for two years, where she helped Kathy Hayden run a multitude of music camps for kids. Hayden was hesitant to hire her for a while because of her young age; however, because of her “concert-level skill” and the fact that “children navigated to her,” Hayden eventually gave her a paid teaching position. Movillion has been officially employed at Kindermusik for about two years now.

On top of that, the San Francisco native teaches private piano lessons, and has her own flower crown business. She’s also a member of the Santa Barbara Soundwaves, an all female a cappella group that consists of post-collegiate women and City College students.

“Leana’s always been a huge sweet heart,” said City College student Nick Morrison. “She’s incredibly knowledgeable in music. I’d say the only thing that surpasses her great attitude towards just showing up and having a good time, would be her harmonic vocabulary.”

Movillion plans to go to graduate school to get a master’s degree in education, in an effort to pass on her love of music to future generations of young children.