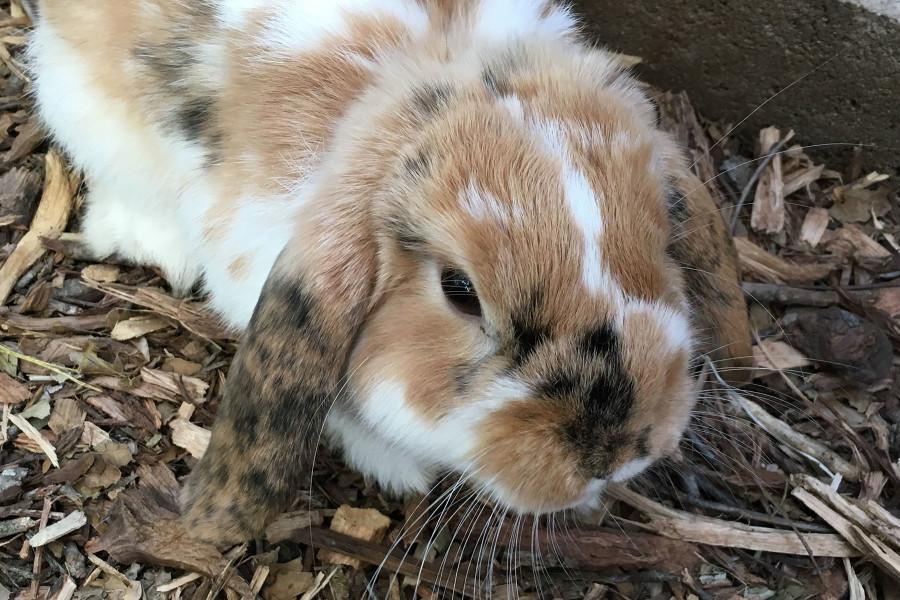 Luna and her brother Bugs (not pictured) are new to the Bunnies Urgently Needing Shelter organization, located at the Santa Barbara County Animal Shelter, 5473 Overpass Rd, in Santa Barbara. BUNS is an independent non-profit corporation dedicated to the care and welfare of rabbits and guinea pigs. (www.bunssb.org)

Rescued bunnies will hop to freedom and interact as one large herd at an upcoming event called Hoppy Hour, organized by a unique branch of the county animal shelter.

The rabbit and guinea pig rescue in Goleta, Bunnies Urgently Needing Shelter, is hosting Hoppy Hour as a community event and fundraiser at 1:30 p.m. on Nov. 7 at the Humane Society Lawn, at 5399 Overpass Rd., Santa Barbara.

Under close supervision from volunteers, shelter rabbits and adopted rabbits are brought back by their new families for the event and turned loose to play in a huge play pen.

“It seemed like it would be fun for the people and the bunnies,” said volunteer Jean Silva. She pitched the idea of Hoppy Hour to the other volunteers after she saw a similar event at a bunny festival in Northern California.

She said she thought it was a good idea because “none of the bunnies killed each other.”

“It was pretty funny,” Silva said. “They wanted to have a clicker training demonstration so they had a bunch of agility setups.”

Jessie Dove, former president and current treasurer and board member, said at first everyone thought the idea was insane. But after some deliberation, they decided to give it a try.

Participants pay an entrance fee of $10 and can purchase an additional claw trim. Bunnies are given a quick medical check before entering the pen, and must be spayed or neutered at least a month prior.

“Your bunny will almost certainly live a longer and happier life,” Dove said in support of spaying and neutering.

She also said that all supplies including fences, wood chews and other toys are brought from the shelter, allowing the event to be put on “fairly simply and quite inexpensively.”

The event is run entirely by volunteers and refreshments (for both people and rabbits) are donated.

The pen will be set up in a neutral area, which minimizes the chances of rabbits becoming territorial, Dove explained. Additionally, there are lots of snacks available as distractions, and all hiding places have multiple exits so rabbits don’t feel trapped.

Only volunteers are allowed inside the pen with the rabbits to avoid chaos. Their job as “Bunny Bouncers” is to interrupt arguments between the rabbits and ensure safety.

Hoppy Hour hasn’t had a large impact on number of adoptions Dove said, but she knows of several cases in which it helped families finalize their decision to adopt. Attendees also bring friends along who often end up as future bunny parents.

More information about the shelter and adoptable animals can be found online at the Bunnies Urgently Needing Shelter Facebook page, and on the County Animal Shelter website.