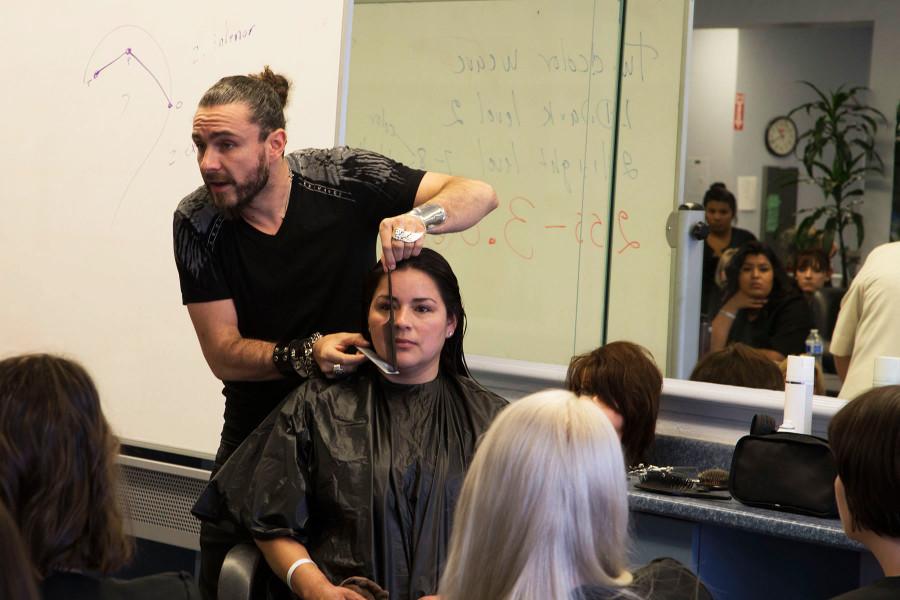 Raphael Perrier, a prominent hair stylist, demonstrates his hair cutting techniques on model Margarita Perez, a student in the cosmetology program, Tuesday, April 21, at the Cosmetology Academy in the Magnolia Shopping Center in Goleta. 'The most important part of a haircut is all the geometrics,' says Perrier.

The hair styling industry can be unpredictable, but City College’s cosmetology department has adopted Raphael Perrier’s cutting system to keep up with European trends.

On April 21, the notable hairstylist entered the gates of the Cosmetology Academy on Hollister Avenue to give cosmetology students a demonstration of important haircutting techniques.

Perrier is a four-time winner of the world hairdressing championship, OMC Hairworld, and has toured globally to teach his cutting system. After releasing his first teaching manual last year, he received a Golden Globe for education at the competition.

The instructors of the cosmetology department agreed last year to start using Perrier’s cutting technique and it has been part of the program since October. Griselda Rosas, chair of the department, believes it is important to have a role model for the students.

“The students have been looking up online what he does and who he is, so they were very motivated to see him,” Rosas said. “I have been in the industry for many, many years. This system is very consistent and updated at the same time.”

During the demonstration, Perrier used his own model to show techniques from different angles. Before diving into texturizing, he called up a student from the audience to the chair.

“I was so scared,” said cosmetology student Bree Jensen. “He teased my hair with his scissors. It was something that we have never done before.”

Perrier believes that the French hair styling trends create the agenda for not only Europe, but for the rest of the world. He tours to teach his knowledge and keep hairstylists familiar with upcoming trends.

“Everything starts in France,” Perrier said. “Then a few years later it comes here.”

Some of the students recognize this phenomenon and believe that European hair styling has become a model for American styles.

“Europeans in general are willing to take bigger risks,” said cosmetology student Jane Maher. “He told us about new trends that are coming. I thought it sounded really ugly, but I am sure that they will be legitimate.”

Perrier owns several salons, both in France and China. His business and hair styling techniques have become trademarked worldwide with his name.

“We are very lucky that we have the training from him,” Jensen said. “Because he is French and brings everything here, I think it really helps everyone to stay on the same page. The styles are not going to come sooner or later. They are coming now.”

Even though English is not his first language, Perrier managed to finish the demonstration and explain the importance of adjusting a cut after a person’s figure. When the show ended, a parade of students formed in front of him, waiting to take selfies and get their books signed.

“He was showing us reference points and how everyone’s head is different,” Jensen said. “This was not like any other book that we have. We actually got to meet him and see him doing the haircuts that are in his book. It was really cool.”