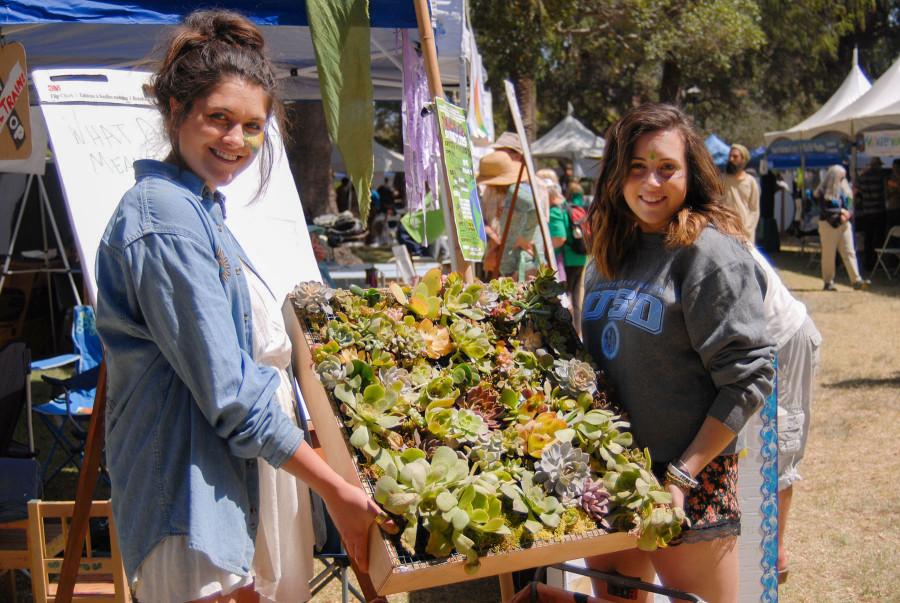 City College students Marisa Merola (left) and Sofia Silva display a sample of a green wall they are building in their Environmental Studies class, 'Projects in Sustainability,' Sunday, April 19, at the Santa Barbara Earth Day Festival in Alameda Park. The completed green wall will consist of different types of plants that hang vertically and will be displayed in the Luria Library at City College.

Students in Adam Green’s Projects in Sustainability class are working to create a vertical green wall to be displayed in the Luria Library.

The course gives students the chance to create, develop and implement a project that will make City College and the community more sustainable. When given this opportunity, students Shaylee Erickson, Karin Ferguson, Marisa Merola and Sofia Silva decided to build a vertical green wall for the Library to give students a splash of life amidst a Library full of books.

“Students are stressed out, probably haven’t been eating well, probably haven’t slept well, and they need to concentrate,” Professor Adam Green said. “So why not give them a beautiful wall of plants to be near as they’re studying?”

Green walls, which are basically plants grown on a vertical surface, are meant to serve a mix of aesthetic and functional purposes.

Besides adding beauty to the Library, Green and his students believe that this wall will actually help student’s productivity while they’re there.

“If people are exposed to nature,” Green said, “even if it’s as simple as plants or a tree outside your window, it tends to improve your mood, cognition, and ability to concentrate.”

The wall consists of nine individual squares that will make up an eight by six foot wall. Patrick Foster donated all of the wood for the frame. Grounds Supervisor Mark Broomfield donated succulents, and additional succulents were gathered from all around town.

“The thing about succulents is they’re really resilient and you can pick them from a larger bush and replant them,” environmental studies major Marisa Merola said.

Succulents are thick-leaved plants that are very prominent in deserts. They require very little upkeep because they store water in their leaves, which made them the perfect choice of plant for an indoor green wall. They’re also quite beautiful.

Green’s class gives relatively low instruction. He said he helps the students come up with project ideas they’re passionate about, then unleashes them to tackle it on their own.

“What’s motivating is this desire to do something sustainable, it forces them to go through the pain of getting it done,” Green said.

This class allows students, who are mostly horticulture-related majors, to work with all different realms of campus. Marisa Merola, an environmental studies major and one of the students working on the wall, worked closely with Patrick Foster, director of construction technology.

“It’s been a fun project because we’ve been working with a bunch of different organizations at City College,” Merola said.

Merola explained that working on the construction aspect of the project was more “her thing,” while each girl ended up specializing in their own job. Sofia Silva, an environmental policy major, focused more on the political side and getting the project to the Library.

“We have all found our niche, and are really close with one mentor,” Merola said. “We’re all bringing it together.”

Despite a seemingly flawless design and production plan, Silva said that there were, “many bumps along the way.” Nothing went as planned.

“Right now we’re still having a bump with facilities, making sure there’s nothing wrong with our project to be in the Library,” Silva said.

Merola said the original intent for the project was to improve air quality in the Library. Unfortunately, a wall this small would have little effect. The new goal became improving students’ study experiences.

“So, this has transformed and been such a good learning experience,” Merola said. “From having one idea, and watching it play out in an entirely different way.”

Both Merola and Silva agreed that this project was very difficult, but in the end very rewarding. They hope to have the wall finished and ready to display in the next two weeks. Then, they will survey students and see if it’s benefitted them in the way they have hoped.