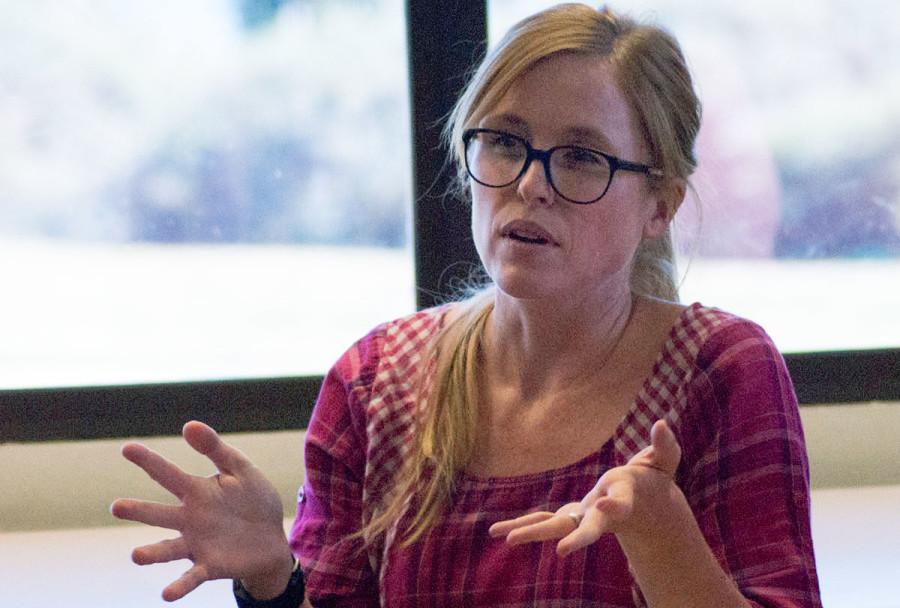 Geordie Armstrong, a professor in the Geology department at City College, speaks to students at the panel discussion ‘Prisons and Probation: Perceptions and Realities,’ Wednesday, April 8, in the Luria Library on West Campus. Armstrong is one of four women on the panel that spoke about experiences with the female prison system.

Packed in a tiny corner of the library, students gathered for the panel, “Prisons and Probation: Perceptions and Realities.” By the middle of the panel, all 50 seats were filled and students were standing in the back quietly listening to each speaker’s stories of their experiences with prison.

City College students got a firsthand account on the perspectives of prison and being incarcerated at this panel discussion, April 8, in the Luria Library. Four speakers shared personal stories of their different involvements with the prison system from around the world in attempt to offer various viewpoints.

The panel was held to engage and bring together students and faculty involved in the Santa Barbara Reads 2015 book, “Orange is the New Black.”

Library Director Elizabeth Bowman handed out five free copies of the book at the beginning of the panel to liven the crowd.

Eiko Kitao, an earth and planetary sciences laboratory teaching assistant, was the first to speak at the panel. She stunned the crowd with her honesty and story of methamphetamine abuse that lead her to do four months in county jail housing.

She casually chatted about her experience with other prison inmates at the time and made the crowd laugh about being the only Asian women in the entire jail compound.

“Orange is the New Black” is a memoir about a woman’s experience in a federal prison and Kitao related with a lot of the relationships that the author, Piper Kerman, wrote about.

“A level of awareness is so important in order for people to understand how funky the system really is,” Kitao said.

The next speaker was City College student Tongee Tomlinson. Tomlinson was in the Santa Barbara County Jail for two years fighting his offense but was sentenced to four years for drunk driving with a fatality.

Tomlinson reflected on the experience and how incarceration as a woman is extremely degrading.

“You see women who are naturally caring and nurturing turn animalistic, mean and vindictive,” Tomlinson said.

Kristianne Clifford, a former inmate who spoke at the panel and is also the founder of the Freedom to Choose Foundation, shared her story of how she came to spend 18 years in federal prison.

Her experimentation with hard drugs as a young adult was for a brief six weeks, but it was enough to cost her life when one night she was pulled over. Unaware of the trouble that was brewing in her back seat, where a person was being tortured. Clifford was sentenced to life in prison for conspiracy to commit torture.

She connected with the shocked crowd of students by discussing her familiarity with Isla Vista and experimenting with drugs at a young age.

“It is sad for me that I had to receive a life sentence in federal prison in order for me to figure things out in my life,” Clifford said.

The last to speak was Geordie Armstrong, a city college faculty member, who had done her Master’s research on women in prison in Ecuador. She told the crowd of already stunned students about her research results during her six-week stay in a woman’s international prison facility.

Armstrong went into detail about the relationship between women’s jails around the world and the reputation of women doing time. She spoke in a strong and empowered tone as she urged the crowd to question our society and the stereotypes women receive in general.

“What is the value of women?” Armstrong asks the crowd. “How they see themselves.”

The panel discussion concluded with a brief question and answer period where student’s hands shot up with aching questions for the diverse group of women, all with different experience with the prison system.