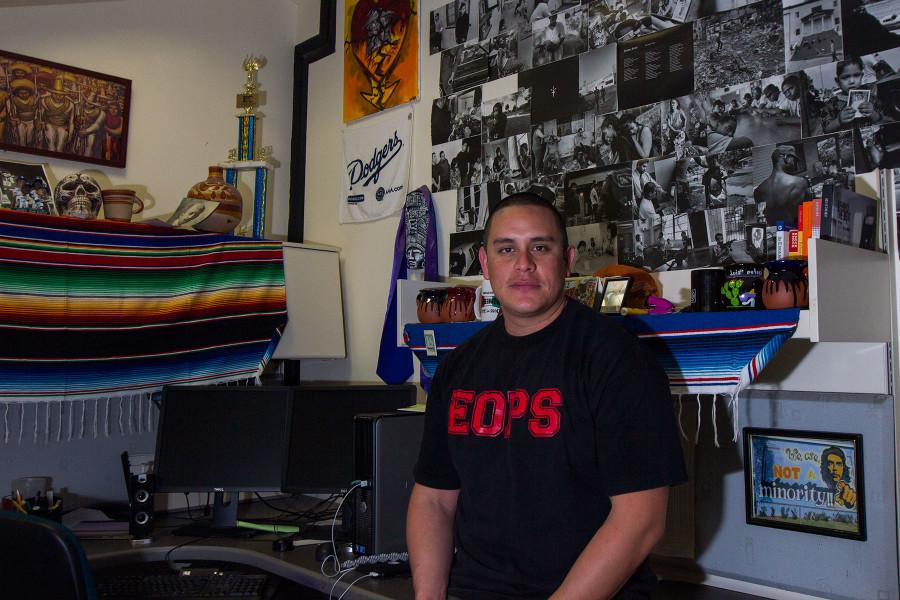 Noel Gómez is a Student Program Advisor and the Instructor of the Transitions Program, Friday, March 13, in his office in the Student Services Building on East Campus in Santa Barbara. Transitions is a six-week summer course that brings access to higher education back into the lives of former inmates.

For eight years, the Transitions program at City College has seen people from the California justice system trade their prison uniforms for graduation gowns.

The six-week-long program is designed to help people on parole or probation adjust to college. Once completed, the Extended Opportunity Programs and Services department helps students with academic counseling, tutorial services, and textbook grants.

Transitions was founded in 2008 by Martin Leyva and is led by Noel Gomez, an equal opportunity counselor.

Gomez grew up in Boyle Heights, a neighborhood notorious for its gang influence. After a life-or-death situation as a teenager, he decided to apply to college. After being accepted to the University of California Santa Barbara, he went on to complete his Masters of Education at Harvard University.

“Honestly, this is the longest job I’ve ever had in my life,” Gomez said. “I’ve been doing Transitions since 2008 and I never could have been more satisfied. A lot of this is due to seeing the growth that they go through and to be a part of it is a very rewarding experience.”

On Friday, they are taken on field trips around Southern California to places such as Homeboy Industries, a gang prevention program and a ropes course at UCSB to teach teamwork and professional development.

Isaac Hernandez completed Transitions in 2011 after being incarcerated most of his young adult life. He was involved with gangs at 12-years-old, dropped out in the eighth grade, and went to prison at 18.

Students are given a free meal voucher worth about $7 to use on campus every day of the program.

Hernandez said that no one would hire him, not even McDonald’s, because he had nothing to put on a resume after being behind bars for so long. Now he is working as a tutor and was recently accepted for an internship at Brown University this summer in the engineering department.

Lupe Leyva did Transitions in the same session as Hernandez, and the two became best friends despite representing opposing gangs. Leyva also discovered through the program that Martin was his long-lost first cousin.

“All that put together is really unbelievable,” said Leyva, who spent most of his teenage years surrounded by cell walls. “I was comfortable doing time since I been a kid. Over there, you want to be part of a gang,” Leyva said.

Transitions is well-known throughout Santa Barbara’s correctional system as well as local high schools, although most people learn about it through word of mouth.

Hernandez heard of Transitions through a counselor at Community Solutions, a parolee program that Gomez spoke at.

Leyva found an article written about Transitions students in The Independent while looking for a coupon for a strip club.

Graduates of the program recall Transitions as giving them a sense of community, a place where they can be themselves in an unfamiliar setting.

“It was a place where you know everybody has the same background so you don’t have to act like someone that you’re not,” Leyva said.

After being released from juvenile hall at 17, Lujano worked for a while before failing out of one semester at City College. After a hiatus, Lujano came back to City College and revaluated his education through the Transitions program in EOPS.

Lujano says Transitions was a chance for him to see people from the justice system learn how to conduct themselves in society.

“I’ve seen people facing life, people who have been in and out of the prison system who have turned their lives around through this program,” said Lujano. “If we could get this implemented in other city colleges, we would really see the impact of what education does to free the people who are incarcerated. To give them real freedom.”