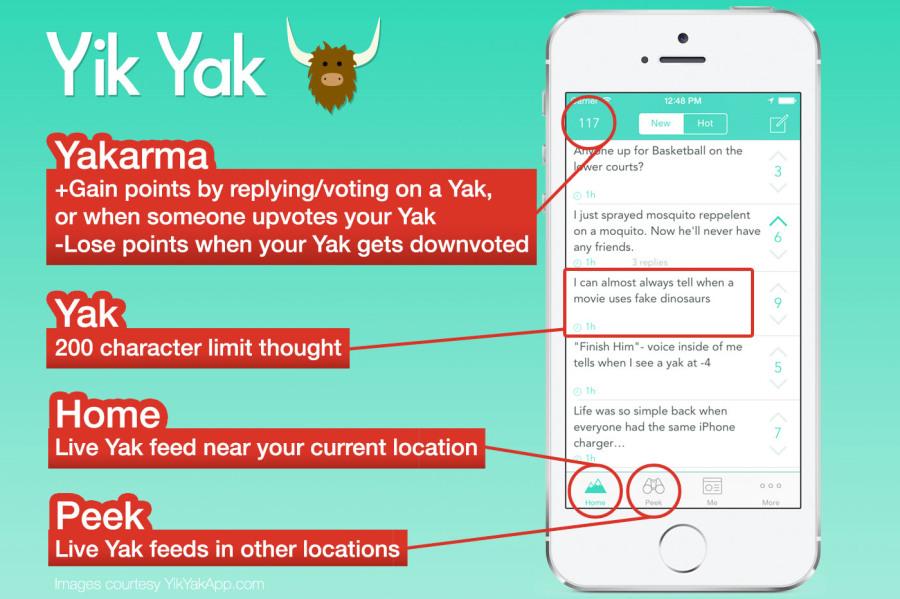 Amid waves of skepticism due to reports of bullying and other questionable behavior, a new app and social media platform is taking college campuses by storm.

Founded by two Furman University students, Tyler Droll and Brooks Buffington, Yik Yak is a new app directed towards college students where users can anonymously post Twitter-like anecdotes then receive up or down votes by other users within a mile-and-a-half radius.

“People are able to post whatever they want, while staying anonymous and then the community around them gets to see their posts or ‘Yaks’ and up vote or down vote,” said Cam Mullen, the lead community developer at Yik Yak.

Yik Yak was created with the idea that it could be used around college campuses as a way for people to anonymously stay connected with one another and communicate about goings-on around campus. The thought was that it could be a place where people could vent about mid terms, warn each other about upcoming tests, rag on professors, talk about something funny they witnessed, or simply post a amusing quote or line, all without anyone knowing it was you that posted it.

“I think it got so popular because kids aren’t used to saying things anonymously so the things they have on their minds, whether it’s their girlfriends, boyfriends, or people in Isla Vista they might find attractive, they can just say it and get it off their chests,” said Constantine Samios, a student at City College.

Unfortunately, here in Isla Vista, the anonymity almost seems to be a bad thing. People are putting less effort into their posts than they might if it weren’t anonymous. Most of the posts end up being lonely freshman posting about their sexual frustrations rather than people putting effort into posting something that other users could relate to.

And, according to Samios, that is the trick to getting up votes.

“You just gotta be real. If they (Yaks) don’t relate to people, then no ones gonna up vote it,” said Samios.

The idea is definitely there, and Yik Yak’s 26th ranking on the Apple Store’s Top Charts shows that people are into it.

“I think it’s popular because everyone is searching for something new, especially when it comes to social media,” said Samios.

Inevitably, as the app got more and more popular on college campuses, the younger generation caught on and wanted a piece of the action.

Obviously this is not what founders Droll and Buffington had in mind when they created the app and in March of 2014, following a bomb scare at San Clemente High School, Yik Yak coordinated with Maponics, a third party data provider in order to access GPS coordinates of middle and high schools all over the country.

With this information the app was able to put ‘geofences’ around 100,599 public schools and 28,111 private schools all over the country. So far they have managed to fence off around 85 percent of schools in the country.

These ‘geofences’ basically prohibit users from accessing the app if they are within a close proximity to a school other than a college campus. The message to students where the app is blocked is something along the lines of: ‘it looks like your trying to use Yik Yak on a middle or high school grounds. Yik Yak is intended for people college-aged and above. The app is disabled in this area.’

The Yik Yak creators are aware of the negativity surrounding the app and seem to be doing everything in their power to return the app to its initial goal: to create a fun app, free of bullying and other negativity.

“Most startups are concerned with grow, grow, grow, grow. We want to grow and we want to be huge, but we also want to make sure that we are creating sustainable, good communities too,” said Buffington. “That’s number one on our list. We didn’t create Yik Yak so that people could target other individuals.”