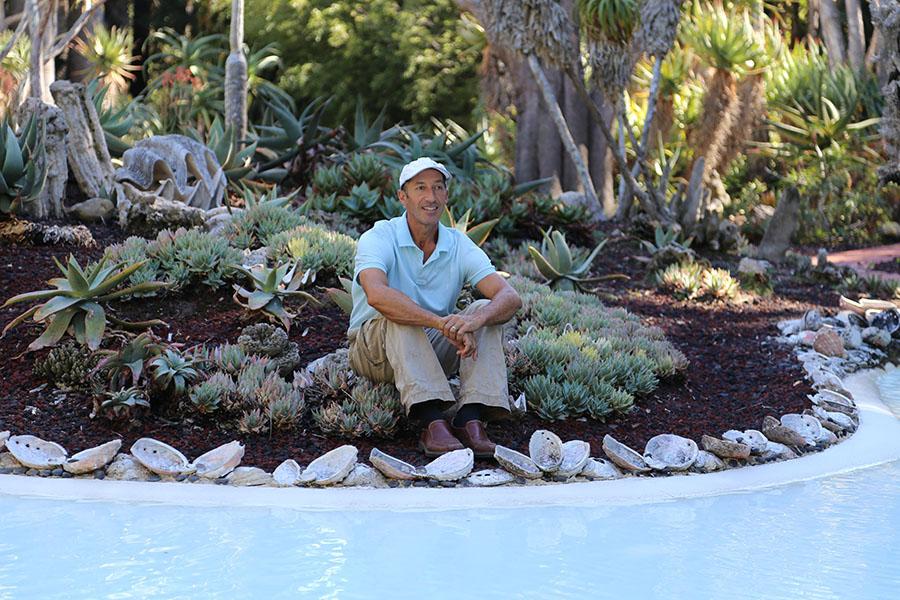 At eye level with a trail of blooming, vibrant flowers, his fingers dance swiftly, feeling each glowing petal as he recites every possible detail from its genus to its last watering.

Corey Welles, 51, a City College alumnus is the plant health care coordinator of Ganna Walska Lotusland, a botanical garden hidden in the hills of Montecito. He knows every detail about any of the 3,000 different types of plants they grow and speaks of each with a rare, contagious level of passion. He emphasizes that California’s major drought hasn’t affected any plants because of the garden’s sustainable program, which he also introduced to City College in Sept. in order to strengthen the school’s horticultural system.

“The drought has no effect on us at all. We’re actually doing better now since we’re using the organic program,” Welles said, talking about the new measures they’ve taken to increase the long-term health of their gardens.

He points to a small section under the shade of a group of trees, hanging above a walkway with strangely psychedelic-looking flowers peaking out.

The new horticultural program’s work is apparent. As he walks through each of the gardens, his face lights up with genuine curiosity as he touches and examines the things he sees everyday from small shrubs to large Chilean Wine Palms.

“I just get my mind blown by the plants, the architecture, the whole thing,” said Sami Weiss, a Lotusland regular.

The range of pigments is astonishing. There are mixes of colors and hues that pop at every corner dying to catch your attention. Welles points to a seemingly rare plant and recalls on the times that they would spray plants to superbly enhance their color for short periods of time.

“Chemical sprays used to occur almost every day, but instead we gather compost and put it in to a state-of-the-art machine to make a compost tea to spray for a healthier, more long-term lifespan,” said Welles.

He scoffed at the mention of chemical spray. Just from his facial expression it was apparent that it would always be a last resort.

“The chemicals, I’m licensed to spray them. But I’d rather not do it unless it was the last of kind. It’d be a small spray anyways,” said Welles, as he walked through the garden surrounded by colorful aloes.

Welles remembers being constantly told by chemical specialists over the phone that he was spraying chemicals wrong and that he needed to add more. When he added more, rare plants died and caught diseases, but as long as there was a specialist on the other line he continued until he was told otherwise, knowing they were dead wrong.

But now, after 24 years, he holds the reigns for decisions and after chemicals were strongly discouraged following the destruction of so many plants, he sticks firmly with his belief that the gardens are more than just plants.

“There is not just a ‘plant world’ or just an ‘animal world.’ It’s one world,” said Welles. “If we leave all the critters and insects alone, we keep a balance. And that’s what makes this place what it is.”

Welles is bringing his expertise back to City College after graduating in 1989, and has now started training the school’s grounds crew on usage and sustainability.

“You can’t just give up when you hear ‘drought’,” said Welles. “If anything, the drought can just teach us all how to garden in tune with our own environment.”