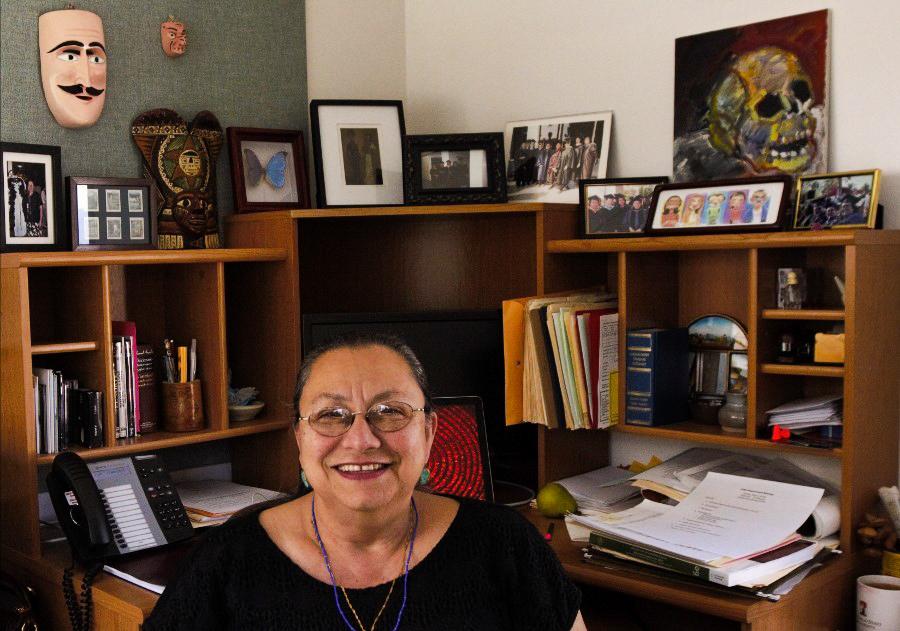 Dr. Sonia Zúñiga-Lomelí, Spanish professor, takes a break between her self-paced Spanish classes in her office on Tuesday, May 6, in the Humanities Building. Zúñiga-Lomelí has been a full-time professor at City College since 1990.

When a Honduras native landed in New York she watched movies with subtitles to learn English–now she teaches her first language to English speaking students.

At two in the afternoon a Spanish professor walked into her dean’s office for a meeting–suddenly the door swung open and she saw a bouquet of flowers.

After a few minutes, Dr. Sonia Zúñiga-Lomelí, Spanish professor, realized she was the 2014-15 faculty lecturer. Next spring she will deliver one of the most respected speeches on campus. Zúñiga-Lomelí is the first professor in the School of Modern Languages to have this honor.

“I cried and I still cry when I think about it. It’s very emotional because it’s sort of like The Oscars of what we do here,” Zúñiga-Lomelí said. “There’s a tradition of ambushing teachers to surprise them. I’ve heard of individuals who are in their office and they barge in and in my case it wasn’t that.”

Faculty lecturer is the highest honor given to a full-time professor each year. Zúñiga-Lomelí’s colleagues are excited to have her represent the department.

“Inside and outside of class she’s the perfect ambassador and bridge for our department,” Juan Casillas, Spanish assistant professor said. “It’s a pleasure working with her because I’m proud to work with someone who’s such a go-getter. Sonia is more like family than a co-worker and I think I’m not the only one who feels that way.”

Francisco Rodriguez, Spanish professor, said every semester she demonstrates a passion to educate. Rodriguez is one of many who wrote a nomination for Zúñiga-Lomelí.

“We will all appreciate the role model of a woman… who has dedicated her life to helping our students understand and communicate with the world,” Rodriguez wrote in an email.

During her 30 years at City College, Zúñiga-Lomelí has transformed the School of Modern Languages. She took leadership in the initiative to offer curriculum for many languages, such as American Sign Language, Hebrew, Arabic and Chinese.

Since Zúñiga-Lomelí’s joined City College, the department has doubled in languages offered.

“Language is an amazing thing that we humans have created. When I believe in something I push it, but the success of what I have speared has been my colleagues,” Zúñiga-Lomelí said. “Ideas are a dime a dozen, it’s doing them that makes the difference.”

Zúñiga-Lomelí said what once was a small Día De Los Muertos display case, has expanded to an annual community event. Different departments and the Luria Library are involved in the festivities.

“To me the Day of the Dead is a beautiful expression of such a universal experience. We all are going to die. It’s a beautiful way to remember those who are not with us anymore,” she said.

When she first landed in America, she realized her mother had bought a one-way ticket to New York. Zúñiga-Lomelí’s mother sacrificed her job to start a new life and ensure proper education for her daughter.

“I had to adjust. I realized I was in a country where I spoke no English. To think that I was 15 when I first came to this country, English is not my first language,” Zúñiga-Lomelí said. “I’ve been able to take advantage of all the opportunities that have been given to me in this country.”

In Brooklyn she attended an all girls high school and made friends with Puerto Rican students. As a young girl she joined Aspira, a nonprofit organization devoted to the education of Latino youth.

“They became my lifeline really when I was in that transition coming from Honduras to here,” Zúñiga-Lomelí said. “It was something else. It was a totally different culture.”

After graduation she attended Queens College, City University of New York. During a summer program, she taught Puerto Rican culture to minority high school students and fell in love with teaching.

“I thought, ‘hmm I like that’ and what I like most was that I saw the reaction of the students when they learned something new. It was fabulous when it clicked,” Zúñiga-Lomelí said. “They became aware of the fact that they were hungry to learn. That sparked my interest in teaching. I sort of became addicted to that–to seeing students learn.”

After Zúñiga-Lomelí received a Bachelor of Arts in applied linguistics, she enrolled at the University of New Mexico to get her Masters degree in Spanish linguistics. However, Zúñiga-Lomelí took a course in literature that changed her life.

She attended UCSB to finish her master’s and holds a doctorate in Spanish literature and culture.

“I’ve always had an interest in languages for some reason and it was natural,” she said.

Zúñiga-Lomelí lived in Chile, Costa Rica and New Mexico, but Santa Barbara is where she has made her home.

She began as a part-time instructor at City College in 1984 and has been a full-time professor since 1990. She teaches self-paced Spanish courses in the Humanities Building and her students get one-on-one attention.

“Sonia has been great. She definitely helps out in every aspect and works with us all the time,” said Nick Almanza, 23, film production major and student in Zúñiga-Lomelí’s Spanish class. “She is a really great instructor and she wants to see students succeed.”

Zúñiga-Lomelí has begun to ponder her theme for next year’s speech and said she will discuss the topic of language. Until then she plans to continue to inspire people to acknowledge the importance of culture and language.

“I think I’m going to teach as long as I’m healthy. I enjoy it, I really do like working with students and I get excited when I hear all their plans of all the things they want to do,” Zúñiga-Lomelí said. “It’s nice to know that you’re having at least a little bit of a role in that.”