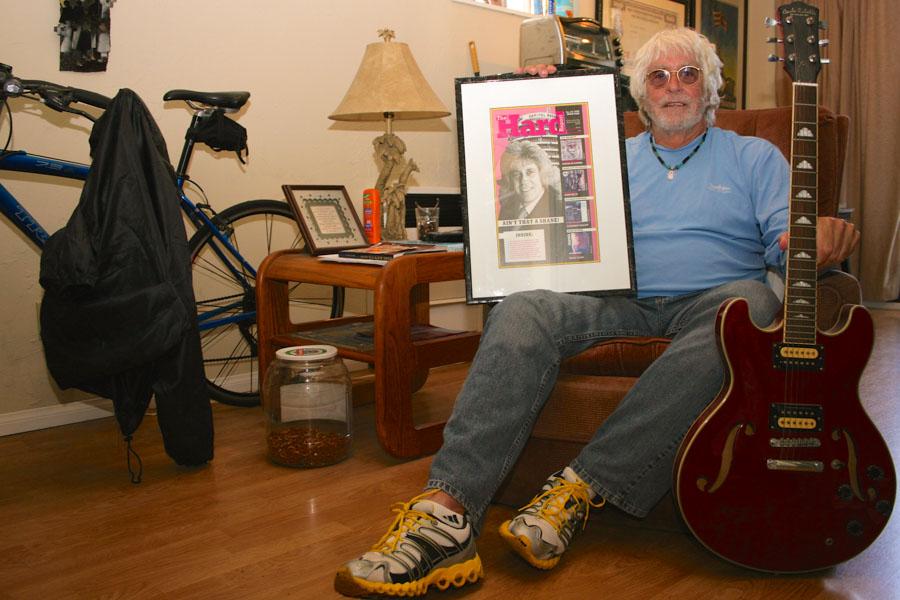 Former vice president of rock promotion at Capitol Records, Jeff Shane, sits in his home in Montecito, Calif., on Monday, April 28. Shane is currently enrolled in the City College Drug and Alcohol Counseling program and plans to use his certificate to help others.

Cocaine, pockets full of pills, pre-rolled joints and his obsessive compulsive disorder were always mobilized; this was the norm for the former vice president of rock promotion at Capitol Records.

“I’ve participated in the use of pot and hallucinogens. In the 70s, I used barbiturates and Quaaludes–cocaine in the 80s–cocaine in the 90s–fortunately I never jogged on cocaine–but yea, I used cocaine with pain pills then. Alcohol and pain pills came in the 2000s and then I became an alcoholic until the very end.”

Now retired and in recovery, Shane devotes most of his time to helping others. He volunteers working with Alcoholics Anonymous as well as speaking at jails, hospitals and sober living homes.

He is benefiting from his past in the Alcohol and Drug Counseling program at City College, striving towards becoming counselor. Currently, he’s an active sponsor for individuals with disabilities.

Success and celebrity connections cloaked the truth behind Shane’s disease during the majority of his adult life. Shane partied with many famous people. He claims he even helped create the saying “sex, drugs and rock n roll.”

“I never got behind the wheel without at least smoking a joint first… how lucky was I that I didn’t cause some catastrophe?” Shane mentioned.

At 30 years old, Shane began working in the mailroom of Columbia Broadcast System, in 1978, which is now Sony Music Entertainment. He’d been in the music industry since the 1960s, working for the creator and host of the television show ‘American Bandstand,’ Dick Clark. This nurtured his natural communication skills, leading to him earn a position as the promotion manager of the state in Florida within a year.

“He was the best in the business and I know this because of all of his awards and through just hearing people speak of him,” said Richard Green, executive counselor for business and legal affairs at Capitol Christian Music.

Shane transitioned to Capitol Records as a local promotion manager in Florida. That lasted for a year until he was moved to California in order to be the director of rock promotion. He was hastily promoted to senior director—then soon after to vice president of rock promotion at the Los Angeles headquarters.

“My job was tremendous fun because I got to take babies and make them into adults as I’d create artists that nobody knew yet,” said Shane. “I won a lot of promotion awards because I was the first guy to get a lot of records played on the radio, which started the careers of many artists.”

Green has been a best friend to Shane since childhood, as well as also working for Capitol Christian Music. When it came to Shane’s drug addiction, he was unaware.

“I’d love to say I knew all about it, but I just didn’t know,” said Green.

The most tenacious challenge of Shane’s career was himself.  No matter how hard he tried to destroy his body, he failed, even with an attempted suicide. The amount of cocaine he consumed could have killed him.

“My job didn’t offer any personal obstacles because I was good, but when I went home…that’s where the obstacles were,” Shane said. “I wasn’t available in my personal life. My family was my business and success. I lost track of reality and what’s important as a person.”

In the past, Shane was infamously known as “The Chemist,” because he’d never used just one drug at a time— it was always a custom blend. He referred to the approach to his habit as being a “mixologist.” While working in the music industry, he’d use during all waking hours. The work was always taken care of with success, and in response, nobody questioned his personal life.

“My job was like this: don’t tell me how you do it, just do it,” said Shane. “I was basically allowed to do whatever I wanted.”

His moment of clarity, that all those in recovery experience, struck him at the age of 63, in North Miami Beach, Fla.

“I was convinced I was going to have to put my dog to sleep,” said Shane. “I could only cry with the loss of an animal, not a family member. I was emotionally deprived for 47 years. I was alone in my living room, and I don’t know what triggered it, but I fell to my knees and said, ‘God, I can’t take this anymore.’ I can’t remember the last time used the word ‘God’ before or since then.”

“I help my people with getting food, doing laundry, going to the YMCA, or whatever it is they have to do,” said Shane. “I have a 45-year-old client with autism and another young man with cerebral palsy that attend SBCC. We’re in the process of starting a non-profit foundation to educate people about disabilities.”

Once Shane began recovery, he discovered that he’s an “emotional infant.” He was hiding from the world without it knowing—even he didn’t know. He realized what a struggle it’s going to be with feelings and emotions.

“Sometimes when I leave class, I have to stop and meditate for five minutes just to catch my breath,” he said.

The most significant day of Shane’s life was when he quit using drugs and alcohol. Despite all of his success in the music industry, his life has now become “simple” and he’s finally learned to love himself for the first time. Now when he wakes up, he naturally feels like he’s had a “couple lines of cocaine.”

“I’m still obsessive compulsive, but I buy smaller things instead of houses and cars…now I buy sneakers,” he said. “I still get to help people and I also live in the same city as my grandkids so I get to watch them grow up—now that’s cool.”