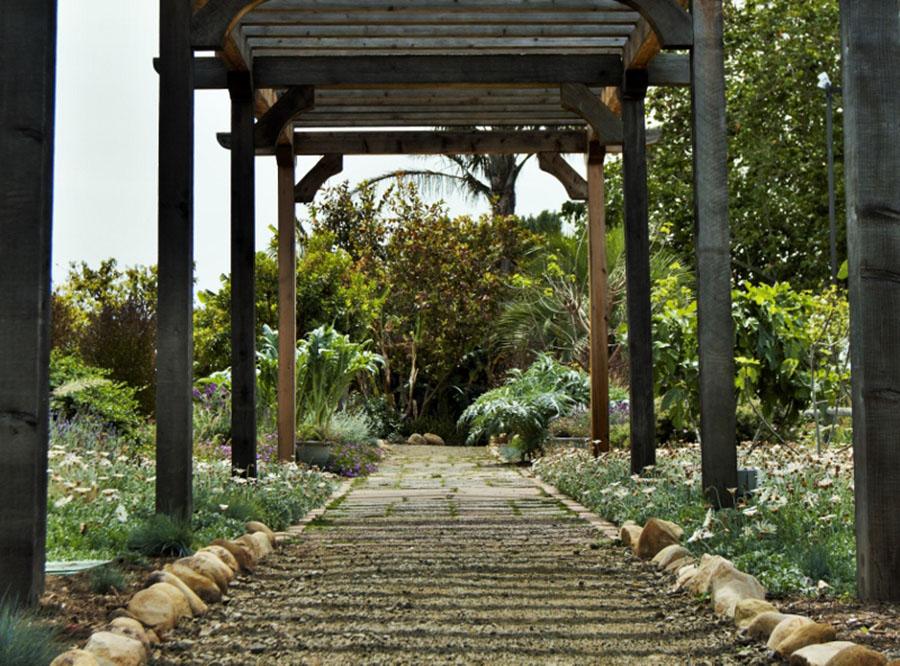 This is the entrance to the Ethnobotanical Chumash Point on Friday, April 25, at City College, in Santa Barbara, Calif. Chumash Point is a collection of plants native that are culturally important to the Chumash Native Americans.

The Chumash, originally known as Cañaleno, represents one of the oldest populations that inhabited North America.

According to tradition, their origins rooted back to the Santa Cruz Island, where their God, who eventually allowed them to reach the California coast through a magic rainbow, first created them.

The land adjacent to the Lifescape Garden has been exposed to erosion since the 80s and nothing could ever be built on it.

The skull was certificated as a part of a Native American burial ground, and in turn City College decided to dedicate the edges of the cliffs on both campuses to the Chumash tribe, Professor Emeritus and former Chair of the City College Environmental Horticulture Department Jerry Sortomme explained.

Nevertheless, the realization of the Chumash Preserve on East Campus required a particular care. Not only because of the land’s sensitive conditions, but because it represented the last untouched Chumash area.

“It’s almost a hidden part of the campus,” Sortomme said. “Most people don’t even realize there’s a walk there, and it’s one of the most beautiful views in all of Santa Barbara.”

The Native American communities agreed to cap off the area to better protect its spirituality and sacredness.

“But at the beginning there were some concerns about what to put on top of it,” said City College Native Americans Scholar, Tina Foss.

Sortomme said City College had to follow the California State Coastal Commission planting guidelines, which strictly required the planting of native plants from the local area. More specifically, the planting of those types that grow in the geographical area between City College and Las Positas.

“Some of those plants had to be grown by our own students to make sure they were the right kind of plants,” Sortomme said.

On a semicircle of rocks stands at the Chumash Point. Sortomme and his family held a prayer ceremony honoring the effort to create the new spiritual point. All the Native Americans groups came together and even presented Sortomme with a walking staff for protection.

City College shows signs of Chumash activity on several other points of campus.

For instance, the entire portables area between the parking lot and the Cafeteria on East Campus represents what Native Americans would call a “midden,” namely the designated area for the Indians’ domestic waste.

“A midden is a dream for archeologists,” Sortomme said. “And the temporary buildings broke into them.”

The Chumash spirit will continue to fill City College’s campus for future generations.