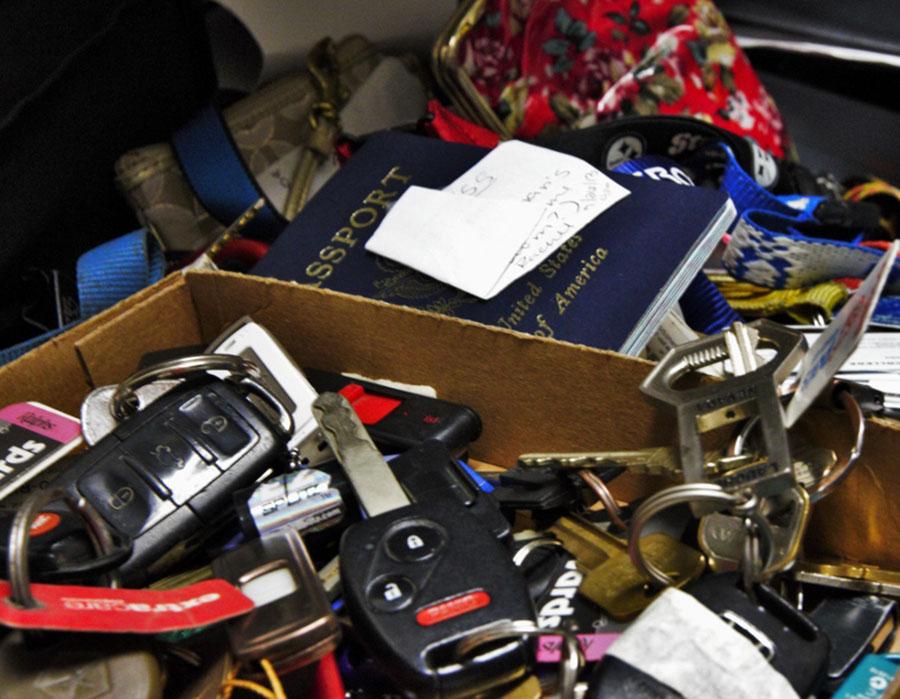 Items such as car keys, passports and laptops are some of the things stored in Room 219, in the Campus Center building on Friday, April 25. The Lost and Found is open daily Monday to Friday.

Like a treasure chest in the Campus Center Building, boxes of lost laptops, cellphones, car keys and designer sunglasses are just waiting to get picked up.

Well, claimed by their rightful owner.

Room 219 is the Lost and Found room at City College and is a place not many students know about. It’s not very big, but it’s the home to hundreds of lost items with an uncertain future.

“I don’t know why people don’t realize that we have a Lost and Found,” Student Program Adviser Amy Collins said. “Maybe we need to advertise more, put signage up or something.”

Collins has an office right next to Room 219. She has worked on campus for 14 years and doesn’t understand why most items aren’t picked up.

“It’s amazing because we get wallets, we get iPhones, we get MacBooks. We get expensive items that people don’t even come look for,” Collins said.

Water bottles are at the top of the list of most lost and found items, along with student ID cards, thumb drives, earphones, cellphones, keys and clothing.

“I was at the school library front desk today and they told me there was a Lost and Found by the cafeteria,” Zhu said.

Andrew Altwer, another 21-year-old student, came in just a few minutes after Zhu, looking for his motorcycle keys. Altwer found out about the Lost and Found through a security worker.

The information about the Lost and Found can be better advertised on the website, said both Zhu and Altwer.

When an item with identification gets turned in, it’s easier to get it back where it belongs.

“We do all that we can to find the owner,” Collins said.

Although most items received are ordinary, there are some exceptions–false teeth, an oxygen tank, a license plate from a car and about $3,000 in Dutch money.

Of course there are students who know about Room 219, but hundreds of items usually find their way there through others. Teachers bring in forgotten objects from classrooms and security workers drop off items found on campus. A lot of items come from The Luria Library.

Reclaiming a lost item requires the owner to go to the Office of Student Life in the Campus Center. Describing the item in detail is crucial to make sure it ends up in the right hands, Collins said.

By 11 a.m. on March 18, five students had already come in looking for something they had lost. But still, compared to how often things are turned in, it’s not much, Collins said.

“We have to keep everything for 90 days,” she added.

Collins said after those 90 days, depending on what it is, it will either be disposed of or donated to different charities in town.