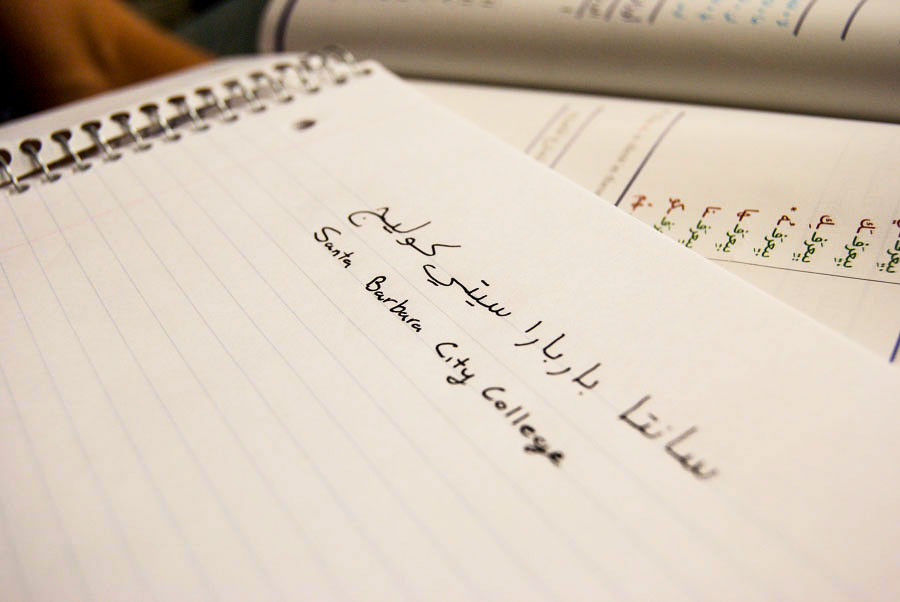 While Spanish is stressed as an important language for Americans to learn, the rise of Middle Eastern international affairs has pushed Arabic into the limelight.

Arabic is the official language of more than 20 nations and the fifth most commonly spoken language in the world. However, few Americans can speak or write it. City College offers basic Arabic classes to help students master the complex linguistics and cultural nature.

“The beauty of the language has to do with the revolution of the language. It’s a luxury that City College can have and support the Arab program because not many other city college’s have it,” said Jazmine Puignau, Arabic instructor. “Those who continue Arabic excel, and jobs in the Middle East pay well.”

“We have a lot of students working in the Special Forces and working for the government. It’s a critical language,” Puignau said. “We have many that were working soldiers serving in the field and when they are out of that they want to learn the language because they want to continue helping the government in different ways.”

The U.S. government has named Arabic a language of importance for trade reasons and security, meaning that jobs for bilingual Arabic speakers are at a premium.

Puignau said Arabic is important because of the economical and political relevance of the Middle East, as well as for its rich cultural legacy in the West. There are multiple jobs in public service, from being a translator to gathering information for a foreign embassy or government agency.

“This is an honor just to train these students. They’re going to continue and when they’re done with the Arab program, they’re prepared to jump everywhere,” Puignau said.

Those who speak Arabic are also positioned to pursue careers in non-governmental organizations, hospitality, banking, education, consulting, medical services and a variety of careers in the business industry.

In addition, the language is popular because many students have obtained fellowship to study abroad and continue online Arabic courses. Some receive a Critical Language Scholarship, study in the Middle East or continue Arabic at university level.

“The rate of students that continue their studies here in the states and abroad is really high especially those who get international fellowships and fellowships from the American government as well,” Puignau said.

Black chalkboards surround the classroom walls in the Interdisciplinary Center Building where Puignau teaches Arabic classes. The courses are offered within the School Of Modern Languages department.

For 17 weeks students can enroll in either Arabic 101 or 102. Puignau supports students at every learning step, helping them perfect the written and spoken language while learning an introduction to Arab culture.

The first challenge is to learn the Arabic writing direction from right to left in horizontal lines. Students learn to type in Arabic because companies require employees to have this skill.

“This is a class for really hard working students. We type in Arabic, we do Facebook in Arabic, we Google in Arabic and these are very concrete skills that the student need even just to communicate,” she said.

After mastering the language, the course helps students find jobs.

“In the beginning we have a lot of students, but at the end because it’s hard those who continue are the excellent students,” Puignau said.“We also have a workshop inside the class that tries to give a profile of the student and see where they can go and apply later. It’s like an orientation workshop, to see the profile of the student and give the chances to get a better job or fellowship.”

Puignau has taught Arabic for more than eight years. Originally from Uruguay, she received a bachelor of arts in political science and economics, a master’s in theology, and her doctorate in Christian and Islamic political theology from UCSB. Puignau can also speak five languages and has taught Italian at City College.

“The success is really high compared to other classes I’ve ever taught. Arabic is a very logical language. Compared with the other languages that I know and taught, it’s the only one, which developed as a science because there is grammar for religious purposes,” Puignau said. “It’s an honor because I can see the results and rate of students.”

Even though a majority of Puignau’s students are political science, health and sociology majors, she said some are enrolled in the class for cultural expansion. Many are from the community and want to freshen up on the grammar.

Yuri Terao, statistics major, enrolled because her husband is half Arabic.

“If you understand Arabic you can understand there’s nothing in the religion or culture that is against American values. They [students] come with a lot of misconceptions,” Puignau said. “You have Arabic for political reasons, for family reasons and culture.”